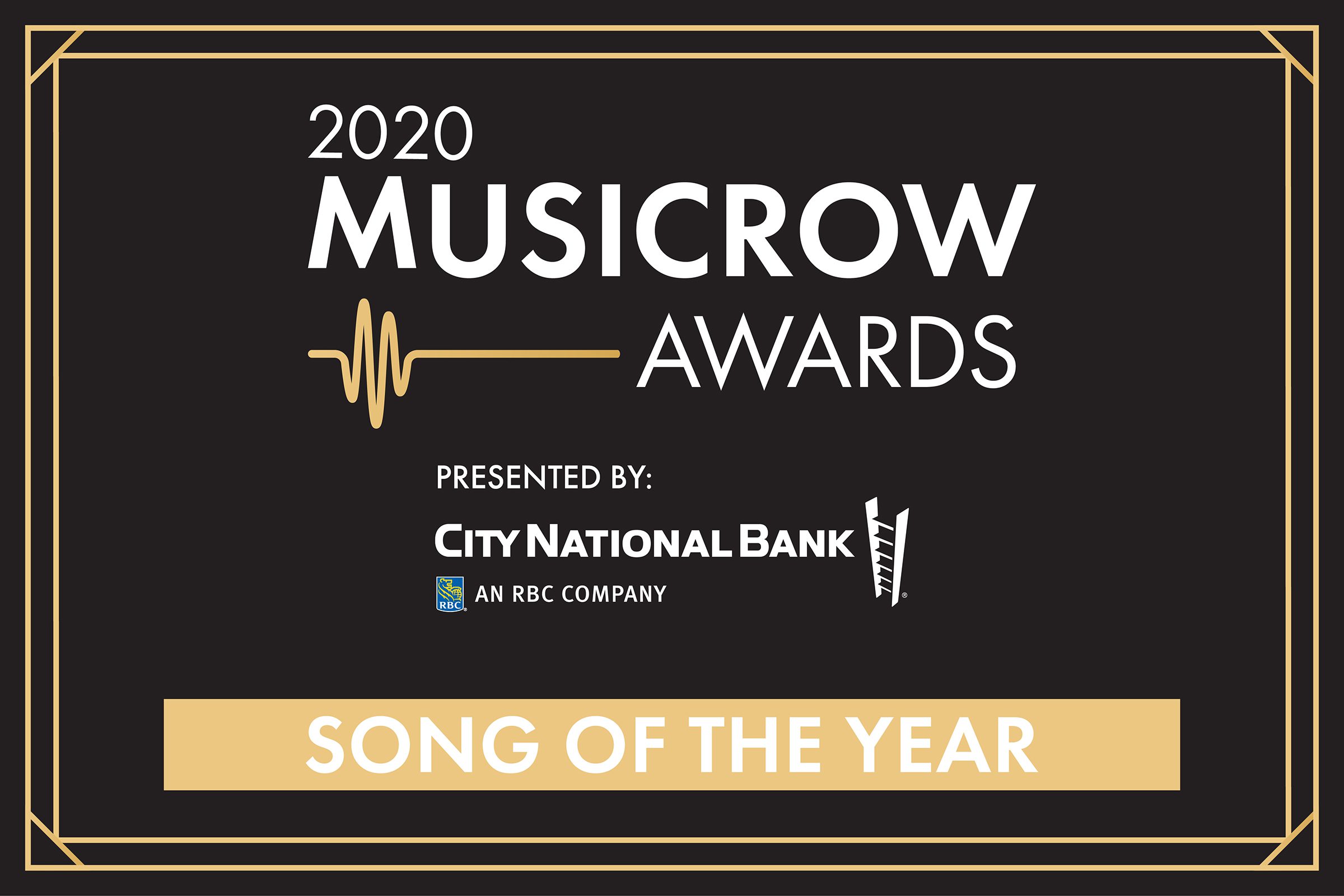 Following the announcement of this year’s nominees for the 32nd annual MusicRow Awards, we take a look at the MusicRow Song of the Year category. Nominees honor Nashville writers and publishers on the craft of songwriting, not necessarily chart performance, during the eligibility period of April 1, 2019 to May 31, 2020.

Winners are determined solely by MusicRow Magazine subscribed members. Voting is now open and closes on July 17 at 5 p.m.. 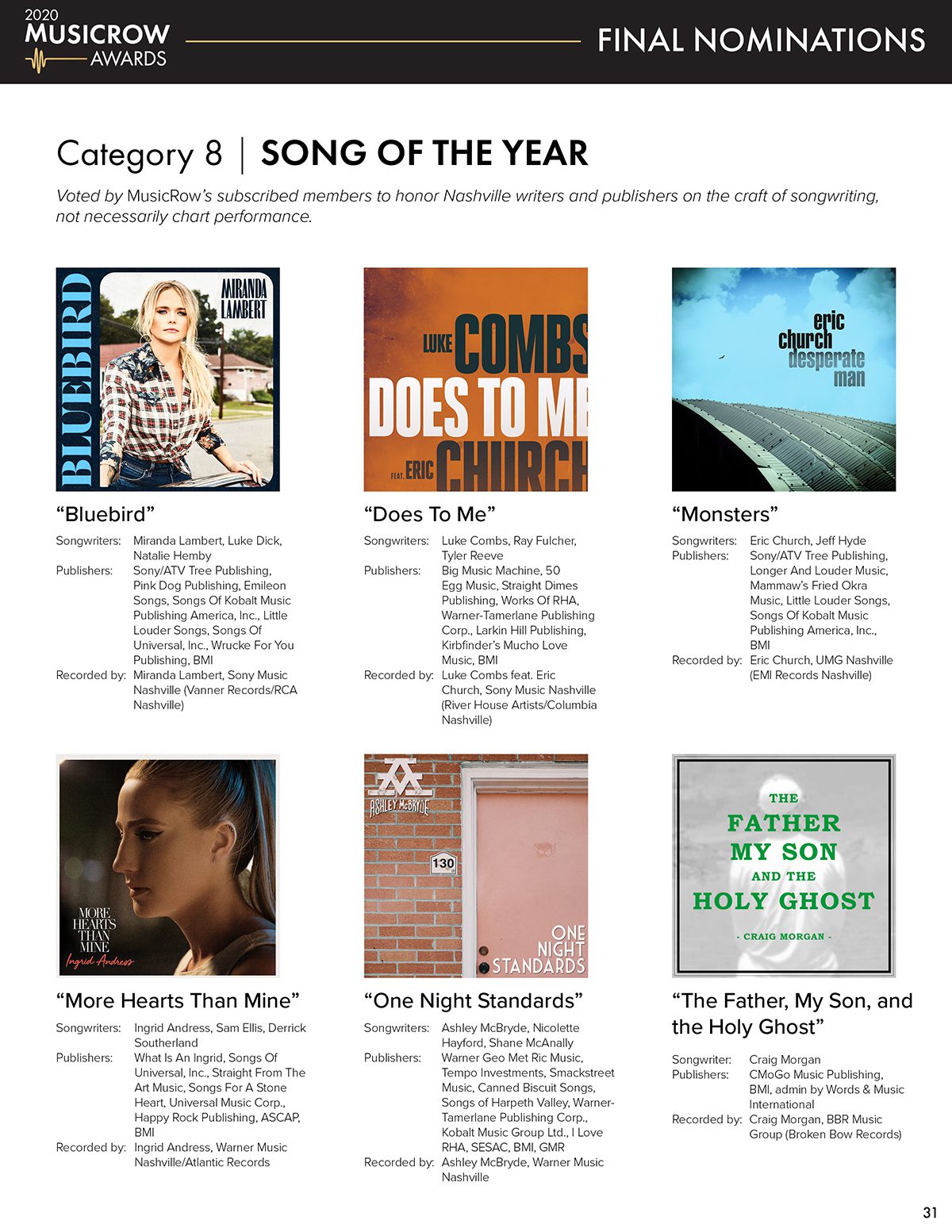 “Bluebird”
Miranda Lambert, Luke Dick and Natalie Hemby co-wrote Lambert’s lovely song “Bluebird,” offering an insightful message about moving forward even when life hands you lemons. (“And if the whole wide world stops singing / And all the stars go dark / I’ll keep the light on in my soul / Keep a bluebird in my heart”). Says the singer, “‘Bluebird’ was a song that had a little darkness to it, but it really was about hope.” It is from her current album Wildcard, recorded by Producer of the Year nominee Jay Joyce. Lambert is nominated for Artist of the Year, and was named MusicRow Critics’ Pick in 2005.

“Does To Me”
Luke Combs scored his eighth-consecutive No. 1 single—a first on Billboard’s Country Airplay chart— with “Does To Me” featuring Eric Church. Combs, who co-wrote the song with Ray Fulcher and Tyler Reeve, describes it this way: “I had a really regular childhood. We always had enough to eat and a roof over our head, but that definitely doesn’t mean that my parents weren’t struggling for money. They just did a really good job of living within their means. And so we kind of used that sentiment to [express what] the world doesn’t think of as really awesome achievements…But they’re still things that you should be proud of.” The track was produced by Producer of the Year nominee Scott Moffatt, and helped Combs earn a nomination for Artist of the Year.

“Monsters”
Eric Church and co-writer Jeff Hyde stand up to metaphorical monsters in the thought provoking song “Monsters.” Sings Church: “Anymore when a restless feelin’ keeps me up at night / Fallin’ on my knees is my new turnin’ on the light / I keep my faith intact, make sure my prayers are said / ’Cause I’ve learned that the monsters ain’t the ones beneath the bed.” The track is from Church’s sixth album, Desperate Man, which was helmed by Producer of the Year nominee Jay Joyce. Church is also the featured guest on Luke Combs’ hit “Does To Me,” which is a fellow contender for Song of the Year.

“More Hearts Than Mine”
Ingrid Andress, Derrick Southerland and Sam Ellis composed a modern classic about a family embracing their daughter’s new relationship with “More Hearts Than Mine.” Says Andress, “This is extra special because it’s a song about my family, who I love so much and who have been my No. 1 fans from the beginning. I’m beyond happy it has resonated with so many people, because that’s the whole beauty of country music; real stories that are told about real people living in this country.” Andress co-wrote and co-produced her entire debut album, Lady Like, and is also nominated for Breakthrough Artist-Writer and Breakthrough Artist.

“One Night Standards”
Ashley McBryde, Nicolette Hayford and Shane McAnally expertly crafted a traditional country song of escaping loneliness with “One Night Standards.” The lead single from McBryde’s current album, Never Will, is full of somber desperation paired with clever lyrics (“I ain’t Cinderella but who is?/Call me what you want if the shoe fits”). The recording was produced by Producer of the Year nominee Jay Joyce. McBryde is the reigning MusicRow Breakthrough Artist of the Year and Song of the Year winner for “Girl Goin’ Nowhere.”

“The Father, My Son, and the Holy Ghost”
Written and produced solely by Craig Morgan, “The Father, My Son, and the Holy Ghost,” is this year’s only solo-written Song of the Year nominee. The intimate and emotional song explores the grief, faith and hope Morgan experienced following the unexpected passing of his son Jerry. “As difficult as this song was to write and as difficult as it is to sing, it gives me strength in my faith in God,” says Morgan. “My hope is it does the same for others.” The song was his first piece of new music in over three years, which he initially self-released before reuniting with Broken Bow Records, his former record label home.