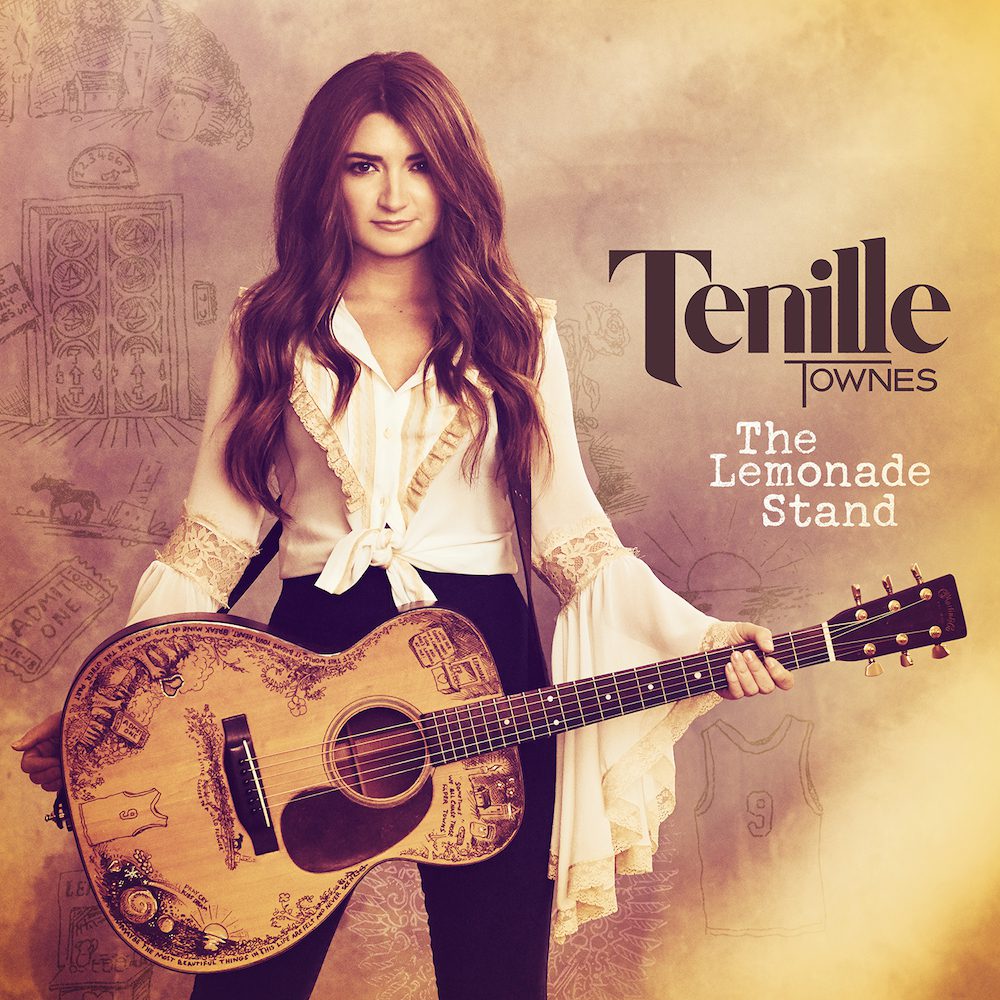 As Tenille Townes releases her first major label full-length project, The Lemonade Stand on Friday (June 26), this 26-year-old Columbia Nashville (in partnership with RCA Records) artist will be doing some very sweet celebrating.

“My family, we do have an ice cream tradition. We’re going to have to do ice cream on Friday, probably over FaceTime—maybe vanilla, maybe cookies and cream—It’s good to celebrate the victories along the way. We used to do that at home, too, so now we just have ice cream through the distance,” Townes wells MusicRow.

The album release follows the success of “Somebody’s Daughter,” which reached the Top 30 on the Country Airplay chart, and marked her first of two No. 1s on the Canadian country radio chart. For the album’s title, Townes plucked lyrics from the song, which imagines what life must have been like for a girl Townes spotted standing on street corner, holding a cardboard sign.

Yes, the image of a child’s lemonade stand conjures nostalgic images of neighbors dropping by and chatting, but also it also represents youthful ambition and tenacity.

Like that budding entrepreneur, building up success one nickel or quarter at a time, Townes has been steadily winning over fan after fan since she first began singing in her hometown of Grand Prairie, Alberta at the age of five. By 14, she had taken up guitar and writing songs. By the time she was in her late teens, when her schoolmates were choosing colleges, Townes was mapping out her own months-long tours, wrangling sponsors and booking concerts at schools, where she simultaneously built a following and used the tour encourage students to chase their own dreams.

Upon arriving in Nashville in 2013, Townes sought out the famed songwriter haunt Bluebird Café, where she watched Lori McKenna (known for stirring hits such as Tim McGraw’s “Humble & Kind” and Little Big Town’s “Girl Crush”) perform in a writers round. “I just hung around after her writers round and was like, ‘Can I have my picture with you?’” Townes recalls with a laugh. “I love her so much and just feel so inspired by her writing, the way she communicates through her style of playing.”

Only a handful of years later, Townes earned a publishing deal with Big Yellow Dog Music, followed by her record deal with Columbia Nashville. She now counts McKenna among her co-writers.
Like McKenna, Townes shines brightly on her debut when she marries her keen eye for detail with complex storylines, such as “Jersey On The Wall (I’m Just Asking),” a clear-eyed glimpse into how loss of a loved one can challenge spiritual beliefs.

As she did with building those early tours, Townes’ approach to The Lemonade Stand was a step-by-step process. Music lovers first heard tracks from The Lemonade Stand in 2018, such as “Where You Are,” “Somebody’s Daughter,” and “White Horse,” in acoustic form via Townes’ four-track project The Living Room Worktapes.

The collection expanded with the EP The Road To the Lemonade Stand, a six-track effort that also included a cover of Sarah Buxton’s “Stupid Boy,” which Keith Urban later turned into a radio hit in 2006.

“Those were the songs that spoke the loudest, message-wise and the acoustic feeling worked well on The Living Room Worktapes. Then we just kept turning corners along the way, wanting to introduce a bit of a different side with ‘I Kept The Roses,’ and then the energy of ‘Holding Out For The One.’”

This full-fledged album is the fulfillment of two items on Townes’ bucket list—releasing her own full-length album, and working with producer Jay Joyce, known for his work with Miranda Lambert (who is signed to the same management company as Townes, Shopkeeper Management), as well as Eric Church and Patty Griffin. Townes poured her heart and melodies out inside the walls of Joyce’s church-turned-studio in east Nashville.

“In a lot of ways I really felt like he put like a leather jacket on these songs,” she says, “just this element of edge that these songs get wrapped in.”

“His albums—all those Eric Church albums and Patty Griffin’s Flaming Red—just set the absolute bar, production-wise, for music. Meeting him and playing some of these songs on guitar and hearing the way he started speaking to the vision of how he would make this record just felt so very right to me.”

Whether the ambiance in her songs welcomes in elements of carefree pop, country-leaning strings or unembellished acoustic guitar, Townes sketches truth throughout every song, such as “I Kept The Roses.”

“I had this idea for ‘I Kept The Roses’ in my phone for a while and I really do keep the roses for events and things. I love the way a dried flower represents something that happened, a moment in time. I think in going through the not-so-fun things that we go through, being able to smile at the parts that were good and the parts that shaped us for the better, is so important.”

She’s at her most hopeful and vulnerable on “When I Meet My Maker,” which Townes penned solo, inspired by her late great-grandmother.

“She was an anchor for our family. This song brought a lot of healing through the writing process, when I was just imagining where she is now. The day I recorded this song, Jay had moved the area where I would normally be recording in to the altar of the church and I was wearing her earrings when I recorded the song, so I just very much felt her with me. Then we sat in a semi-circle, and we just played it to see what happened, and we felt like we captured something really special on that first try. On the record, it’s just the run-through, in its vulnerable and untouched state.”

Alongside her musical ambitions, Townes set herself apart from the beginning with an equal passion for serving those around her. She counts her family, including her great-grandmother—who had been a foster parent—as an inspiration.

“I grew up watching that from both my parents and from my grandparents and it’s just how our community is wired in a lot of ways,” she recalls. “We did lots of little fundraisers for families struggling through different things, or some of our family’s friends that had a house fire and people just showed up in an incredible way, or different friends going through cancer and everyone would take turns making meals for them.”

At age 15, Townes launched Big Hearts for Big Kids, an organization dedicated to helping teens struggling with homelessness. She was moved to action after seeing a pamphlet about kids in her hometown who were struggling with family issues, addiction, and homelessness. “It blew me the away that the statistics of how many kids in my small town were needing that kind of love and guidance.”

The initiative has earned nearly $2 million to date. Last year, Townes partnered with the Girl Scouts of Middle Tennessee Troop 6000 to record a new version of “Somebody’s Daughter.” “It was just one of the coolest things I’ve ever been a part of, getting to witness their courage and hear their voices.”

It’s fitting then, that the voice of a child closes out The Lemonade Stand.

On album’s piano-laced, poetic closing track, “The Most Beautiful Things,” the song concludes with the voice of 7-year-old Amelia, the daughter of album engineer Jason Hall.

“That was one of my favorite moments of being in the studio ever, just witnessing her standing in that vocal booth with those big headphones, just singing her heart out,” Townes says. “Jay had this idea to just bring in a little kid’s voice at the end of that song and it meant a lot to have her voice as sort of the thematic ending to this piece of music. It felt so full-circle, just remembering the 7-year-old kid that I used to be, listening to my favorite records and singing along to them at the top of my lungs in the back seat of the car, dreaming of getting to do music some day and make a record like this, and this record very much is that dream.”