Noted as a key figure in the Bakersfield, California scene of the 1950s-1970s, Owen co-founded the city’s first recording studio, performed in key bands as a steel guitarist, co-owned Tally Records, managed Merle Haggard for decades and helped to launch Buck Owens, Ferlin Husky, Jean Shepard and Bonnie Owens, as well as Haggard.

Owen was born in Conway, Arkansas in 1929. He migrated to Bakersfield at age 20. He picked cotton by day and played steel guitar in the house band at The Blackboard nightclub by night. The guitarist in the group was his cousin, Lewis Talley.

In 1952, Owen and Bonnie Owens recorded “A Dear John Letter.” Their small-label record failed, but Owen and Talley bought the rights to the song. This paid off when Ferlin Husky & Jean Shepard re-recorded it with backing by Owen, Talley, Bill Woods and Tommy Collins for Capitol Records. It became a No. 1 smash in 1953, the first Bakersfield hit.

Talley and Owen co-founded Tally Records in 1955 and built Bakersfield’s first recording studio shortly thereafter. Among the studio’s first customers was Buck Owens. He recorded the rockabilly tune “Hot Dog” and released it as “Corky Jones.” In 1956, the cousins recorded another rockabilly tune titled “Kathleen” by Wally Lewis, which became a minor hit.

As a steel guitarist, Owen was a regular on the influential Bakersfield country TV series Trading Post. As a songwriter, Owen scored a No. 1 hit with Ray Price’s version of “The Same Old Me” in 1959.

By 1961, Owen was performing at another notable Bakersfield nightclub, The Lucky Spot. Merle Haggard, then newly released from San Quentin Prison, joined the band as a guitarist. Owen signed Haggard to Tally Records. 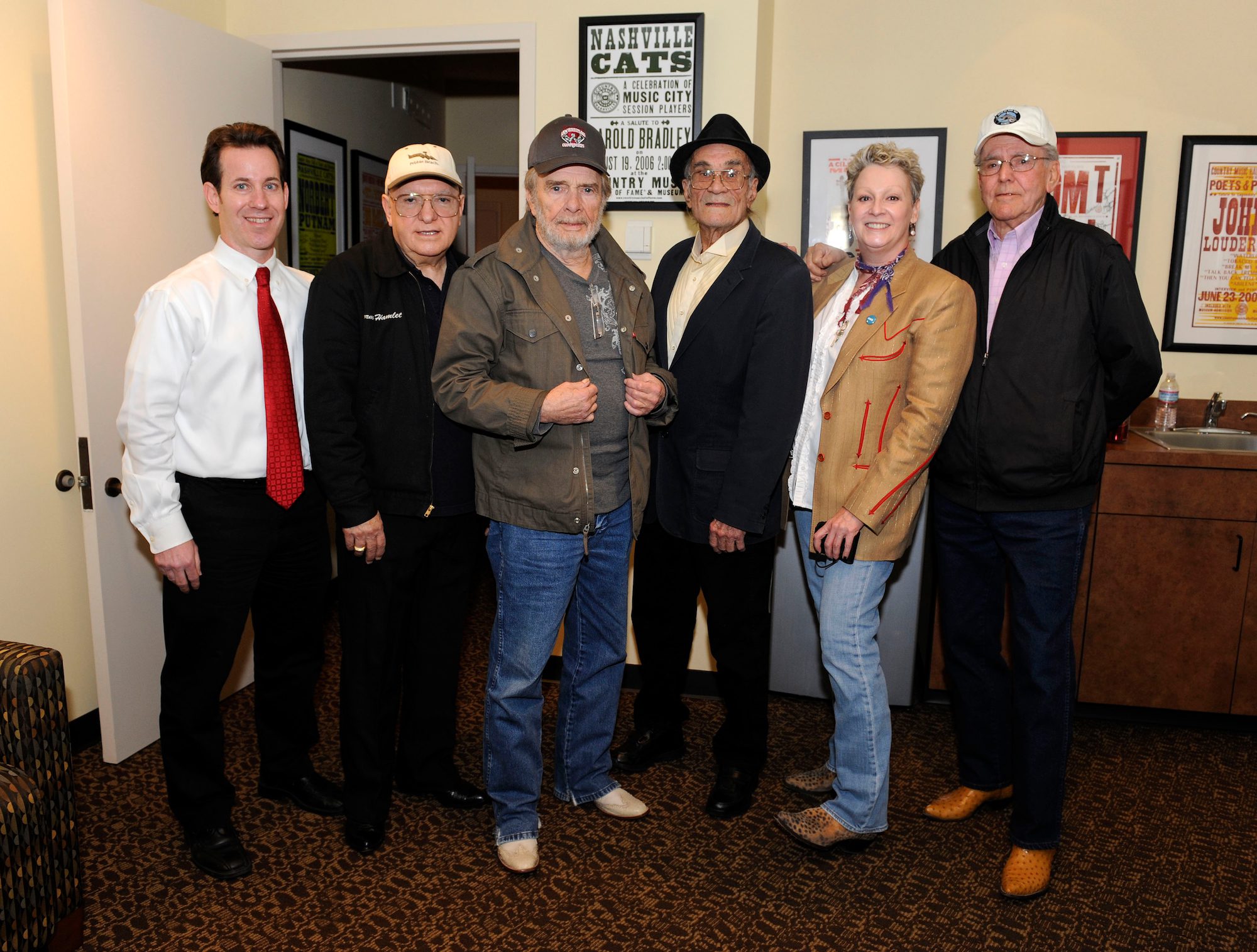 Merle Haggard made a surprise appearance at the Country Music Hall of Fame® and Museum’s public interview program My Friends Are Gonna Be Strangers on Wednesday, April 11, 2012. He was joined on stage by Norm Hamlet and Don Markham, longtime members of Haggard’s band, the Strangers. The men began the discussion by paying tribute to Fuzzy Owen, the man who gave Haggard his first recording contract, produced and played steel on his early records, and has managed his career for decades. The program was presented in support of the major exhibition The Bakersfield Sound: Buck Owens, Merle Haggard and California Country. Pictured (L-R): Museum Editor and Co-Curator Michael Gray, Norm Hamlet, Merle Haggard, Don Markham, Vice President of Museum Services Carolyn Tate and Fuzzy Owen. Photo: Donn Jones

“Sing a Sad Song” became Haggard’s first charted single in 1963. He followed it with the Tally Records follow-ups “Sam Hill” and “(All My Friends Are Gonna Be) Strangers.”

Also on Tally was “Just Between the Two of Us,” a duet by Haggard and Bonnie Owens. Formerly the wife of Buck Owens, she married Haggard and became the longtime background vocalist in his band The Strangers.

Another Tally Records alumnus was Bobby Austin, who issued his song “Apartment No. 9” on the label in 1966. Owen was listed as Austin’s co-writer on the song, as was Johnny Paycheck. It became a career-launching hit for Tammy Wynette in early 1967.