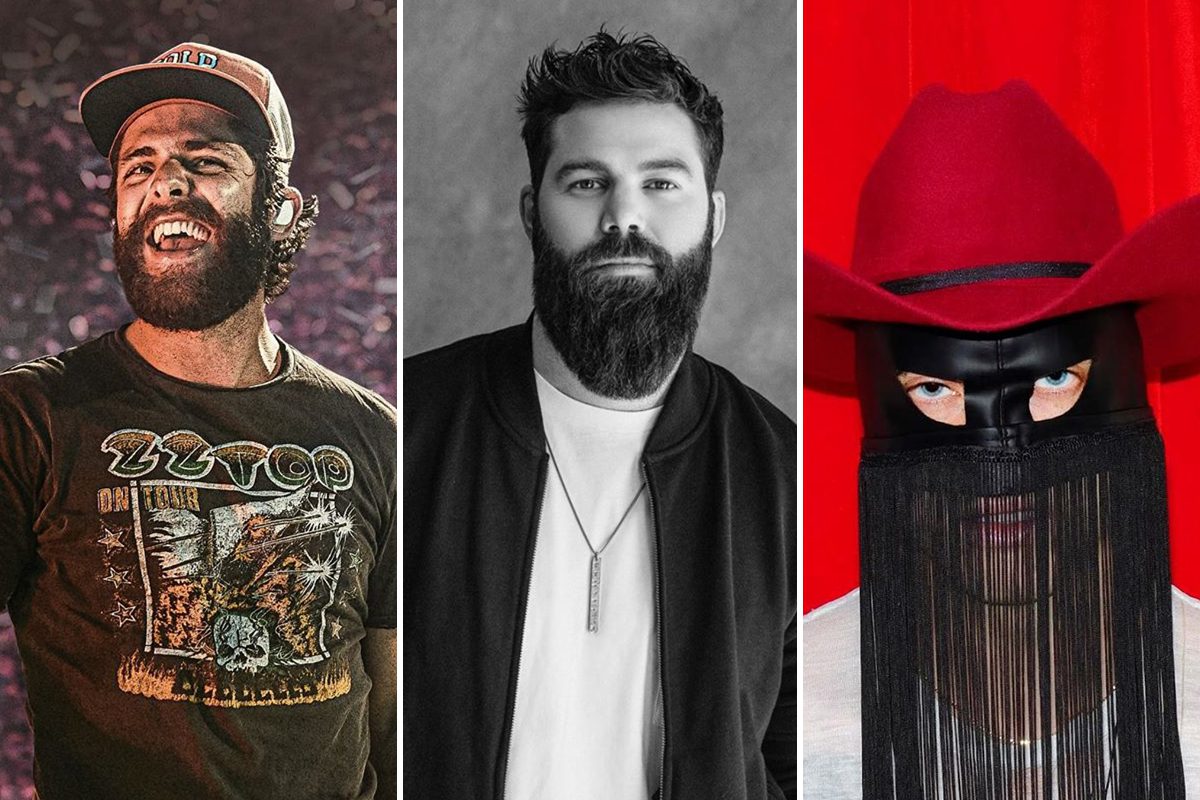 Maybe it’s the dreadful time we’re living in or maybe it’s a coincidence, but lots of guys in this listening session are gazing inward and slowing things down. Whatever the cause, there’s some terrifically moving stuff here.

Our duos Florida Georgia Line and Big & Rich are rocking, but the listening session was dominated by the slowies offered by Kenny Rogers, Kane Brown & John Legend, Jordan Davis, Kip Moore and Thomas Rhett. I’m calling this a photo finish for Disc of the Day between the bearded men, Thomas Rhett and Jordan Davis.

If you haven’t already been hip to Orville Peck, now is your chance to catch up with this left-field wonder. He’s our DisCovery Award winner.

ORVILLE PECK/Summertime
Writer: Orville Peck; Producer: Orville Peck; Publisher: none listed; Columbia
– Deep, deep twang and big, big drama infuse this slow, echoey ballad. His throaty vocal hails from the jumpsuit-Elvis era, which catches your ear right away. This theatrical masked man is kind of a country “performance artist.” Different and oddball, maybe. But heaven knows we can use a little “different” in this hidebound genre.

FLORIDA GEORGIA LINE/I Love My Country
Writers:Corey Crowder/Ernest Keith Smith/Ryan Vojtesak; Producers: Corey Crowder/Tyler Hubbard/Brian Kelley; Publisher: none listed; BMLG
-This rompin’ stomper is the feel-good anthem for the warm days to come. At a time when everybody else seems intent on sounding like a pop act, this loud-and-proud ditty is country to the core.

THOMAS RHETT/Be A Light
Writer: Thomas Rhett/Josh Miller/Josh Thompson/Matt Dragstrem; Producer: none listed; Publisher: none listed; BMLG
-I choked up and my eyes brimmed with tears because of the powerfully beautiful message here. In a world of madness, this is, indeed, a shining light. Rhett’s guests on this include Reba, Keith Urban, Chris Tomlin and Hillary Scott. Proceeds benefit MusicCares.

KENNY ROGERS/Goodbye
Writer: Lionel Richie; Producer: Tony Brown; Publisher: none listed; Capitol Nashville
– It was written as a break-up song, but in light of Kenny’s passing it takes on an extraordinary poignancy. It’s pretty dang hard not to be touched by this ballad. I still think Kenny is one of the great voices. Framed by strings and piano, he shines as brightly as ever on this swan song. Farewell, Kenny. I’m grateful for the music you left us.

JORDAN DAVIS/Detours
Writers: David Turnbull/Jacob Davis/Jordan Davis; Publishers: Anthem Entertainment; Producer: none listed; MCA Nashville
-Very cool and super expressive. He’s thoughtful, meditative and reflective as he takes us through the wrong turns of life that led him to goodness. I was with him on every note. This deserves to be a smash.

KANE BROWN & JOHN LEGEND/Last Time I Say Sorry
Writers: Kane Brown/John Legend/Matt McGinn/Andrew Goldstein; Producer: Andrew Goldstein; Publisher: none listed; RCA
– We’ve all been here. How many times have we hurt the one we love and then felt a regret so deep that it’s in your bones? Legend’s piano anchors the arrangement and both voices soar mightily. Well done, you two.