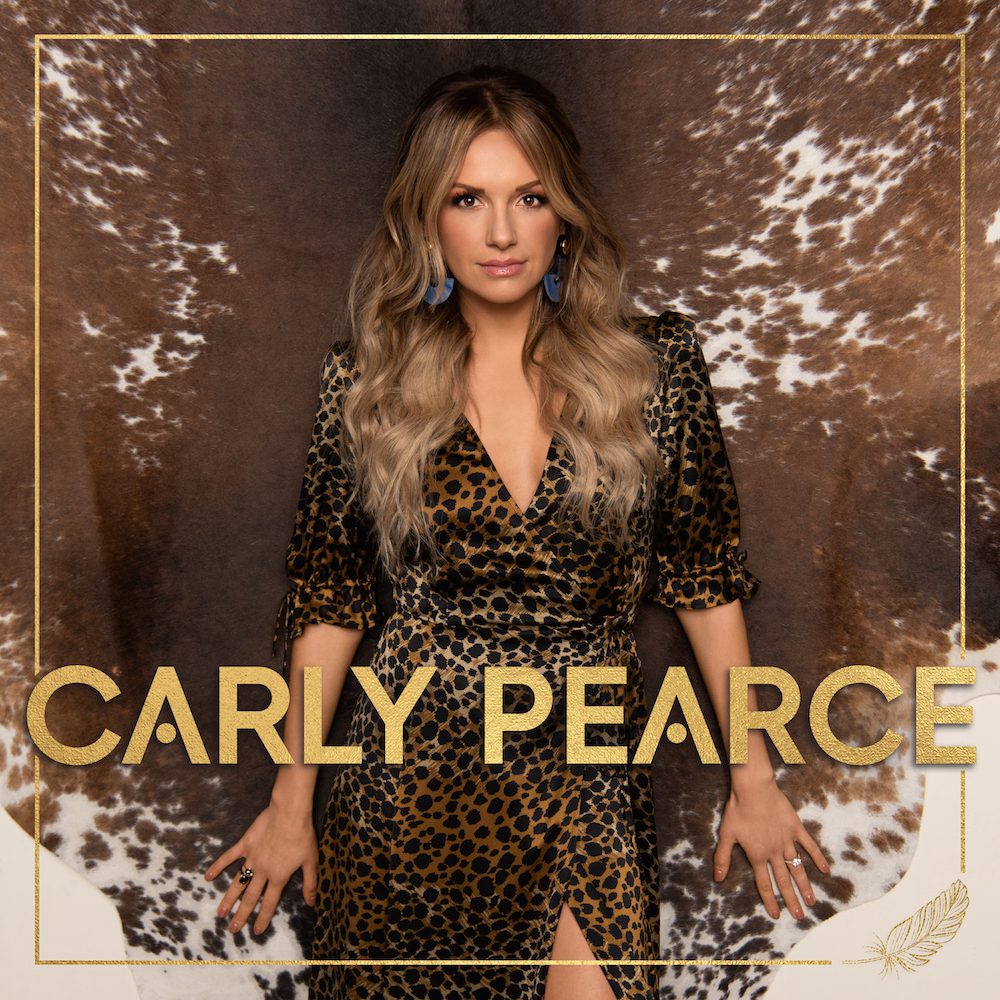 “The theme of the whole thing for me was just to be raw and real,” Carly Pearce says of her newly-released, self-titled album.

“Raw and real” music has become something of a calling card for Pearce, who released her debut album Every Little Thing in 2017 and celebrated a No. 1 country radio hit with the album’s title track (the song has also been certified Platinum). “Every Little Thing” delved into the sorrowful undertow of a broken relationship, letting listeners in on the emotional torture that comes with reliving the ups and downs of a relationship that ultimately unravels.

Now, more than two years after the release of her debut album, Pearce’s self-titled sophomore album for Big Machine Records, which released Feb. 14, opens up about the changes that have occurred since album one. Pearce has seen her career shift into high gear, opening tours for Luke Bryan and Blake Shelton, among others. That Valentine’s Day release date is appropriate, given that much of the album centers on love, both Pearce’s commitment to country music, and her own romantic journey with fellow artist Michael Ray, whom she wed in October.

One track on the album, “Heart’s Going Out Of Its Mind,” stems from the early days of their relationship. Three days after the couple first began getting to know each another, Pearce had a writing session set with Laura Veltz and Joe Ginsberg.

“I just went to the writing session and told them, ‘I feel crazy. I don’t know what’s happening to me, but I think I’m going to marry Michael.’ And they were like, ‘What? Huh?’ Because I’m so not the typical artist that would ever date another artist. And we wrote it and it will forever be that moment that I remember, this was the first emotion I had about him and that’s fun.”

That breezy, loving feeling continues as Pearce and her husband share their first officially recorded duet together on the new project, with “Finish Your Sentences,” a track penned by Kelsea Ballerini, Thomas Rhett, Jesse Frasure, and Ashley Gorley.

“I didn’t want it to be too heavy. Because we… yes, we did get married during this process, but my album was done when we got married. I just wanted it to really embody the feelings of meeting, dating, falling in love. And that song, first of all I was, ‘Why didn’t I think of this?’ And we really do finish each other’s sentences. It’s not a normal duet. I already have a normal duet on my record. This one was so unique and so fun and it really did snapshot how we first started dating and how we felt.”

Pearce says two earlier co-writes, “Halfway Home” and “I Hope You’re Happy Now,” set the tone for the album. “Halfway Home” serves as almost a transitional piece, spotlighting an intensely vulnerable moment between her debut album fueled by heartbreak, to her new offering that revels in carefree, devoted love.

“It was the song that I wrote to apologize to the person that I’m talking about in ‘I Hope You’re Happy Now,’” she says, noting the two tracks were penned within weeks of each other. “But, I think it’s just the most raw and blunt I’ve ever been in a writer room. I take full ownership of it, and that one is the most vulnerable on the album. It’s still difficult. I don’t really like to listen to it around people, which I’m going to have to get over that. I’ve never sung it live yet.

“I think that writing those two songs really inspired me to…I had to decide if I was going to go there and tell people about that particular relationship. Once I did, I was like, ‘All right, that’s the bar for me for this record.’ Then I could start to fill everything in. I work best when I have a couple of songs on an album and then I can fill in the holes, almost like a puzzle.”

Pearce’s voice simmers over ‘90s-country music soaked grooves on “I Hope Your Happy Now,” sounding warm and soothing juxtaposed with Lee Brice’s gravelly tenor on her current Top 15 collaboration. “I Hope Your Happy Now” was filled with starpower, both in the recording booth and the writing room. Pearce co-wrote the track with country radio juggernaut Luke Combs, Randy Montana and Jonathan Singleton.

“I had asked him to write with me when he had ‘Hurricane’ out, before he was really popping off. Luke had the title and started playing the groove and I had the idea for the entire first verse—right up to the chorus—it all just came out of my mouth. I knew exactly what I wanted to write. That’s the first time that has ever happened to me. We didn’t change any of it.”

Initially, Pearce had thought of having Combs sing the part, but says having Combs sing on the track would have required that she wait to release the song, as he was putting out an album of his own around the same time. “Honestly, I just didn’t want to wait, because I knew this song was what I wanted to come with first. So I was like, ‘Whose voice do I love as much as Luke’s voice?’ Lee Brice. Luckily, Lee had the same excitement about it that I did.

“It felt different for a girl to ask a guy to be a guest on her song. You see a lot of male artists ask women to be on their tracks. But I felt powerful to be able to call, to say, ‘I love this song. Do you want to be a part of it?'”

The fresh, retro vibe throughout the album is no accident, but a surefooted building upon her previous work, bringing in flirty, confident anthems (“You Kissed Me First”) and being transparent about the road she has taken, both professionally and personally (“Dashboard Jesus”), all while staying rooted in the country sounds that she grew up on.

“Other females in country are exploring pop sounds and I have no desire to do that. I really wanted to be the one that bled country.”

Though there is no mistaking her intentions Pearce is staking her claim as a country artist with the new album, she’s got plenty of radio-friendly bangers on the project, such as “Woman Down,” from Shane McAnally, Jimmy Robbins, and Veltz.

Pearce finds all sorts of ways to pay homage to those she loves on the project, who have helped shape her as a person, as a performer, as a creative. The feather in her logo is a tribute to her grandparents, while “It Won’t Always Be Like This,” which Pearce wrote with Natalie Hemby and Sam Ellis, was inspired by her family. Pearce also uses the song to give advice to her younger self, that her childhood dreams would come true.

I had big wings but didn’t have a sky/just a front-row view of everybody flying high/waiting for my time/wish I could’ve told myself back then/it won’t always be like this, Pearce sings on the track.

“Natalie and I bonded over our grandfathers, and I just love her as a person. She had that title and I don’t know how to explain it, but we both cried the whole time and we have similar stories of trying to make things happen. She worked as a telemarketer, I cleaned AirBnBs. We watched so many other people get things that we didn’t get. That’s the only session I ever cried during,” she says quietly. “God, I wish I could just go back and tell that 22-year-old, ‘Live your life and don’t put so much weight on things that happen in this town. It’s going to happen and it’s going to be fine. You’re going to be okay.’ And then so many guys that I cried over, like, ‘Oh my gosh, this is the end of my world.’ Little did I know it was preparing me for something so much greater.”

Carly Pearce is the singer-songwriter’s eponymous album, but it is also the final full album that bears the name of her late producer, busbee, who died in September 2019 following a battle with glioblastoma.

Busbee had begun working with Pearce prior to her signing with Big Machine Records, and helped her craft both her debut album Every Little Thing, and her breakthrough No. 1 single of the same name. He was at the helm of this project prior to his passing.

“He literally built this thing with me,” Pearce says. “He helped me figure out and articulate who I am. He was like family and I talked to him daily. Nobody outworked him, but he was heart-first, and cared about me as a person, and a lot of people in the industry just don’t. They are looking to what they can gain from you, but I just had a trust and a bond with him. He knew the girl that was struggling, trying to figure it out, that still battled confidence and then ‘Every Little Thing’ hit, and she was, ‘Oh my God, what am I supposed to do with this?’ I always called him my ‘ninja,’ because he knew everything and I told him everything. He touched so many people because he just cared.

“I had days where I didn’t want to put [the album] out, just because he was such a big part of this and I felt, ‘Why would I do this without him? What does music mean without him?’ But I do feel this, I have something nobody else has, which is the last project. I also feel lucky that I have so many little ways that I think keep his legacy alive.”

This week, Pearce joins some of Old Dominion’s tour dates in Canada, and will open for them on the U.S. leg of their We Are Old Dominion tour.

“They are known for their songs and they love the art of making music, the same way I do. I feel like it’s a really good pairing for me to have the opportunity to be around people who genuinely love songs.”

Pearce says she’s excited by a new crop of fellow singer-songwriters who are equally as passionate about songwriting as they are by performing.

“Just looking at the climate of country music and where it’s been over the past 10 years and it kind of went through the bro-country stuff and it feels it’s starting to open back up a little bit to have that realness to it.”