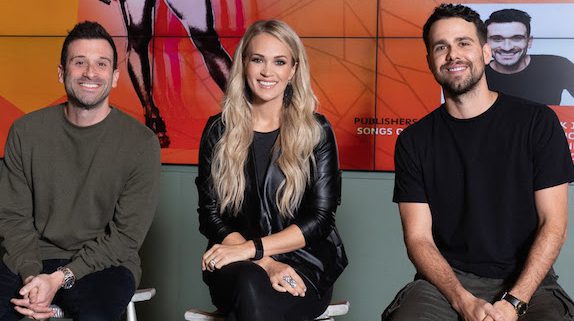 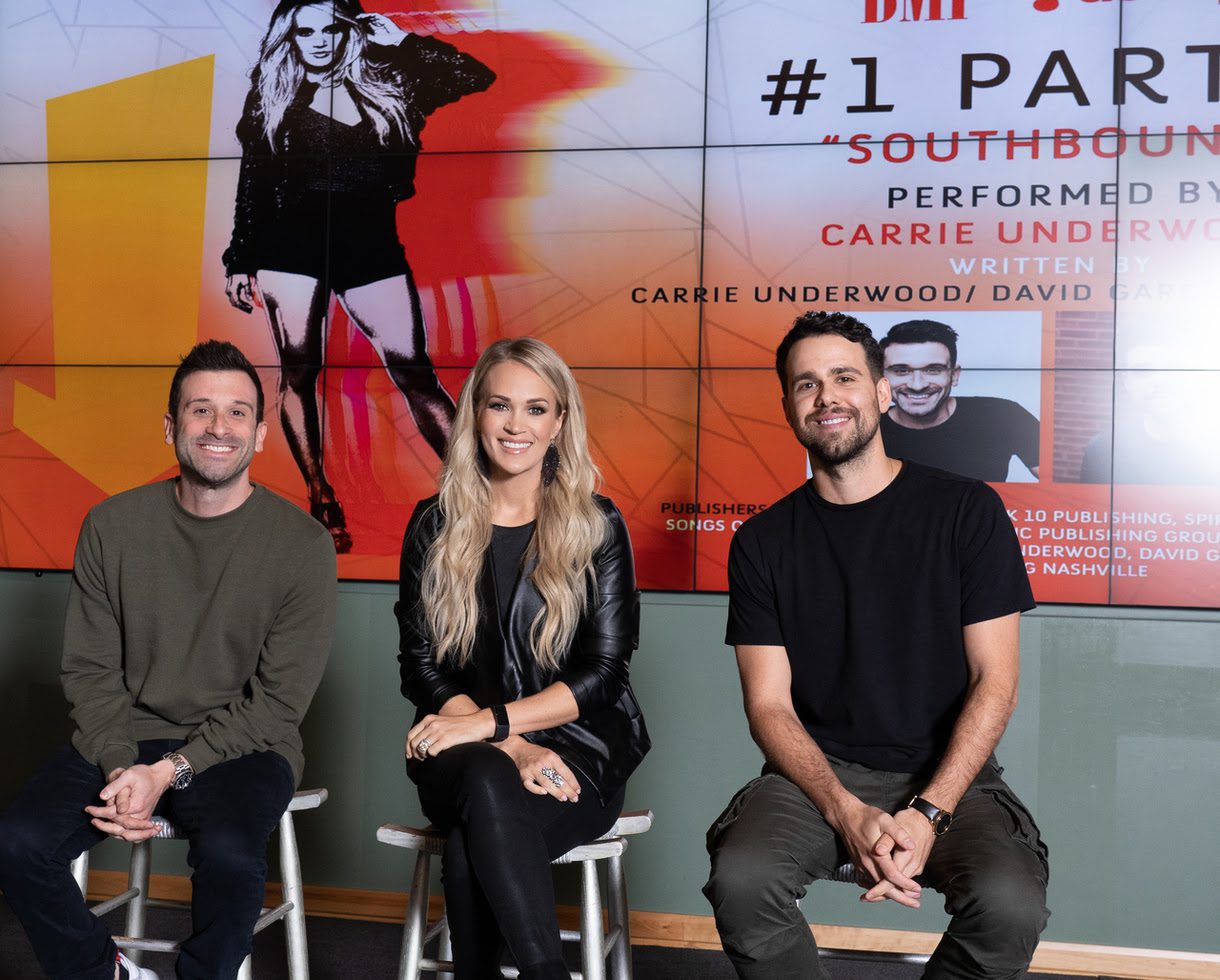 Carrie Underwood was honored for her 27th No. 1 hit, “Southbound,” on Monday (Oct. 21) during a party held at BMI’s Nashville office.

The No. 1 party comes just weeks after Underwood brought her headlining Cry Pretty Tour 360 to Nashville’s Bridgestone Arena for a sold-out show. On Nov. 13, she will host the CMA Awards for the 12th consecutive year, this time alongside Reba McEntire and Dolly Parton. She is nominated for Entertainer of the Year, Album of the Year and Female Vocalist of the Year.

“Carrie, you’re the premier voice of this generation,” UMPG’s Tomlinson said. “You’re the face of country music around the world.” He also thanked the Capitol Nashville team and Underwood’s manager Ann Edelblute. “You get the job done and you do it with grace…you are a rock star.”

BMI’s Williams recalled a recent conversation had with his fellow CMA Board member, songwriter Lori McKenna. “We were talking about artists being in the writing session with more seasoned writers and the mixed results that can come about from that combination. As we talked, Lori’s face just lit up and she said, ‘There are a few exceptions and I’m talking about Carrie Underwood. She’s not a good writer, she’s a great writer, and she can hold her own in writing with anyone.’ That was just an impromptu comment from one of Nashville’s most renowned writers and for her to categorize Carrie in this way is a huge compliment. She knows what she wants to sing about and she knows who she is singing to.”

Spirit Music Group’s Rogers praised both Garcia’s talent and work ethic, saying, “He’s one of the hardest workers. He won the ASCAP Christian Songwriter of the Year award like six weeks ago. He gets his award and we go to dinner and he starts looking at his watch. He goes, ‘I’ve got to go back to the studio because I have a demo vocal at 10 p.m.. The artist is cutting on Friday so this is the only chance we have to get it to them.’ Well, he got the cut,” he said, to the applause of the crowd. “You deserve all the good things that happen to you. We are thrilled at Spirit to be part of your world.”

Rogers also said to Underwood, “Thank you for being a forward-looking artist in our industry…you care about making music that means something to you, and to your fans, and that’s why you are a guiding light in country music.”

“This is the first [No. 1] we get to spend together as part of Universal Music Group, so it is pretty special,” UMG Nashville’s Mabe told Underwood. “The Cry Pretty album is an album of taking creative chances and sharing deeply vulnerable and personal testament….I’m convinced that Carrie’s voice is so powerful because she speaks and has a voice for those who do not, and you can see them come out in droves every night to connect with her in concert, from little girls, to grown men, straight, gay, all ethnicities and ages, and especially women. Perhaps the thing that I have learned from her despite all the pressure as a woman, a wife and working mom, boss and entertainer, cultural influencer, and performer, is that she’s always working to use her platform to shine on others, including creating opportunities for other female artists, exposing new acts and encouraging fans to champion each other.” 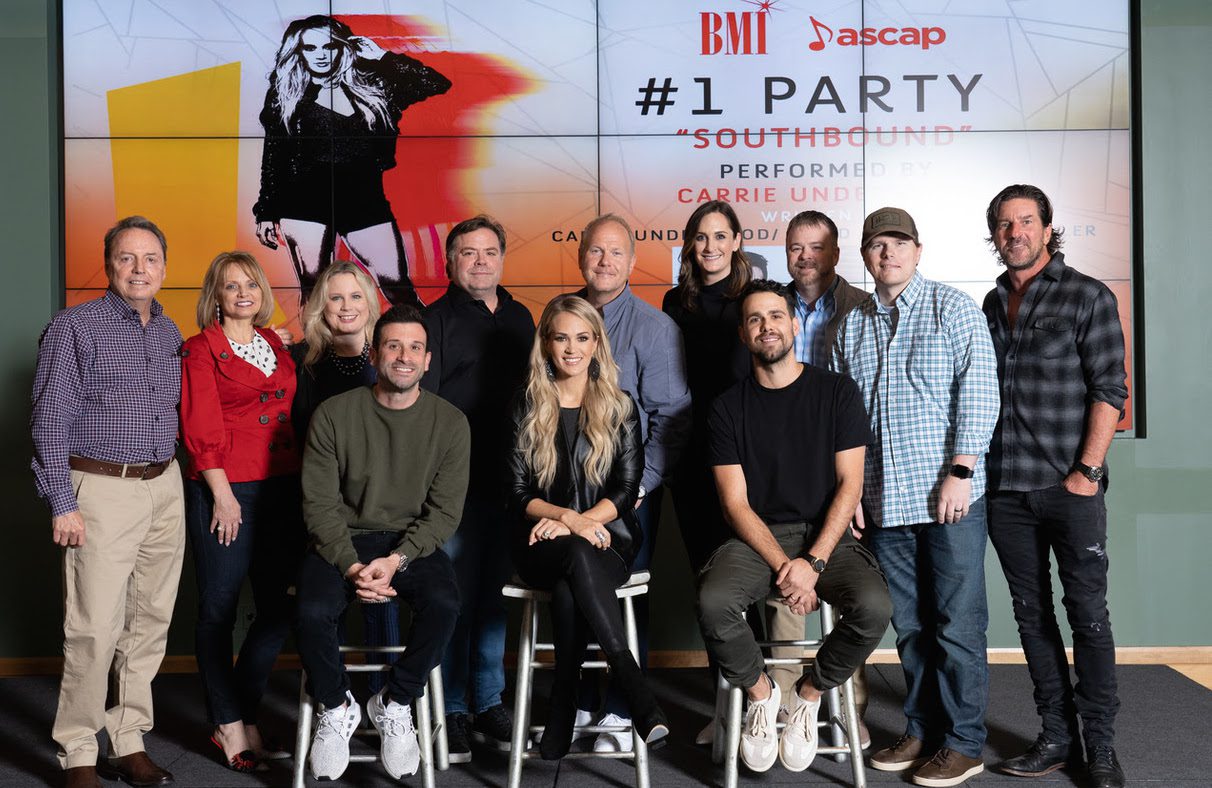 “This is my dream job and it’s icing on the cake to get to celebrate things like this,” Miller said. Of Underwood, he said, “I remember I was a senior in high school and seeing you win American Idol. And to think that I’m up here…you’re a superstar and you are a superstar human. You are an artist and you have a voice and just thank you for doing everything you do, because your artistry is bigger than just shows and music.”

Garcia, who both wrote for and co-produced Underwood’s current album Cry Pretty, moved to Nashville in 2009. He’s earned four Grammy Awards for songs including Mandisa’s “Overcomer” and the album of the same title, as well as songs recorded by TobyMac. Garcia is the reigning ASCAP Christian Songwriter of the Year, and also took home the honor in 2015 and 2016. He also co-wrote Moore’s “More Girls Like You,” and co-wrote three tracks on NF’s album Perception.

Garcia took the time to praise Underwood not only as a songwriter, but as a producer. “When you look on the back of the record and it says ‘co-produced by Carrie Underwood,’ Carrie was in my studio in Berry Hill every session. Every day we had someone come over, she was right there. I’m so proud of this song, but I’m so proud of this record, too. Thank you for making this possible. We had an incredible record label that trusted us. Josh, I couldn’t be more proud of you, dude, just watching you do everything.”

“I’m so proud of this entire album. It is definitely me to the fullest extent,” Underwood said. “To be able to work with David throughout, it was just a blessing. It feels good singing these songs on the road every night. Getting to write with both of these guys, it was wonderful to have such talent in the room and get to know you guys. I’m excited to celebrate ‘Southbound,’ that last piece of the puzzle that we knew we needed. You’ve got to have those light, fun moments in the show and it’s such an honor to get to kick the show off with ‘Southbound.’”

“It never, ever gets old. Every time you reach that No. 1 spot, it’s like you get to celebrate for the first time, every time.” 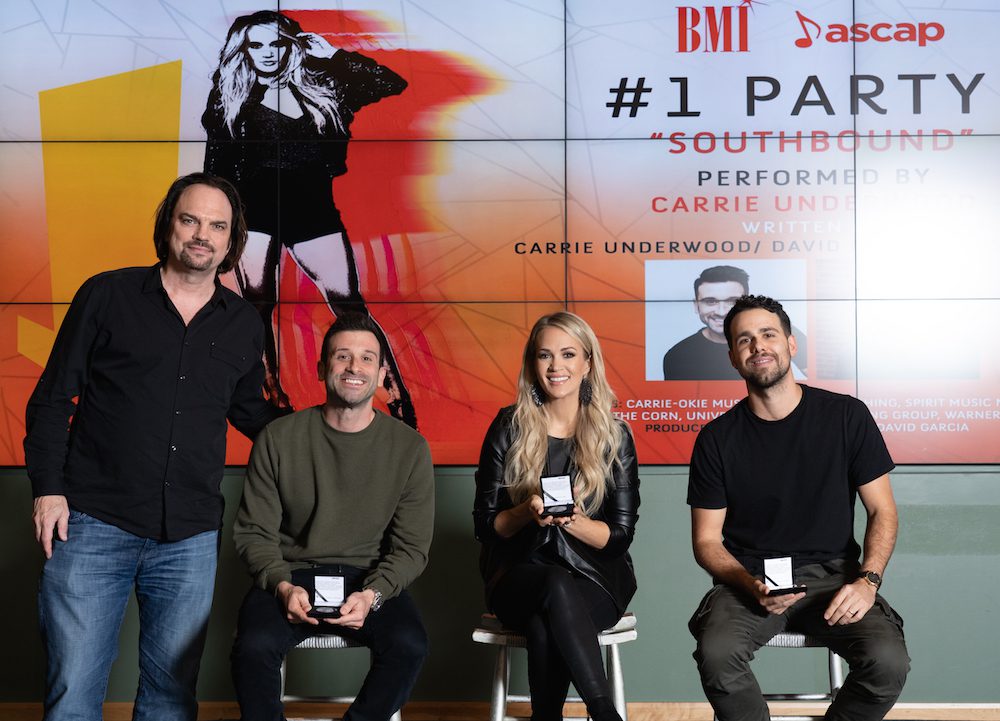 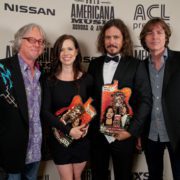