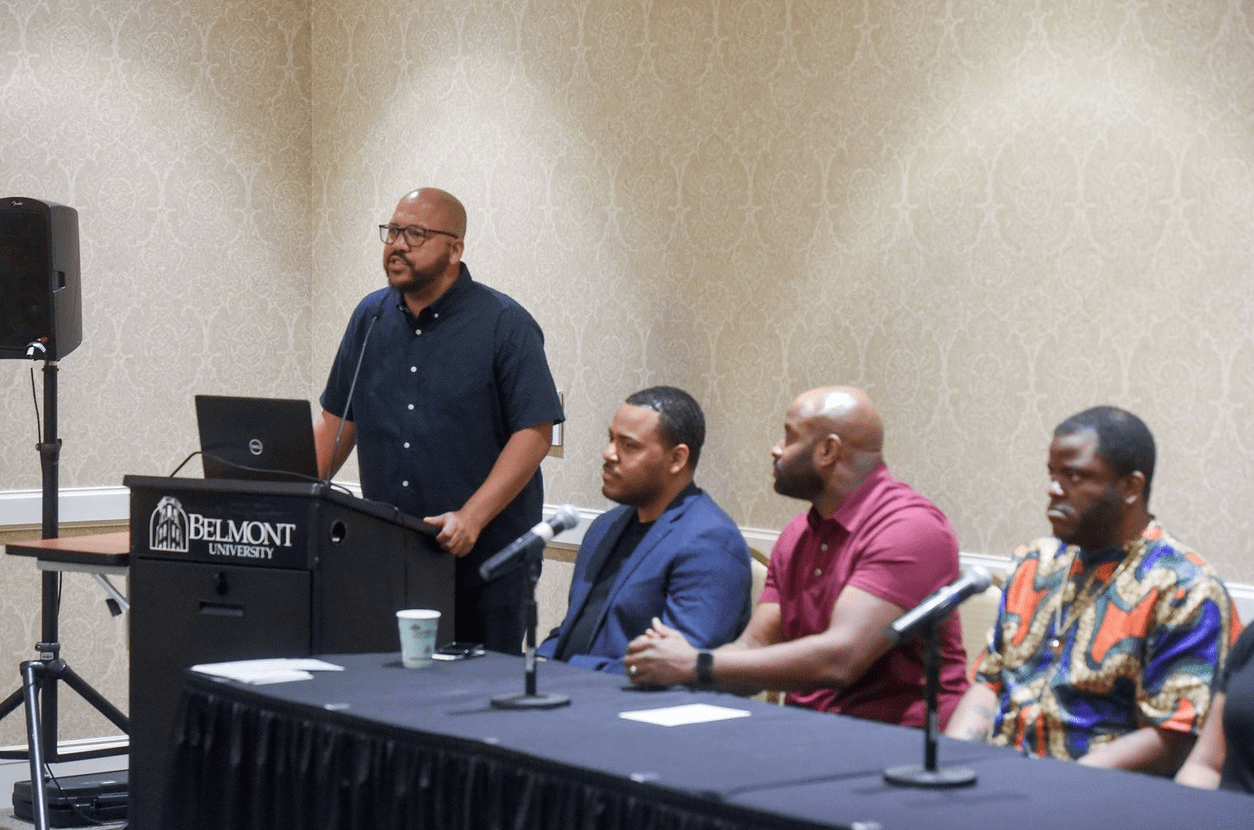 The first of the six panels, titled “The Rise of an Urban Music Scene in Nashville,” was led by Belmont faculty member Dr. Eric Holt and featured panelists including RCA Inspiration’s Sr. VP Phil Thornton, producer/writer Ron Gilmore of Dreamville, D’Llisha Davis of 2L’s On A Cloud, hip-hop artist Tim Gent, and Shannon Sanders, producer/songwriter and programmer for 102.1FM The Ville.

Thornton addressed the issue of the lack of black executives in the entertainment industry, which is still the case even with the reigning popularity of hip-hop and R&B.

“We work in an industry where R&B and hip-hop is the most-streamed genre. Unfortunately, the label and the publishers as far as the top level of leadership, does not reflect that of African Americans. We have Sylvia Rhone at Epic Records, Jon Platt at Warner Chappell and Darcus Beese at Island, but I’m talking about a handful of executives when there are two dozen or more record labels. That to me has to change. But even beyond the CEO level, you get to the SVP, VP level, it’s not reflective of the culture…it’s a responsibility for executives like myself to put my money where my mouth is…I can talk about it, but am I being part of the solution to usher in the next wave of executives? For me personally and my friends, we are but we need more of us to usher in more diversity…that’s to me the most impactful way to do great business on a record company level. It can’t be just all people who don’t represent the culture, and let me be clear, just because you are not African American or Hispanic, it doesn’t mean you can promote, I’m not saying that, But I am saying diversity is key and it helps to have people who understand the culture and the nuances to be in these boardrooms.

“I’ve noticed even in the organization I currently work for, it’s me and one woman…the rest is older white men. We bring a different perspective and a different point of view. We talk about hip-hop in the meetings, we talked about country when Lil Nas X when it first came out, nobody in the room got it, they were like, ‘How did this happen?’ We were like, ‘This is a no-brainer.’ We have the responsibility as executives to bring in the next wave and give more internships and entry-level positions and open it up. The digital landscape has made it easier to work with producers and so forth.”

According to Gilmore, who has produced for J. Cole and owns his own label, Dreamville, he realized that growing up in Nashville, and attending Nashville School of the Arts, prepared him well to be a musician, when he left for New York in 2010.

“Nashville overly prepared me for what I was about to do. That’s why I’m coming back [to Nashville]. I could read music, I could compose, I’m a really good player and that comes from being around amazing musicians in Nashville all my life,” he said.

Sanders, who has worked with India Arie, added, “I’ve known about Ron forever and all the people he came up with. He’s right. There are two things here, the music and then the music business. We’ve been prepared musically. But what’s new and emerging is urban music business in the city.”

Several of the panelists spoke of the lack of music business infrastructure for Nashville’s urban music community, as well as the growth of promotion for urban music that they have seen in the past few years in Music City. Sanders launched radio station 102.1 FM The Ville as a way to promote the work of local urban music artists in Nashville.

“I was in Leadership Music, Class of 2017, one of my classmates [Cromwell Group’s] Bayard Walters owns a cluster of radio stations. We became friends and decided to make an R&B station that focuses on classic R&B. But I wanted to play local soul and R&B. We play it twice a day, during the drive time, which guarantees that the greatest number of listeners can hear local artists.”

Gent, originally from Clarksville, Tennessee and now a Nashville resident, was a featured artist on a recent Red Bull-produced, sold-out show at Marathon Music Works and all local artists. Gent said that he feels a shift in the music scene, as it has slowly garnered more support in Music City.

“It’s changed a lot. Even two years ago I had taken a few publishing meetings on Music Row and played some music and never heard anything back. This year, I’m taking meetings with publishers and execs and they are more engaged than they have ever been. Even Red Bull’s involvement…there has been a real shift that I’ve seen personally of people who are interesting. Venues are reaching out to management and I’ve been here back and forth since 2011.”

“Sometimes it’s bridge building,” Davis said. “It takes something as simple as being introduced to people and connecting with people.”

“Everybody wants to be Jay-Z and Beyonce, everyone wants to be the artist out front,” Gent said. “Everybody is not going to be them, it’s just not that way. That doesn’t mean we can’t still have the same kind of culture. We have to start training the youth who want to be in music, and mentoring young executives. How can we transform a simple joy in music into a career?”

Thornton, who is a hit songwriter and producer for artists including Chris Brown and Bruno Mars, agreed. “There is so much talent, but we need the business infrastructure.” 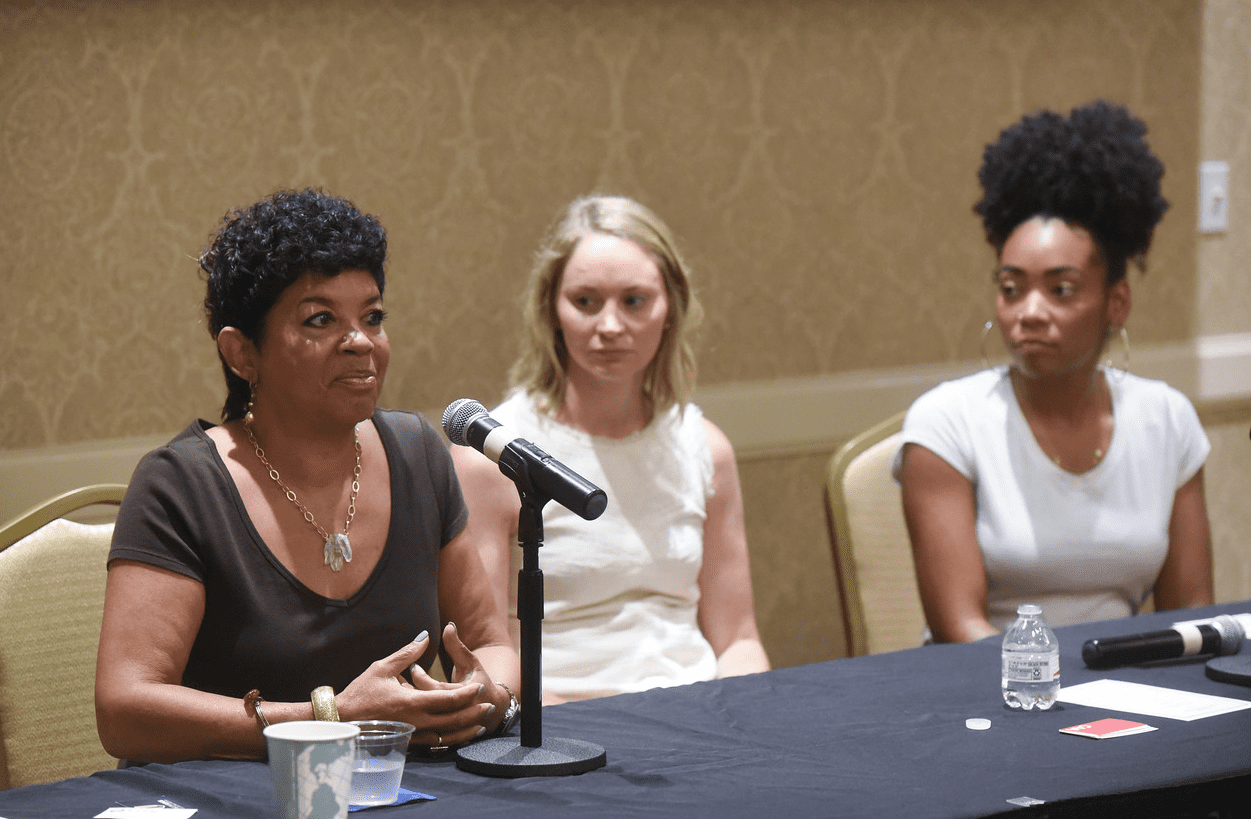 Another session, “Who’s in the Room Where It Happens: A Look at Women in the Music Industry,” was moderated by Belmont faculty Dr. Cheryl Slay Carr and featured these panelists: Gospel Music Association’s Jackie Patillo, Creative Artists Agency’s Coady Rapp and Universal Music Group’s Eryka Hammonds.

The panel discussed how women can get in the rooms where deals and decisions are made, and how they can better advocate for one another.

“For us at CAA, we are so focused on inclusivity right now that our rooms are looking way better than they did this time last year, when it comes to racial diversity, gender equality and all of those conversation pieces we are all having right now,” Rapp said. “To get in the rooms, have a perspective on every topic, even if it seems like a minute detail. Show value to the conversation and you will continually be asked in the room over and over again and then it becomes common place for you to be there. It’s making sure you are adding value quickly and having an opinion.”

“At the Gospel Music Association, it’s our job to unify and move the Christian and Gospel music industry forward, so I am in constant contact with all the heads of our labels, our songwriters, our artists, our managers, our producers,” Patillo said. “It’s been open to new ideas and hard work. Inclusivity for me doesn’t mean just color, it means age, too. I’m working with Bill Gaither and new artist Riley Clemmons. I’m not just working with gospel and southern gospel, but urban hip-hop, rap, and Kirk Franklin is different than Shirley Caesar. It’s being versed on more than your narrow personal taste. I think that’s one of the keys.”

They also spoke about the importance of listening and trying to understand various viewpoints.

“I will say this whole topic can be so messy and we have run into so many times where it’s a really complex conversation when there are so many levels of diversity when it comes to religion, race, socio-economics, all of these factors of diversity,” said Rapp. “So that’s where as a company—and it’s so important—to assume positive intent. It’s finding your friends or people you trust in the workplace and asking the honest questions. I have an African American female co-worker, and she’s like, ‘We can say the exact same thing and you are considered passionate and I’m considered angry.’ I think that’s such an important difference. As a white woman, the fact that that is something she deals with every day that I never even picked up on, now that she had told me that and we had that open, brave conversation, I’m so much more aware of that dynamic in every room.”

“ A lot of times I feel like you may have to again advocate for yourself first,” said UMG’s Hammonds. “I do our intern coordination, I’m not only looking for skills, but how can I include other people to bring people up in the industry? It takes not only getting yourself in that space but bringing other people along.”

“As someone who is in charge of hiring and developing and engaging our employees at CAA in our region, I echo the point of advocating for each other. When people come into an organization, don’t force them to conform into what already existed. The important thing is to always come from a place of positive intent. Help people get in the door, but once they are there, help them to bring their full selves into the office every day. Introduce them to your network.”

“Leadership is important,” added Patillo. “I have someone I’ve been mentoring. It’s being willing to raise other people up and help other people be successful.”