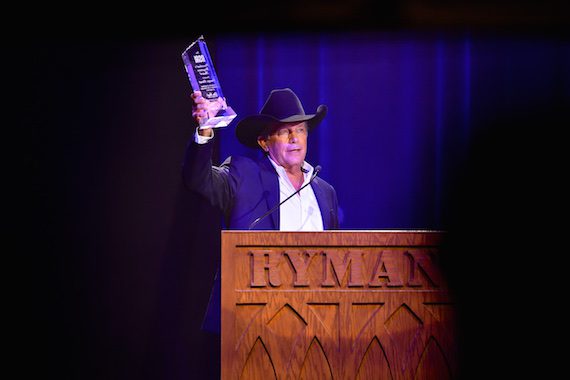 While this year’s Nashville Songwriter Awards, held Tuesday (Sept. 17) at the Ryman Auditorium, was certainly a star-studded event, the evening focused on quality songs and the talented tunesmiths who craft them, with the night’s winners ranging from legendary songwriters to newcomers.

The 2019 Kris Kristofferson Lifetime Achievement Award, given to recognize a songwriter whose works have made a significant contribution to the American songbook, was presented to Loretta Lynn, who wrote a significant amount of her own signature songs, including “Don’t Come Home A Drinkin’ (With Lovin’ On Your Mind),” “Fist City,” and “The Pill.”

“We can bestow no greater honor on a songwriter,” NSAI Sr. Director of Operations Jennifer Turnbow said of Lynn.

Video and performance tributes followed. Reba McEntire took to the Ryman stage to offer “You Ain’t Woman Enough To Take My Man,” her voice imbued with realness, hurt, bravery, and vocal skill.

Kellie Pickler offered “I’m A Honky Tonk Girl.” “I’m no Loretta, but I’m just going to do my best,” Pickler told the crowd.

“Listeners can sniff out dishonesty. If you write true lyrics, it reaches,” Rose said.

Following the performances, Lynn, 87, was escorted to the stage by Kid Rock.

“I’m Loretta,” she greeted the crowd as they offered thunderous applause. “I want y’all to know I love you for being here tonight. Thank you all, I love you.” 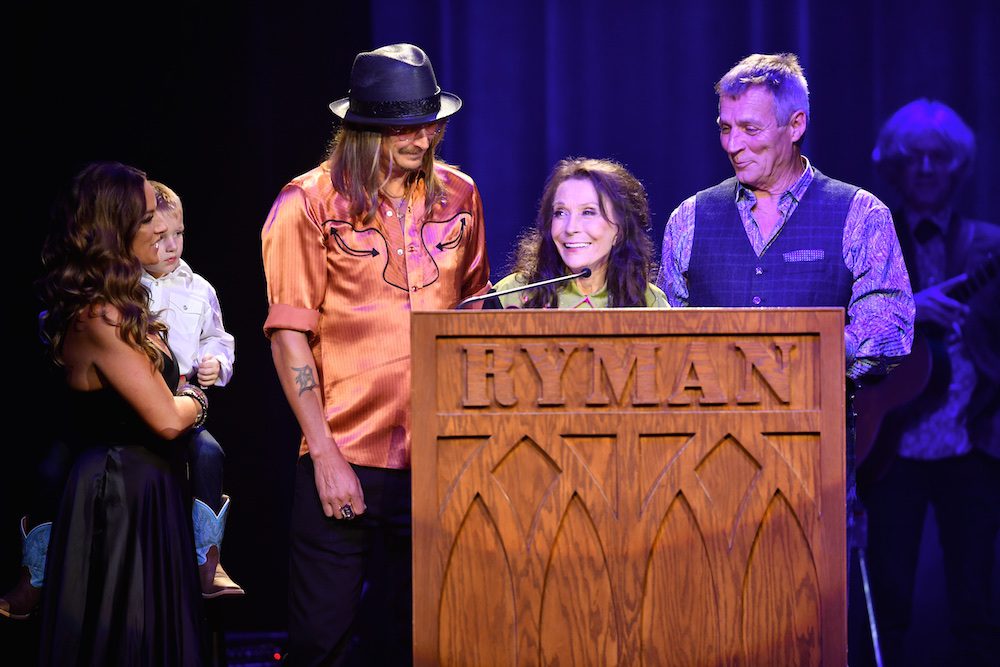 Meanwhile, songwriters overflowed with words of admiration for this year’s recipient of the President’s Keystone Award, George Strait.

Dean Dillon, who has written for Strait for more than four decades, and counts hits including “If I Know Me,” “Easy Come, Easy Go,” “Nobody In His Right Mind Would’ve Left Her,” among his catalog, offered a performance “Here For A Good Time,” which he wrote with George and Bubba Strait, as well as “The Chair.”

“I’ve always had an appointment on Monday morning at 10 a.m. to play him some songs on every record he ever cut,” Dillon told the crowd. “George, I thank you for that.”

Steve Bogard and Jeff Stevens performed a medley of “Carried Away” and “Carrying Your Love With Me.”

“I think songwriting is a gift from God,” Strait said told the crowd, and briefly alluded to the story of how Johnny Paycheck’s stint in jail kept him from recording the Dillon/Frank Dycus song “Unwound,” a track that Strait would go on to record, producing his first Top 10 hit.

“I’ve leaned on [songwriters] for years and they’ve been kind enough to send me some great songs to record and I really appreciate it,” Strait said. 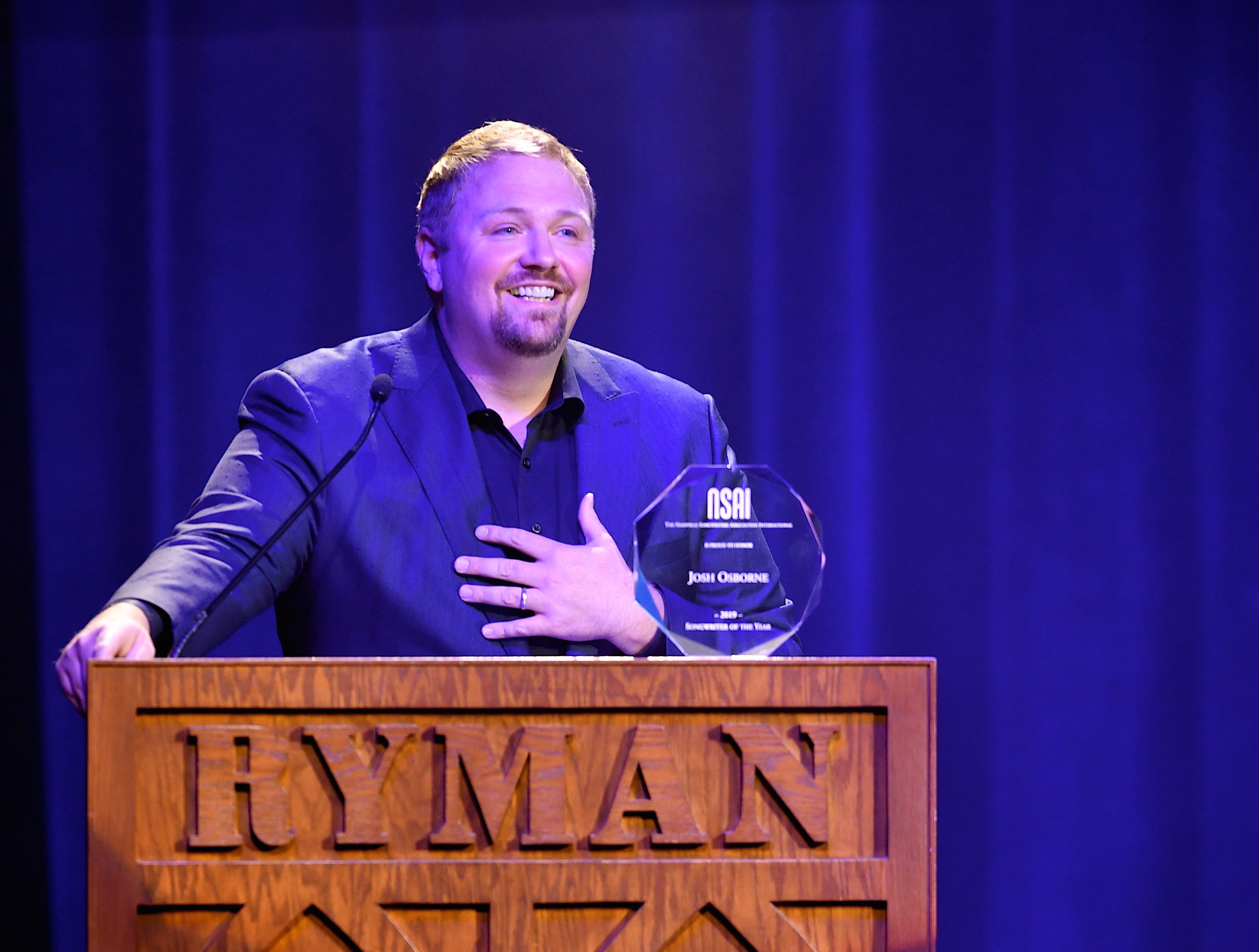 Luke Combs was honored as Songwriter-Artist of the Year. He was not in attendance, but accepted via video.

“This is the real cherry on top of everything we’ve gotten to do over the past year,” Combs said.

Josh Osborne, who has netted 18 No. 1 hits in his career, was named Songwriter of the Year.

Though the Nashville Songwriter Awards program book listed a performance of a new track titled “Sinning With You,” performer Sam Hunt decided at the last minute to tribute Osborne with “Come Over,” which Osborne penned alongside Hunt and Shane McAnally (who began the segment with a video tribute to Osborne) and was recorded by Kenny Chesney.

“Josh is one of the best songwriters in this town and I’m proud to be part of recognizing it,” Hunt said. Michael Ray offered a rendition of his chart-topper “One That Got Away.”

Osborne was moved by the honor, and accepted with a speech that was humble, humorous, and personal.

“[Songwriters] are insecure by nature, so to get an award on the same stage as Reba and Loretta, that will shake you down a bit,” he told the crowd.

Osborne thanked his wife Toni, letting the crowd know they are expecting their first child, a girl.

“Hopefully, Nicolle [Galyon], you can sign her to your label [the recently-launched Songs & Daughters]…verbal contract.”

He also noted that he moved to Nashville 21 years ago to write songs, and thanked all of his co-writers.

“I still wake up every day determined to prove I belong in that room with you.”

With George Strait sitting in the audience, Osborne also took the opportunity to mention an artist cut that has long been on his bucket list.

“I really, really want a George Strait cut,” he said. “I mean, really. So if anyone in this room knows how to make that happen….” As the crowd laughed and applauded.

Growing serious, Osborne noted that his father died nearly two years ago to the day. “I choose to believe he is seeing this,” Osborne said. “He would have had two questions: ‘Is Sam Hunt putting out new music?’ and ‘Are your seats better than Ashley Gorley’s?’ The answers are ‘Soon,’ and ‘Yes.’”

Senator Lamar Alexander was honored with The White Hat Award, for his work supporting the Music Modernization Act [MMA] and similar legislation that assists songwriters. Lee Brice was on hand to perform “Falling Apart Together,” a track from his 2010 Love Like Crazy album. Brice told the crowd how Alexander had supplied the title of the song; Brice then co-wrote the rest of the song with Billy Montana and Jon Stone, and gave Alexander a writer’s credit on it.

“I want to thank Lee Brice, Billy Montana and Jon Stone for teaching me a lesson in how songwriters get paid,” Alexander said, noting he earned $101.75 in royalties for an entire year from having an album cut.

“The name of this new law [the MMA] really ought to be the songwriters law, because you made it happen,” Alexander said. “So many of you came to Washington, D.C., brought your guitars, went from office to office telling your stories. You did it, you made it happen.”

The evening proved to be extra special for Dean Dillon, as he watched as his daughter, Jessie Jo Dillon, was honored alongside Chase McGill and Jon Nite for writing the 2019 Song of the Year, “Break Up In The End,” recorded by Cole Swindell.

After the three songwriters stepped on the Ryman stage, McGill thanked all of his fellow songwriters in Nashville, while Nite thanked his wife for her support.

“There was a moment I gave this up,” Nite told the crowd. “She gave me a [gift of] a [writers] weekend at NSAI. A couple of songs in, a publisher gave me a deal and here we are.”

“This is one of my favorite songs I’ve written,” said Dillon, who thanked her publisher Big Machine Music, Big Machine Label Group, and NSAI. She also offered encouragement to aspiring songwriters. “If there are songwriters who feel discouraged, worn out, or feel like you want to quit…don’t quit.”

Swindell performed the song alongside Dillon, Nite and McGill.

“Thank you for trusting me with this song,” Swindell said. “I’m just grateful you let me cut it.” 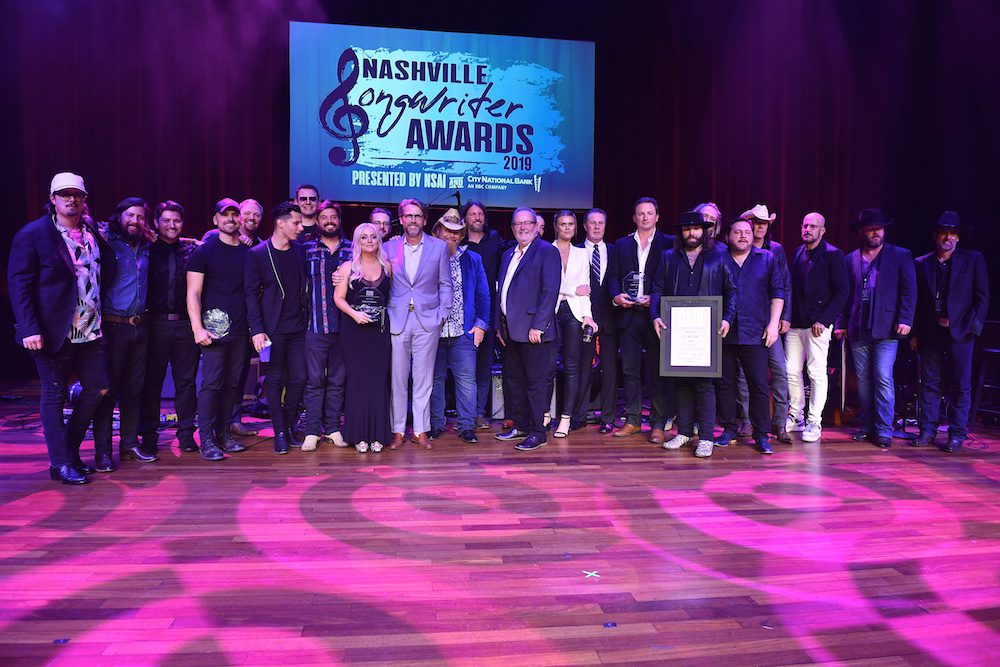 Also honored during the evening were the ’10 Songs I Wish I Had Written,’ which featured two songs recorded by Morgan Wallen, two written by artist-writer Michael Hardy and two written by Bobby Pinson.