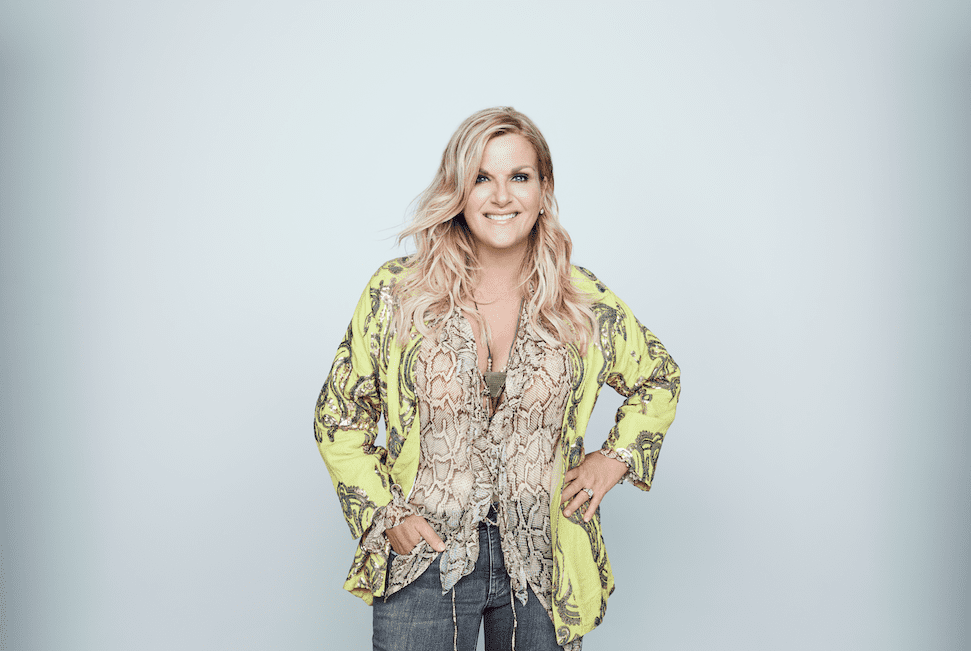 Trisha Yearwood has spent much of the past 12 years vastly expanding her multi-faceted business empire, as an author of three New York Times bestselling cookbooks, and curator and namesake for lines of cookware, furniture, home accessories, food products and cocktail mixes. September will see the 15th season premiere of her Emmy-winning cooking show Trisha’s Southern Kitchen on Food Network.

She spent the last few years on tour with husband and superstar Garth Brooks, and along the way, the pair recorded the holiday album Christmas Together. Earlier this year, she demonstrated her love of big band classics with Let’s Be Frank, a collection of Sinatra covers, as well as the original “For The Last Time” (a co-write with Brooks).

“It was pure joy making this album. I hear it in my voice,” says the three-time Grammy winner.

In some ways, the album’s title track, ‘Every Girl In This Town,” harkens back to the fearlessness and breezy hopefulness of “She’s In Love With The Boy,” the 1991 song that helped Yearwood establish both her fanbase and musical identity. However, this time around that fearlessness is born of a life well lived and learned from, rather than simply the naiveté of youth.

Throughout her 30-year career, Yearwood has earned acclaim for possessing one of country music’s most sterling voices and has etched a reputation as a song’s—and songwriter’s—best friend. She’s a singer with a deep understanding of musical nuance, a keen discernment for moments that call for nearly whispered restraint, or require her to lean into her voice’s power (see her unbridled performance on the new album’s “Tell Me Something I Don’t Know,” with harmony vocals from fellow powerhouse Kelly Clarkson). She’s somber yet uplifting on “I’ll Carry You Home,” romantic and sensual on “What Gave It Away,” (featuring Brooks).

She’s also uncompromising in her musical selections, something she learned from longtime producer Garth Fundis, whom she reunited with for Every Girl.

Two of the albums most engaging songs are also the most unexpected, coming from Yearwood.

A horn section lends gravitas to the Latin-tinged “Matador,” an aching tale of a woman in love with a matador–not unlike the rest of the adoring throng present in the arena. The song comes courtesy of Gretchen Peters, the writer behind several Yearwood classics such as “On A Bus To St. Cloud.”

“It’s so dark and so interesting,” Yearwood says. “To me the matador in the arena and the crowd, that is so Garth [Brooks]. Lines like He’s not alive without the thrill/without the dance, without the kill…we have to do this to survive. This is who we are. I totally feel it’s about Garth.”

Meanwhile, “Find A Way,” written by Lucie Silvas and Julian Emery, is a fun slice of retro-inspired pop, with a lightness in the song’s tightly wound harmonies.

“Lucie did a real acoustic, really energetic version that I fell in love with. It was so much fun. We started rehearsing and I’m getting a chance to sing it live and I’m like, ‘I can’t wait!’”

The album’s stellar closing song, “Love You Anyway,” is a quieter piano/vocal moment that draws on the vivid lyrics of songwriter Mike Reid, who also wrote the Bonnie Raitt classic “I Can’t Make You Love Me” and Ronnie Milsap’s “Stranger in my House.”

“He wrote the song for his wife and they’ve been married for over 40 years,” Yearwood says. “I asked him about that first line in the song—You’re the light that wounds the eye. What woman wouldn’t fall in love with a man that writes that line? He said he walked into a restaurant and saw her and he was like, ‘I just knew I was done for when I saw her. I knew it.’ That’s how I feel in my relationship, so it was a no-brainer.”

Providing harmonies on the track is longtime collaborator and Eagles member Don Henley, who first appeared on Yearwood’s 1992 songs “Walkaway Joe” and “Hearts In Armor.” Henley joined her on a 2000 cover of the Bryan Adams/Gretchen Peters song “Inside Out.” She returned the favor, performing several tracks on Henley’s 2015 album Cass County.

“When I kept hearing his voice on this song, I just shot him an email saying, ‘Can I send you this song?’ He’s been the kind of friend to me over the years, that I’ve been careful with that friendship because he will say ‘Yes.’ I don’t want to ever abuse that friendship. I’ll only ever go to him if it’s something I think is really special, and I think this song is so special.”

With the release of “Every Girl In This Town,” Yearwood earned the highest radio add day of her career—a feat in itself when few female artists can be found on the upper echelons of the country radio charts. Maren Morris recently earned a No. 1 single at country radio, the first female solo artist to do so in 17 months.

“I want to see country radio really embrace these female artists that are working really hard,” Yearwood says. “There’s not an argument that holds water, there’s no truth to the whole ‘You can’t play to women back to back because people will change the station.’ Show me the research—there’s no basis for it so just play it and let people decide. I didn’t expect to get played on the radio, so to have a song open well on the charts is crazy. It’s nice because with the conversation we’re having now out loud about females and radio, it gives me a chance to be a cheerleader for that and be a supporter for these younger female artists.”

One of those artists is Ashley McBryde. On the new project, Yearwood offers her own rendition of “Bible and a .44,” a deeply personal song McBryde wrote about her father and previously included on her own debut project.

“Ashley’s dad was a musician and there’s a line at the beginning that says ‘Every song he sang was my favorite sound.’ I asked if I could change it because my dad was not a musician, but he had a very distinct southern drawl and it’s what I remember most about him. But that’s the mark of a great songwriter, someone who can have their own story that is so personal to them and yet so relatable to others. And that’s the whole point of this, isn’t it? To be true to yourself and to be an artist.

“It’s so easy in music, if something is successful, to just jump on the bandwagon and then everything [sounds] the same. But it’s the artists who come out of left field that are special, and that’s why you get an Ashley McBryde or a Chris Stapleton or Brandi Carlile, things that come at you from a different angle.” Yearwood says she was nervous to set about finding quality songs for the album, another reason she reunited with Fundis.

“Most of the artists cutting songs now are in their 20s and I’m 54. Are there going to be songs for me? I needed a guy in my corner who gets it and is going to help fight to get great songs.

“I realized one great thing about being older is this second generation of song pluggers, they grew up on my music. I thought they would be like, ‘Hmmm, I don’t really care about getting a Trisha Yearwood cut,’ but they were all like, ‘I grew up on ‘She’s In Love With the Boy’ and I want to get a cut on your record.’ They really did work hard so I have to give it up to the song pluggers and publishing companies who dug deep to find these songs.”

On Oct. 3, she embarks on her first solo tour in five years, the 20-date “Every Girl On Tour.” The tour will launch with three shows at Nashville’s Schermerhorn Symphony Center.

Clearly a champion for every song on her new project, Yearwood says fans can expect to hear all of the songs from the new album throughout the tour.

“In the past, I’ve usually told the band, ‘Just learn the new single,’ but for this album, I said, ‘I want you to learn all 14 songs.’ I won’t sing all 14 songs every night, but I like to have something like ‘Find A Way’ in my back pocket to bring out on the nights where it feels good. I want to be able to do a couple of things from the new album and change it up every night.”