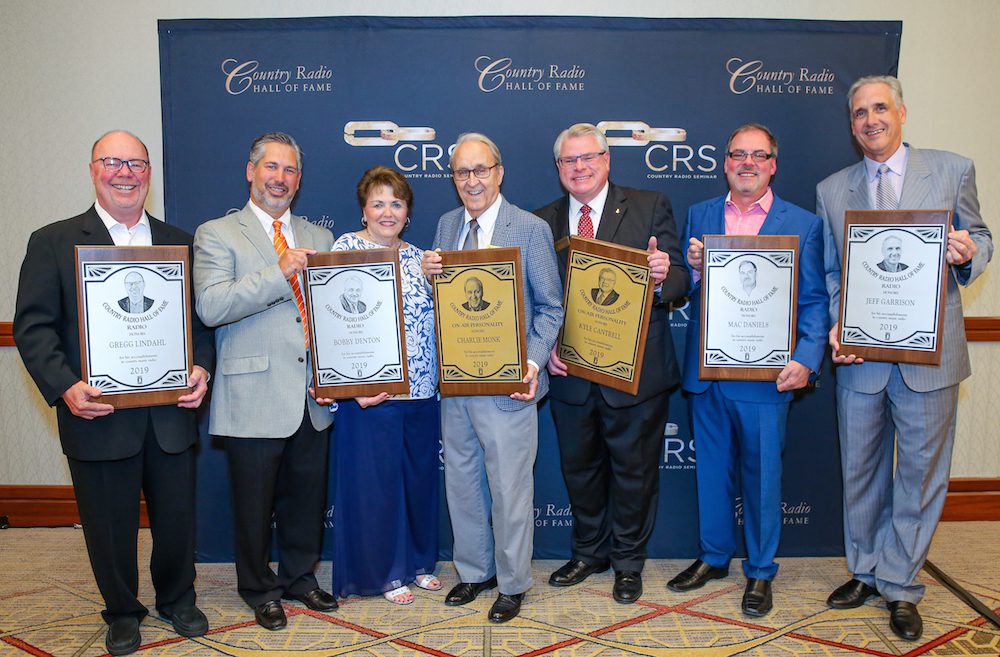 The Country Radio Hall of Fame banquet is on a roll again.

This annual event has struggled to survive in past years, but Wednesday night (June 19), the 350+ attendees were packed shoulder to shoulder. The celebrants were backed up all the way to the far walls of the ballroom in the Vanderbilt Marriott.

“I want to thank everyone for supporting this event,” said CRB executive director R.J. Curtis. “This is a big night: It’s our largest turnout ever.”

Current CRB board prez Kurt Johnson attributed the comeback to Bill Mayne, the evening’s first honoree. He has been the organization’s exec for the past 10 years, and has now retired.

“None of us would be here tonight, were it not for this man.” Johnson related. “Bill Mayne said, ‘I can save this. I can build this.’ He is a Music Row treasure.”

Johnson called Mayne, “the man who saved the organization” before presenting him with the President’s Award.

“I am humbled, truly,” said Mayne. “This President’s Award is about people….It’s about service, giving back. I am such a blessed man.” 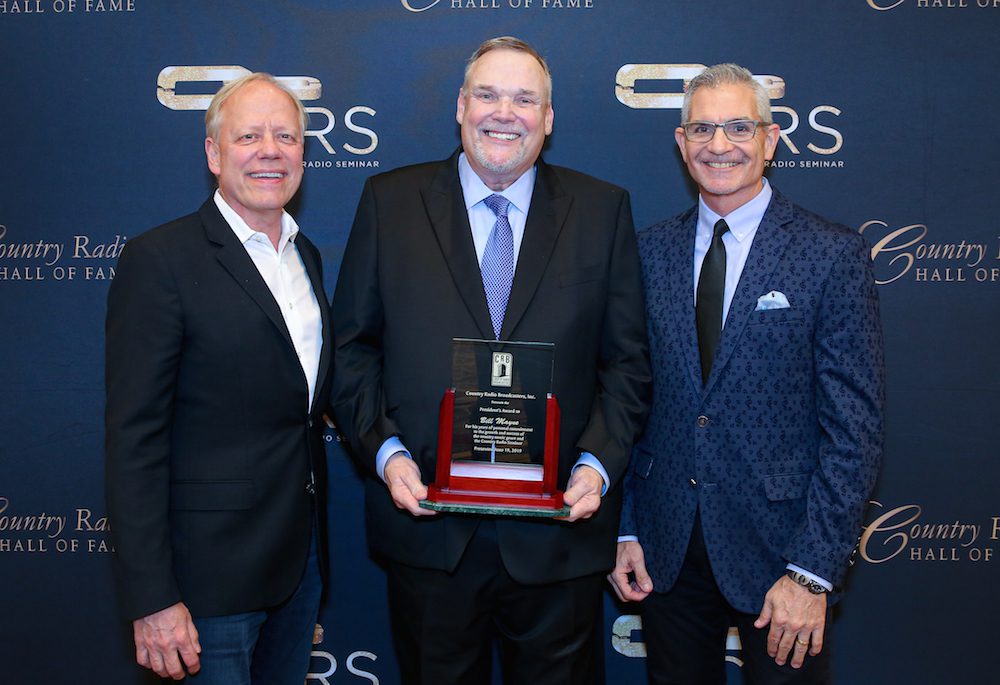 The banquet also inducted six new men into the Country Radio Hall of Fame. Founded in 1974, this Hall now has 173 members. It is an outgrowth of Country Radio Seminar, which celebrated its 50th anniversary earlier this year.

Each of the new inductees was introduced by a current member of the Hall. Sirius/XM honcho J.R. Schumann did the honors for Charlie Monk. Garth Brooks, Taylor Swift and Dolly Parton offered video tributes.

“I’ve waited so long for this, I’m not gonna thank a damn soul,” said Monk. “75 or 80 per cent of the people in this room tonight thought I was already in the Hall of Fame.

Monk’s acceptance speech was astonishingly brief. His was the shortest of the night, even when you include the onstage ribbing from his wife, Royce Monk.

The late Bobby Denton (1940-2014) was a legend of radio in East Tennessee. He put Dolly on the air when she was a singing teen and coined the UT sports phrase, “It’s Football Time in Tennessee!”

Singer Con Hunley accepted on Denton’s behalf: “Bobby was a great friend of mine for nearly 50 years,” said Con. “He was very instrumental in my career. I loved him. I miss him every day. I am so proud and honored to stand in for the one-and-only Bobby Denton.” The inductee’s family and WIVK colleagues added to the honor.

Inductee Gregg Lindahl has worked for 20 years at 10 stations in seven different markets, including Oklahoma City, Charlotte, Chicago and Nashville.

“I worked with some terrific teams…and I share this honor with my teammates and coaches,” said Lindahl. “I received — and continue to receive — more from country radio and country music than I ever gave. And I continue to be blessed.”

“This business has been so good to me,” said Cantrell. “I don’t know why the Lord set out this path for me. But I thank Him for country music, for the friends I’ve known over the years. I would be literally nothing without Him. “This is a dream that I have greatly enjoyed.”

“There’s a lot of love in this room,” said Daniels. “It’s the love of country music, which I consider to be the best damn music made.

“What an incredible honor. It’s still unbelievable that I’m going to be in these ranks. “This journey has been more than I ever imagined. From the bottom of my heart, I love you all. And I love country music.”

Mick Anselmo inducted Jeff Garrison, who stated, “I never thought I’d be here tonight….It’s a humbling honor to be in the Country Radio Hall of Fame. I can truly say it’s been a wonderful life.” 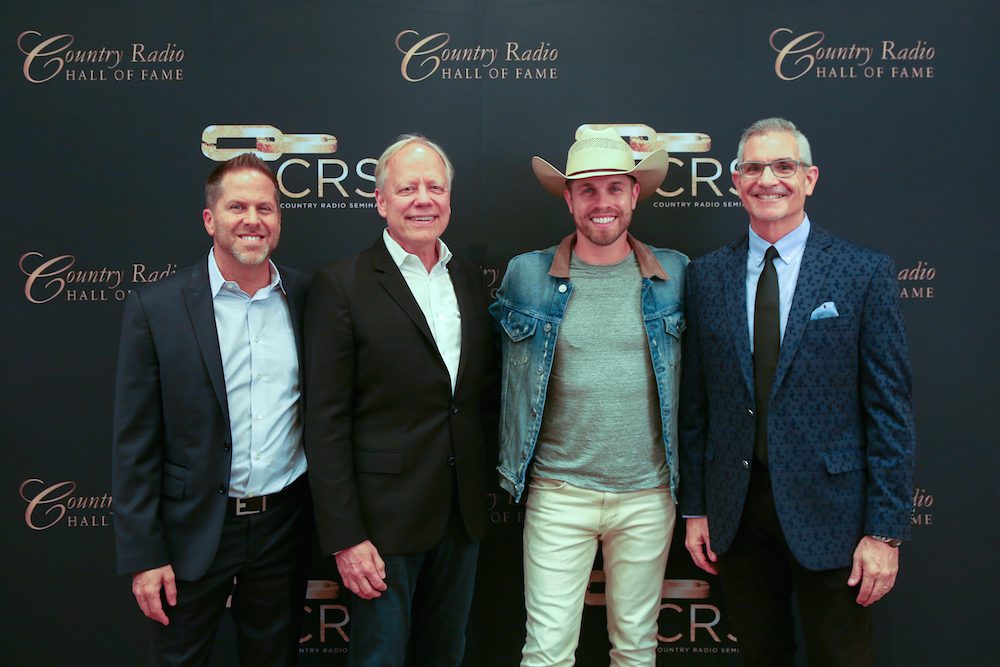 Garrison has spent the majority of his career in such Texas markets as Houston, Austin and San Antonio. He has also programmed country for CBS Radio and Cox Media.

Prior to the awards ceremony, the attendees were serenaded by Dustin Lynch. He did an acoustic, two-song set consisting of his career-launching “Cowboys and Angels” and last year’s “Good Girl.”

“Thank you for changing my life,” said Lynch, before departing for an Opry performance. He became a cast member on the show last September.

Meanwhile, a storm raged outside, downing power lines and tree limbs. We were oblivious. We also chose to overlook the facts that the hotel was surrounded by construction fencing and had no lobby. 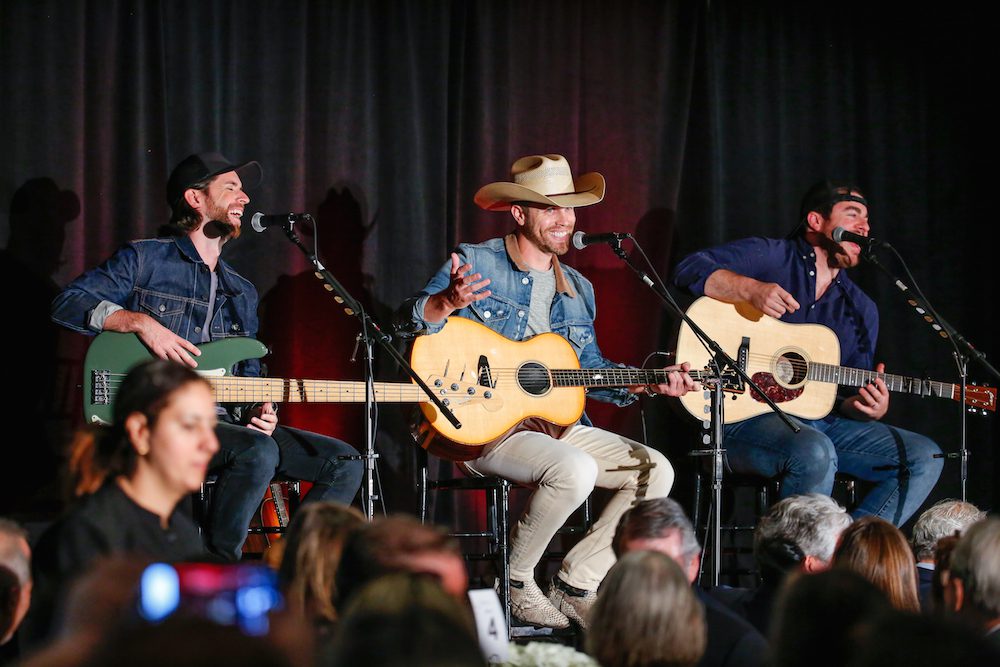