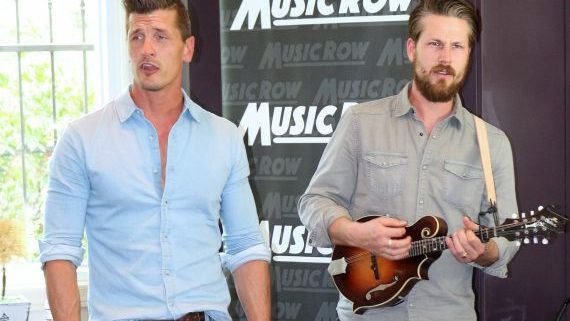 In 2016, the duo High Valley released their debut album, Dear Life, which earned the duo a Gold-certified single with “Make You Mine,” as well as “She’s With Me,” which became the duo’s first Top 10 single.

Now, High Valley’s Brad and Curtis Rempel are back with new music–and a new album on the way.

“We are over halfway done with the new record and we are quite certain that by the end of the year it will be totally completed. But we are writing so many songs that we want to keep putting out new music,” Brad said during a recent visit to the MusicRow office. He estimates the duo has penned more than 100 songs while creating the upcoming album, set to release on Warner Music Nashville.

Following an acoustic rendition of “She’s With Me,” High Valley performed a new track, “Your Mama,” noting this was the second time they had ever performed the song.

“This song salutes our wives and it’s a great message to our kids at the same time,” said Curtis, whose family includes wife Myranda, son Ben (5) and daughter Millie June (2). Brad Rempel is husband to wife Rebekah and father to sons Drew (10) and Cash (7).

The duo’s new single, “Single Man,” penned by Brad Rempel alongside Derrick Southerland, and Jordan Schmidt, pulls from the same bluegrass sensibilities displayed on “Make You Mine,” while meshing them with a driving energy and earnest lyrics that praise family life. The song was penned following a redeye flight back to Nashville following a concert, as the duo balances songwriting, touring and making time for their families.

“We have a lot of red-eye flights,” Brad notes. “There were two Seattle gigs last year where we got offstage, went to the airport and flew to get back to Nashville for a 9 a.m. game the next morning. If you can get offstage and fly from Seattle to Nashville, that’s how the stars are really aligning…”

“But you can’t see them because your eyes are bloodshot,” Curtis interjected.

Last year, High Valley played 100 shows to over 500,000 fans, and already have several festival dates on the books through July.