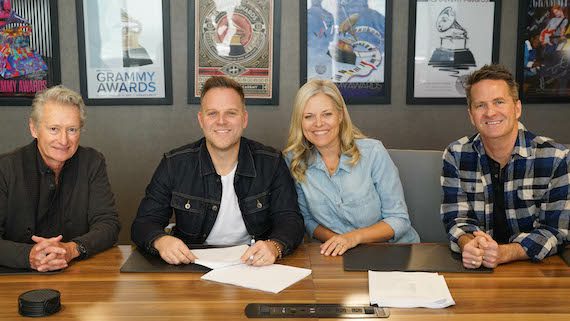 Provident Label Group/Sony Music have signed Matthew West to their roster. In conjunction with their new partnership is the newly-created imprint Story House Music, which mirrors West’s management company, Story House Collective. With support from Provident, West will develop and launch young artists’ careers through the new imprint.

“I am beyond excited for the opportunity to partner with my friends at Provident,” West said. “I’ve admired from afar the work they have done on behalf of so many artists, and I am humbled by their belief in the music I make and the vision I have to help champion the storytellers of the future. Much of my career could be boiled down to one word, ‘story.’ I’m passionate about the power of story and how music can impact the stories of peoples’ lives on a deep level. In many ways, this new season with a new team marks a new chapter in my own story, and I can’t wait to dive in.”

Terry Hemmings, President/CEO of Provident Label Group/Sony Music, said, “For years we have observed Matthew’s amazing career. He’s such a wildly talented artist and performer whose talent is evident in various forums as a musician and entertainer. He connects with audiences because he knows how to clearly and passionately share a story through song. We could not be more pleased to have Matthew join our PLG family and are anxious to forge ahead and see what stories unfold.”

Since releasing his first album 16 years ago, West has earned four Grammy nominations, a Dove Award, Billboard Music Award, and an American Music Award, as well as several ASCAP Christian Music Songwriter/Artist of the Year honors. He has notched 15 No. 1 songs, including the RAA Gold single “Hello, My Name Is,” and the RIAA Platinum single “The Motions.” As a songwriter, West has had more than 130 published writing cuts for artists including Rascal Flatts, Scotty McCreery, Casting Crowns, Amy Grant, Michael W. Smith, Mandisa and more.