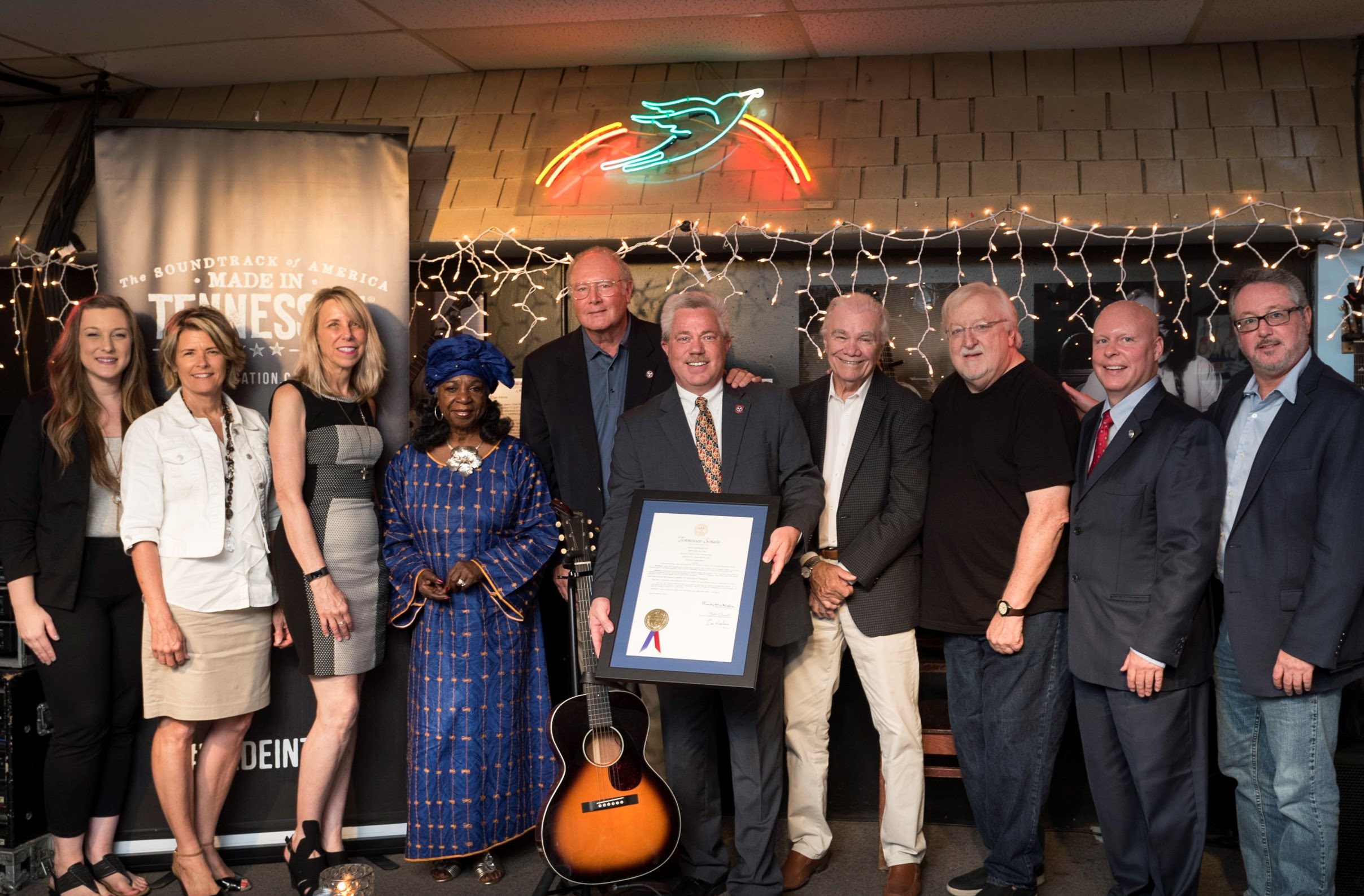 Today at the historic Bluebird Cafe, the Tennessee Department of Tourist Development and Nashville’s Bluebird Cafe celebrated the official designation of the last full week of February as “Tennessee Songwriters Week.”

The week is designed to celebrate the foundation of the craft, recognize songwriters and pave the way for future artists. The historic Bluebird Cafe is where some of the world’s most talented songwriters got their start and where up-and-coming artists perform nightly.

Nashville Songwriters Hall of Fame member Pat Alger, known for writing hits like Garth Brooks’ “The Thunder Rolls,” & “Unanswered Prayers” and Nancy Griffith’s “Once in a Very Blue Moon” performed, explained stories behind the songs and shared how the art of songwriting touched his life. Other distinguished songwriters also attended, including Dickey Lee, whose six-decade career beginning with his first recordings in his hometown of Memphis at Sun Records branched to hits like “I Saw Linda Yesterday,” George Jones’ “She Thinks I Still Care” and “The Keeper of the Stars” (ACM Song of the Year) by Tracy Byrd; and Bettye Crutcher, the most successful female songwriter at legendary Stax Records in Memphis, who co-wrote Johnnie Taylor’s “Who’s Making Love.”

“Music touches our souls and is a vital part to Tennessee’s culture and heritage,” said Gov. Bill Haslam. “Tennessee musicians have brought us the blues, bluegrass, country, gospel, soul, rockabilly and rock ‘n’ roll. This law will honor past and present songwriters and inspire future artists to collaborate. I’m honored to sign this law promoting one of our greatest assets and largest exports to the world – Tennessee music.”

Tennessee’s musical roots are the motivation for Tennessee Tourism’s “The Soundtrack of America. Made in Tennessee.” brand, which boosted tourism’s economic impact to a record $19.3 billion, and $1.7 billion in state and local taxes.

“Fans from all around the world have been impacted by music recorded in Tennessee, which starts with the crafting of the song itself,” said Commissioner Kevin Triplett, Tennessee Department of Tourist Development. “’Songwriters Week’ celebrates the foundation of the craft for which we are known, music. It recognizes contributions of past, present and future songwriters. Music is a universal language with roots in every direction to Tennessee and is celebrated, performed and heard every day of every week in Tennessee and around the world.”

Local businesses are encouraged to participate in Tennessee Songwriters Week by programming special events such as open mic nights and songwriter showcases that celebrate songwriters and drive visitation. The last week of February was chosen because it’s a time of year that tends to be slower for most Tennessee destinations. To help get the effort started, the Department of Tourist Development has entered into a partnership with Nashville’s famous songwriter venue, The Bluebird Cafe.

“Many writers still remain in the shadows of the music business and designating a week to focus the spotlight on the men and women who make the hard work of songwriting look easy confirms Tennessee’s place as the songwriting capital of the world. The Tennessee Department of Tourist Development has often been the catalyst for drawing attention to the songwriters behind the hits, and their support of our Nashville Songwriters Hall of Fame public television show ‘The Songwriters’ is a prime example of their commitment to our craft,” said Alger, songwriter and board chair of Nashville Songwriters Hall of Fame Foundation, Hall of Fame Class of 2010.