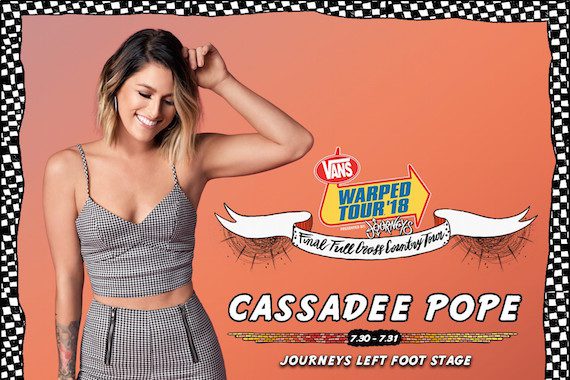 In the latest bit of crossover touring, Cassadee Pope will join the Vans Warped Tour for select shows on July 30 (Charlotte, N.C.) and July 31 (Atlanta). For Pope, the Vans tour marks a return to the same stage she performed on eight years ago, when she was the lead singer of punk band Hey Monday.

“Growing up, the thought of playing Warped Tour was a dream,” says Pope. “Now, not only do I get to say ‘I played Warped Tour twice’, I get to perform songs that I poured my heart and soul into over the last few years. It almost feels like a graduation of sorts for me, and I can’t wait to get on that stage and get all nostalgic!”

Earlier this year, Pope released her latest single, “Take You Home.” Pope won season 3 of The Voice, and followed that with her 2013 full-length debut album, Frame By Frame. Her single “Wasting All These Tears” earned RIAA Platinum certification. In 2016, she teamed with Chris Young for the No. 1 hit “Think Of You,” and opened shows for Tim McGraw, Dierks Bentley and more.

The Warped Tour held its inaugural run in 1995, hosting major acts such as Sublime, Blink-182, and Green Day. This year, Pope will perform alongside bands including 3OH!3, Mayday Parade, and Reel Big Fish.