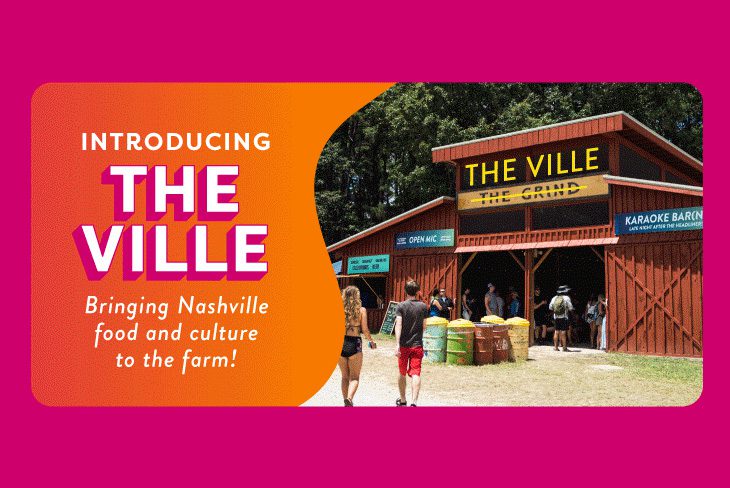 Bonnaroo is teaming up with The Nashville Convention & Visitors Corp’s Visit Music City to present The Ville, an all-new experience dedicated to celebrating Music City’s unique history, music, art, food and more at this year’s festival June 7-10 on The Farm at Great Stage Park in Manchester, Tennessee.

The Ville offers festival-goers a chance to experience the lesser-known aspects of Nashville, including an array of music, food, art, apparel, and comedy specifically curated and inspired by Nashville. Fans will be able to enjoy musical pop-up performances and artist appearances along with representatives from Nashville radio stations WRLT, Lightning 100, 102.1, The Ville and The Grand Ole Opry’s flagship, WSM 650 AM. Other highlights include a Saturday morning Open Mic hosted by Okey Dokey; DJ sets, and Late Night Karaoke (Feat. T-Pain). The Grand Ole Opry is also staging its first-ever show from Bonnaroo on Sunday, June 10.

“We are excited to continue to expand our partnership by bringing Nashville’s creative spirit to Bonnaroo with the Ville,” said Butch Spyridon, President and CEO, Nashville CVC. “The Nashville creative scene is exploding, and by sharing a taste of it with Bonnaroovians from all over the world, we hope that we can not only enhance the attendees’ experience at the festival but also entice them to visit Nashville and see the city first-hand.”

Among the experiences available in The Ville will be a showcase of foods beloved and inspired by Nashville including the world famous Prince’s Hot Chicken, Farm to Taco Nashville, and much more. In addition, The Ville Café will feature 8th and Roast selling a small batch “Bonnaroo Blend,” with a portion of all proceeds benefitting the Bonnaroo Works Fund. It will also feature artworks from many of Nashville’s finest new artists, curated and presented by Nashville makerspace and arts collective Fort Houston, pop-up shops from Third Man Records, Nashville-based apparel company Project 615, and, Hip Zipper, Nashville’s Original Vintage Clothing Store, and comedy sets from 5-6pm daily, featuring appearances from Sheng Wang, Martin Urbano, Taylor Tomlinson, Drennon Davis, Jon Gabrus, Shane Torres, Michelle Buteau, and more.