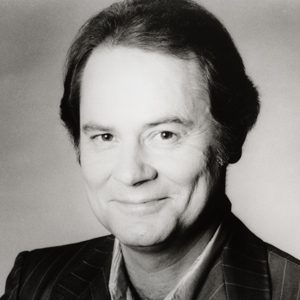 O’Dell won the Best Country Song Grammy Award as well as the CMA Song of the Year award for “Behind Closed Doors,” a giant 1973 pop and country hit for Charlie Rich. He also wrote Rich’s 1972 country hit “I Take It On Home.”

In 1984, his song “Mama He’s Crazy” launched the chart-topping career of The Judds.

O’Dell’s “Why Don’t We Go Somewhere and Love” has been recorded by a number of artists, including Sandy Posey, Bobby Goldsboro, Kenny Rogers, B.J. Thomas, Charlie Rich and Roy Clark.

The hit songwriter was also a recording artist. Kenny O’Dell made the pop charts in the 1960s with “Beautiful People” (1967), “Springfield Plane” (1968) and “Happy With You” (1968). He became an even bigger success in the following decade as a country singer.

He was born Kenneth Gist in Oklahoma and was raised in California. He was writing songs by age 13. After graduating from high school, he launched his own record label, May Kay Records, and began recording pop singles for it. He changed his last name to O’Dell at this time.

Early songwriting successes came in 1967 with Bobby Vee’s recording of “Beautiful People” and Rose Garden’s version of his “Next Plane to London.”

O’Dell moved to Music City in 1969. He became a staff songwriter at House of Gold, the publishing company operated by Goldsboro and Bob Montgomery.

He was the NSAI’s Songwriter of the Year in 1984 and was inducted into the Nashville Songwriters Hall of Fame in 1996.

Kenny O’Dell was married to guitarist Corki Casey O’Dell (1936-2017), a member of the Musicians Hall of Fame due to her studio work with Duane Eddy, Al Casey and others. She passed away last May.

Visitation for Kenny O’Dell will be Saturday, 2-8 p.m. at Woodbine-Hickory Chapel, 5852 Nolensville Rd.