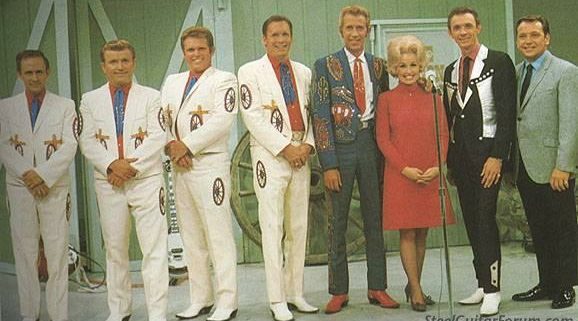 Funeral services for Mr. George Washington McCormick, 84 of Silver Point and formerly of Nashville, will be held Friday, Feb. 9 at 1 p.m. at the Baxter Chapel of Hooper-Huddleston & Horner Funeral Home. Interment will follow in Crest Lawn Cemetery. Rev. Tony Crow will officiate.

George’s family will receive friends Thursday from 5 p.m. until 8 p.m. and again Friday from 11 a.m. until service time at the funeral home.

He was born June 16, 1933 in Smith Co. to the late Jesse Joseph and Della Lee Burton McCormick. A gifted musician and vocalist, George moved to Nashville at age 14 to play music and work at WLAC radio. He began his Grand Ole Opry career in 1951 to sing and play with Martha Carson. In his 47 years at the Opry, he played guitar and bass fiddle and sang harmony, tenor, baritone and lead with Opry artists including Wilma Lee and Stoney Cooper, The Louvin Brothers, Jim Reeves, Porter Waggoner, Dolly Parton and Grandpa Jones. He retired from the Opry in 1998 was a member of the AFL-CIO Musicians Union.

Described as one of a kind and a character, George enjoyed telling stories, laughing and joking with his family and many friends. He attended Smith Springs Baptist Church and Nolensville Baptist Church while in Nashville and was currently attending Silver Point Baptist Church.

In addition to his parents, he was preceded in death by brothers, David McCormick, Joe McCormick and Billy McCormick; sister, Betty McCormick; and by step-daughter, Anita Zemuncek and granddaughter Andrea Gregg.

Family and friends will serve as pallbearers.