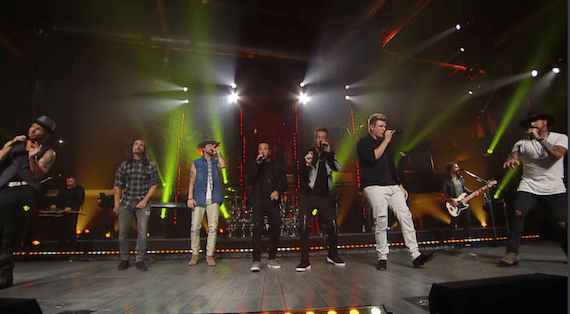 CMT’s seminal music series, CMT Crossroads, notched its highest ratings in more than five years with the pairing of pop group Backstreet Boys with country duo Florida Georgia Line. The episode, which aired Wednesday, Aug. 30, became the highest-rated Crossroads among Adults 18-49 (.21) and Women 18-49 (.34) since another cross-genre mashup with Steven Tyler and Carrie Underwood in 2012 (Nielsen Live+3).

Following the telecast, Florida Georgia Line reported triple-digit sales gains on iTunes for singles performed on the show. On the day following the premiere versus the same day a week prior, “Smooth” netted a 172 percent increase on iTunes; with similar gains for “God, Your Mama, And Me” (+131%), “H.O.L.Y.” (+123%) and “Cruise” (+122%). Backstreet Boys reported a +22 percent increase in streaming overall.

The special was a hit with fans on social media as well, with #CMTcrossroads trending nationally and ranking in the Top 5 most-talked about Cable Premieres across Facebook and Twitter that night. The episode garnered over 18,000 interactions on social, with the bulk of those on Facebook. Nearly 88 percent of the interactions on Facebook were generated by females according to Nielsen Social.

Taped in front of a live audience in Franklin, TN, “CMT Crossroads: Backstreet Boys and Florida Georgia Line” features collaborations on songs including “I Want it That Way,” “As Long As You Love Me,” “H.O.L.Y.,” “Cruise” and more. The groups, who also happen to be great friends, recently performed together for sold-out crowds at Boston’s Fenway Park, Chicago’s Wrigley Field and Minneapolis Target Field as part of FGL’s headline The Smooth Tour 2017.