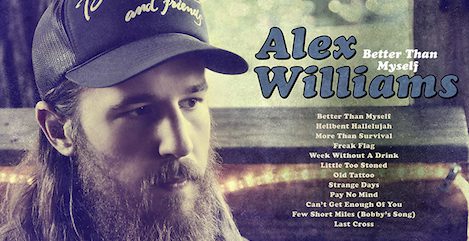 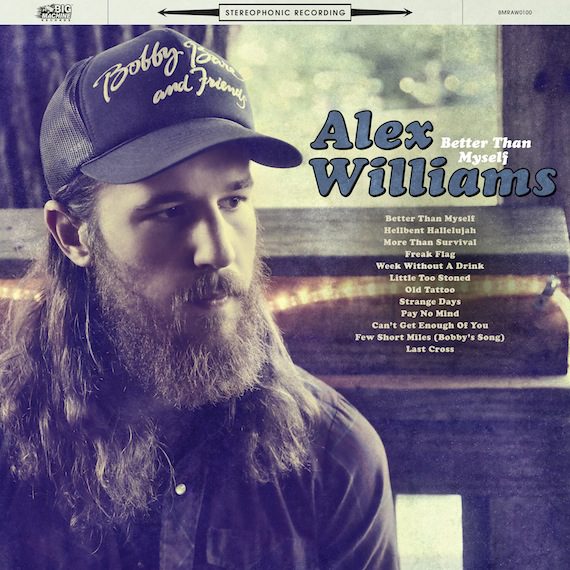 1975 was a pivotal year for country newcomer and Big Machine Records artist Alex Williams, though he wasn’t even born yet. It was the year Willie Nelson released his iconic album Red Headed Stranger, and Waylon Jennings released Dreaming My Dreams.

Growing up in Pendleton, Indiana, just under an hour away from Indianapolis, Williams drew his early musical leanings from his father’s love of ‘80s hair metal. Then, at 16, Williams discovered those classic Nelson and Jennings albums, borrowed from his grandparents’ vinyl collection.

“I could just hear the fearlessness. I was not really a country fan until I heard those,” Williams tells MusicRow. “Waylon has a really rock influence from Buddy Holly and with Willie, I don’t know what it was about it, but I was really drawn to it from start.”

Williams began writing his own songs, recording what he calls a “terrible” CD of original tunes while still a teenager. “But at least they were original,” he says. “My voice has changed over the years, but I really got into ‘60s and ‘70s country, so I think that influence is there, definitely.”

After moving to Nashville for a stint at Belmont University, he formed the neo-classic country band Williams & Co. with several classmates, releasing an independent album in 2012. Williams ultimately decided to continue his musical education in much the same way as his musical predecessors—by hitting the road and testing his songs out on new audiences. He made his way to Texas, writing songs and performing in dive bars, before returning to Nashville and ultimately signing with BMLG.

On his debut album, Better Than Myself, which releases Friday (Aug. 11), Williams blends a multitude of musical influences with his own staunchly independent take on the world as he sifts through his musings and life experiences, infusing his songs with relatable stories, quirky characters, and unflinching honesty.

The day’s too long and life’s too short/To ride on the wagon, he sings in defense of a taste for alcohol on “Week Without A Drink,” and throws a few comebacks of his own at those he considers hypocrites on “Freak Flag.”

“Old Tattoo” and “Few Short Miles (Bobby’s Song),” Williams’ two solo-penned tracks on the album, are among his most personal. “They took me the longest to write, because I didn’t want to screw them up,” Williams says. “It took maybe a year to write each one.” 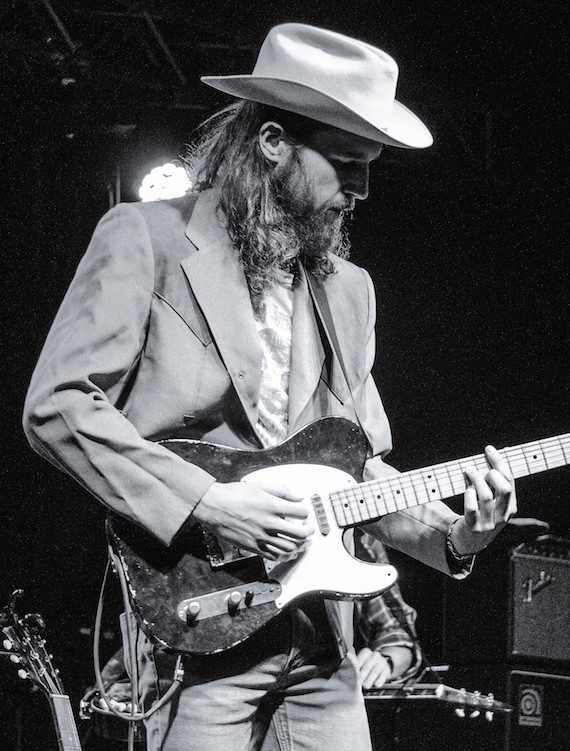 “I used to play gigs at a seaside trucker bar my cousin owned that was south of Houston in a little town in Sargent. I was 17 or 18, and I met Bobby at one of the gigs I was playing and he was a really inspiring guy. We became really good friends in a short period of time while I was playing down there. I decided to write a song about it. He had cancer for a while and I didn’t know that until the last few weeks before he passed.”

Williams turns that laser focus inward on tracks like “Better Than Myself,” and “More Than Survival,” which chronicles the struggle between the necessity of making a living and the desire to live life to its fullest potential.

“Over the course of the past few years of playing music I’ve seen a lot of that and it’s like always that fear there. It may sound cliché but it’s just seeing people just surviving rather than really living. They are just trying to get through it. It’s not taking a stab at people. It’s directed at myself in a lot of ways because I worked in warehouses and as a pizza delivery guy and it was like, ‘What the hell am I doing?’”

On the album’s title track, “Better Than Myself,” Williams turns that laser focus inward with stark self-appraisal.

Williams penned the song toward the end of his time as part of his previous band, Williams & Co. The song title was inspired directly by a frank, tense conversation with one of Williams’ former bandmates, who told Williams at the time, “Your songs are better than you are.”

“He probably thinks I’m a complete asshole,” Williams says. “I was like, ‘That sucks to hear, but I’m going to write that down.’ And I did. I ended up starting it in the back room of a venue we were playing when were finishing up a gig. I started it and it became the centerpiece of the whole thing. I don’t see it as stab at anyone, I see it as kind of a new beginning for what I’m doing.”

While his time in Williams & Co. served as a rough, though thorough, training ground for life as a touring musician, Williams’ solo turn was a long time coming.

“I think I was just lying to myself for a long time. I’ve always wanted to do my own thing,” Williams says. “Being in a band that was kind of doing more of a hippie thing, that wasn’t really my path. It was pretty freeing to go out on my own.”

On his solo album, he borrows equal sonic influence from The Black Crowes and The Allman Brothers Band as he does from Nelson or Jennings, and his rough-hewn baritone sounds at home in the mix of steel and electric guitars, harmonicas, drums and dobros.

In Marshall Altman, Williams found a kindred songwriting spirit. The pair collaborated on four of the album’s dozen tracks, including “More Than Survival.”

“He challenges me as a songwriter, just going into his studio at 9 at night and working on songs, it produced a lot of songs on the album. He’s a quirky guy and I dig that. He’s a fearless songwriter. There are no boundaries and he doesn’t try to make something what it’s not.”

He caught the attention of Big Machine Label Group’s Julian Raymond, who has worked as a songwriter and producer on albums from artists including Glen Campbell, Hank Williams, Jr., and Jennifer Nettles. Raymond had Williams make an acoustic demo of a few tracks, including “Better Than Myself,” which he sent to BMLG founder/CEO Scott Borchetta.

“He got the green light to make the album. I didn’t think that was going to happen for a while,” Williams notes. “But they gave me a chance to make an album with substance that I wanted to make. That’s pretty cool coming from a major label. They haven’t given me any boundaries, which is great.”