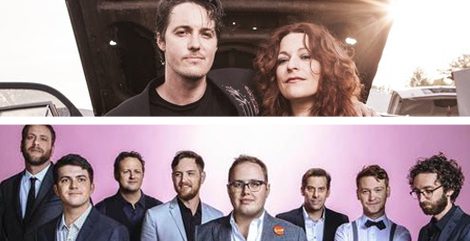 St. Paul & The Broken Bones will play two shows at the Ryman Auditorium on February 16-17 in support of their sophomore release Sea Of Noise, which was released in September. The group made a splash with their debut CD Half The City in 2014 and went on to make appearances on CBS Saturday Morning, Jimmy Kimmel Live, The Late Show with David Letterman and The Late Late Show with Craig Ferguson.

Husband & wife duo Shovels & Rope will also play two nights at the Ryman Auditorium the following two days on February 18-19 in support of their album Little Seeds, which released October 7 on New West Records. The duo has appeared on Conan, Austin City Limits, PBS Bluegrass Underground, and The Late Show with David Letterman. The has played almost every major U.S. festival including Bonnaroo, Coachella, Lollapalooza, Newport Folk, Sasquatch, and Hangout.