Dierks Bentley‘s name may appear alone on his chart-topping album Black but he is quick to point out that hundreds of people have worked on both the album and the Somewhere On A Beach Tour for more than a year and his success is as much a testament to their work as it is his.

The multi-platinum singer/songwriter has long been known for embracing the community that surrounds him. With Behind Black: The Anatomy of the Album & Tour, Bentley introduces the group who had a behind-the-scenes hand in bringing it all to life; his family, management team, producers, collaborators, musicians, songwriters, record label executives, touring crew and industry supporters.

“At some point during the middle of our album release and tour rehearsals, I made the comment that I really wish we had been capturing all the people involved in making all the pieces come together because I don’t think the fans truly understand who all is behind their favorite song on the record or what it took to build the airplane that crashes on to the stage during our live show,” said Bentley. “So this web project was a way for me to give a little credit to all the people who work so hard to help me make my dreams come true, and it’s also a way to document a really special time in my career. I’m so grateful to the village of people it took!”

Behind Black: The Anatomy of the Album & Tour explores a community’s firsthand contribution to Black including collaborators and friends such as Maren Morris along with tourmates Cam and Randy Houser. Grammy-nominated Elle King is also featured as she shares vocals on the album’s thought-provoking Top 20 single “Different For Girls.” 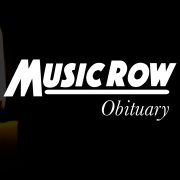