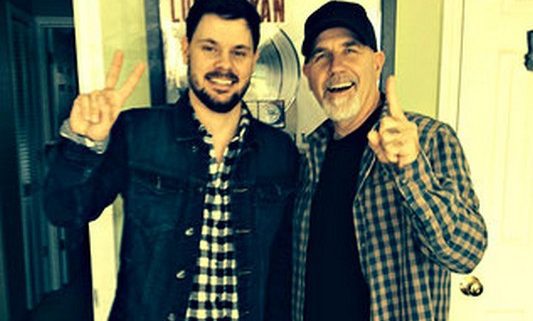 Jeff and Jody Stevens appeared on The Producer’s Chair on Thursday, December 10, 2015, at Douglas Corner at 6 p.m.

I was floored when I found out that father and son Jeff and Jody Stevens, who are co-producer’s on Luke Bryan’s Kill the Lights album, share such amazingly similar journeys. They were both completely immersed in music long before their teens. They’re both hit songwriters and multi-instrumentalists. They were both signed to major labels as artists. They both signed to major publishing companies and now they have both knocked it out of the park as producers on their second time at bat.

In contrast, Jody is an SAE graduate and an engineer and programmer, but Jeff is not an engineer, and they come from two completely different generations musically. Jeff grew up on traditional country and Jody grew up on 90s country, rap and alternative music. So considering where country music has gone … good call, Luke.

“If you’ve ever tried to do something artistic with a relative, I would guess that 99.9 percent of the time it’s a mess,” says Jeff, who recorded for Atlantic in the late 1980s. “But for whatever reason we work really well together. I have such a high degree of respect for what he does and how he goes about what he does. He does for me too. We are able to stay out of each other’s way. That’s probably the secret to it.”

Being Jody’s first appearance on The Producer’s Chair, I asked him: “What is the best advice Jeff ever gave you about producing?”

He replied, “You need to do what the artist wants. When you say ‘producer,’ you know, we aren’t making our record. It’s the artist’s record.”

In 2014, Crash My Party received Billboard’s Top Country Album of the Year, while Cole Swindell’s single “Chillin’ It” went through the roof and has now sold 427,500 copies.

Jody performed all instruments on that track and he’s a co-writer on Cole’s current single, “Let Me See Ya Girl,” which brings us full circle back to Kill the Lights.

Not only did Jeff and Jody co-produce the album, but they both sang back-up vocals with Perry Coleman, Hillary Lindsey and Jennifer Wrinkle, they both played keyboards, they both played electric guitars along with J. T. Corenflos, Kenny Greenberg, Adam Shoenfeld, and Ilya Toshinsky. Jody also played banjo, acoustic guitar and did all the programming on the album. Now that’s what I call father-and-son teamwork, and it don’t get much cooler than that.

The Producer’s Chair: Jeff, you have said, “[Jody] brings the new school, and I bring the old school to the table.” Can you elaborate?

Jeff: Well, I tend to come at it from more of the pragmatic [perspective], sort of, “All I need is a guitar and a piece of paper,” you know? While I’ve seen him write that way, Jody comes more off-the-wall than I do. I have to wade through a bunch of ordinary stuff. With him it’s just off the cuff, different. I don’t know if that’s old school or new school or not.

I think that I can’t help but pull from artists as far back as the ‘40s, Carl Smith and Faron Young in the ‘50s, Merle Haggard, Waylon Jennings and Johnny Cash in the ‘60s and Waylon and Buck Owens in the ‘70s. I was there firsthand. So, all of that stuff goes through my brain, whereas [younger producers] don’t go to that stuff. They go to their stuff.

I bring the old-school Nashville way of tracking a band. I can’t mix something myself. I have to have a mix-down engineer to do all that. Cole Swindell’s first single – everything on there was Jody. So, we both have different talents. When it really comes to producing a vocal on somebody, I have 40 years of experience. When it comes to working inside of a track, Jody has so much more experience and is gifted with that.

The Producer’s Chair: Was co-producing with Jody something that you had in the back of your mind all along, or did the whole thing happen organically?

Jeff: I would say that it happened because he had a duo called Fast Ryde [formerly signed to Republic Nashville]. It has been said by other people—and I would say that they’re probably right—this wave of music that ended up being termed somewhere along the way ‘bro country.’ Fast Ryde was the first act to sound like that, and that is because of Jody. So, when I heard his demos, I asked if I could co-produce it with him. … I wanted to keep the rawness of it, but make it so that the average person could hear it and not be turned off by some of the raw stuff on it.

So, when we worked on that together it was pretty apparent that we worked well together. That’s been five or six years ago now. Ever since then, we both work on different things, but we both kept just getting in each other’s way, kind of. It made sense for us. You know, he’s got his own things that he produces on his own. I have to admit that I’m not producing anything on my own right now. I feel like I have to have him around. He’s got a lot of stuff going on.

The Producer’s Chair: What is your engineering and programming background?

Jody: Well, Dad bought a 4-track recorder sometime around ’92 or ’93. I was making recordings and stuff on it. I never really thought much about what I was doing. I was just kind of having fun. That’s pretty much what I do now. So, I figured I’d record on it. My dad showed me that if you recorded three tracks you could record those to another track and then have another three tracks to keep recording. You had to mix and match. There was no EQ’s or anything on those.

I didn’t just record by myself on the 4-track. I had a buddy that played drums. So, I would play the guitar and he would play drums. I would sing something on it. Most of it was probably cover songs. Some stuff I was just making up out of thin air, you know?

The Producer’s Chair: How old were you when you started?

Jody: Probably 12. Just a couple years later we bought a digital 8-track recorder that had a lot more functionality. It was a Roland VS-880. I tried to read the manual. I couldn’t really understand it. I asked Dad how to use the thing. He showed me how to turn it on, hit record, and do the tracks. It had effects. So, it was kind of cool that it had effects. There were EQs and stuff, and I didn’t even know what I was doing. So, I just turned the bright up on everything. I just turned the high end up on every track. The low end was a smiley face curve on the whole thing.

So, around 2000—the year I graduated high school—the big audio company DigiDesign made an interface called the Digi001 which went with ProTools. You could record in your house on a computer. … I think it was ProTools 5 that had 24 tracks, which was three times the tracks I had on the VS-880 plus there was waveform editing. So, you could just kind of move stuff around and put stuff in reverse—do whatever. There was lots of really cool stuff. AutoTune came out around the same time. It was fun to sing into it and hear your voice doing a bunch of wacky stuff. Dad had to buy a custom-built computer to run ProTools. It was a 700 megahertz computer.

The Producer’s Chair: What inspired you to start writing?

Jeff: If I could just interject. He would send those to me. Sometimes I would play them for his mother. I was like, “This is unbelievable.” It was the melodies. The take he had on it was like nothing I had ever heard before. I told his mother, “I don’t know what’s going to happen with him.” I’m super tough on myself and on my own songs. I’m afraid I am on everybody around me. So, when I heard some of those things at that time in his life I went, “Wow! That’s incredible.” My brain can’t even think of being able to do something like that.

The Producer’s Chair: How do you feel about artist development?

Jody: I think development is necessary in trying to figure out who the artist is and what kind of records they should be making. In many ways, I do artist development. There are some acts that I work with now. There’s a band called Backroad Anthem that I work with. They’ve been around town for about a year. We have been in the studio to record some stuff. They have shows and I come to them. Sometimes I go to rehearsals. I have another friend that I work with named David Ray. I went this past weekend to go watch him play in Iowa.

Jeff: There are artists who walk in and everything is already taken care of. They come in, they sing, and then they go fishing. They get to pick the songs, and to a degree—sometimes the songs are picked for them. But an artist’s true potential can more likely be achieved when they’re playing music that is of them—not done for them.