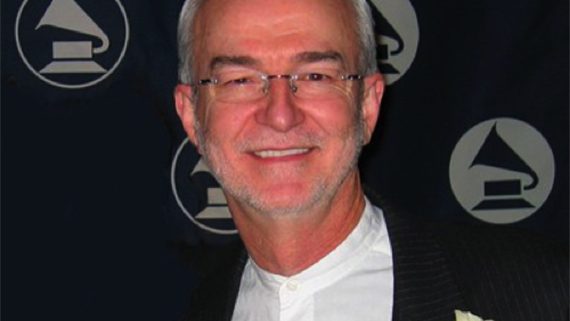 Anyone who knows anything about bluegrass, knows the name Carl Jackson. He now has songwriting, production or publishing credits on over 650 albums with over 450 cuts as a writer. His song “Little Mountain Church House,” which was the 1990 International Bluegrass Music Association Song of the Year, has been recorded by over 100 artists. According to Bluegrass Unlimited magazine, Carl has written eight of the top bluegrass songs of all time.

He won his first Grammy in 1992, for his album with John Starling entitled Spring Training. A few months later he received a Dove Award for Southern Gospel Song of the Year,“Where Shadows Never Fall,” recorded by Glen Campbell. The beautiful ballad,“No Future In The Past,” by Vince Gill was a huge songwriting success for Carl and was named the No. 1 Country Song of the Year for 1993 by Radio & Records magazine.

Carl’s second Grammy was for the 2003 Country Album of the Year, Livin’, Lovin’, Losin’ – Songs of The Louvin Brothers. “How’s The World Treating You,” an incredible duet from the album, featuring James Taylor and Alison Krauss also won the 2003 Grammy for Vocal Collaboration of the Year, for which Jackson received a Grammy certificate.

Carl has 5 IBMA Awards, 3 ASCAP Awards, and an International TV Programming Award. He’s a Mississippi Musicians Hall of Famer and an SPBGMA Preservation Hall of Greats inductee. He won SPBGMA Songwriter of the Year twice.

For the past two-and-a-half years, Jackson has been engrossed in his latest project that was released on May 12, titled Orthophonic Joy: The 1927 Bristol Sessions Revisited. The project involves a multi-artist, star-studded tribute to the “Big Bang of Country Music” that happened in Bristol, Tenn. during the summer of 1927. The state of Mississippi honored Carl with an official Country Music Trail Marker in his hometown of Louisville, Mississippi.

The Producer’s Chair: What have you been doing since our last interview in 2012?

Carl Jackson: I play every Monday night at The Station Inn with Larry Cordle and Val Storey, along with Aubrey Haynie on fiddle, Catherine Marx on keyboards, Doug Jernigan on steel guitar, Mike Bub on bass and Larry Atamanuik on drums.

The Orthophonic Joy project has taken my time completely for the past two and a half years.

I’ve worked with Dolly and with Brad Paisley. Doyle Lawson & Quicksilver, Rhonda Vincent, Nu-Blue and The Trinity River Band have recorded my songs. I’ve got another Bradley Walker project basically in the can. I’m working on a Joey + Rory gospel project.

Did you come up with the idea of Orthophonic Joy, or was it brought to you?

Rusty Morrell brought the idea to me. He’s a native of Bristol. It was kind of a dream of his to do something to honor the Bristol Sessions. He was very familiar with the Louvin Brothers project that I did years ago and the Mark Twain project.

Rusty and I have known each other for a long time—over 20 years. It made me feel really good that he trusted me with the idea. He told me, “If you take this on I know it will get done right. If you agree to do it. I’ll come up with the funding.” We both approached the State of Tennessee and then the State of Virginia also came onboard to help fund the project. Then we were able to land distribution through Sony Legacy.

Where does one begin, on a project of this magnitude?

There’s a lot of prep work. You start making phone calls to people that you want to take part in the project. So, the first calls I made were to Vince, Marty Stuart, Emmylou, Dolly—artists like them that are my close friends. They certainly know and love the history of the music.

Then you branch off and you get superb artists like my dear friends, Brad Paisley, Sheryl Crow, etc. I try to mix things up a lot when I do these things—I have some country artists on this one. I’ve got some pop artists like Sheryl. Keb’ Mo’ is on there. There’s a wide variety—plus some new artists. I always try to include some new artists that deserve recognition.

As far as new artists, I added The Shotgun Rubies, a group I put together made up of Val Storey, Delnora Reed, and Dani Flowers. There are The Church Sisters who are phenomenal singers. They’re an ancient 19 years old. And a new kid named Corbin Hayslett. Corbin is the winner of our contest. We had a contest similar to what Ralph Peer did in 1927, when he put the ad in the paper and asked people to come to Bristol to show up to audition. We did a Facebook campaign.

Originally there were 76 tracks recorded during the Bristol Sessions. How did you decide what songs were going to be on the new project?

I went through the box set of the Bristol Sessions more than once. I picked out probably my 25-30 favorites. And as I started bringing the artists on board I would usually have two or three tracks in mind that I felt would be best for them. It was kind of like the Louvin Brothers Project. It just fell into place.

Who are the musicians on the album?

Who engineered the project?

The tracks were recorded by John ‘Hip Hop’ Caldwell. And Luke Wooten did mixing and mastering for me, as always.

Where did you record the album?

I recorded the vast majority of it at Station West, Luke’s studio over in Berry Hill. There were a couple of things that were done outside of there. I did Sheryl’s vocals at her place. I did Vince’s vocals over at his house. Brad’s guitar and vocal parts were done at his house.

Does the album, in some fashion, pay tribute to Ralph Peer?

There are 37 tracks on this 2-CD set, but 18 of them are music and 19 of them are narrations. My narrator is Eddie Stubbs and the script was written by Dr. Cindy Lovell who is the director of the Mark Twain Home and Museum in Hartford, Connecticut. It’s a beautiful script, and Eddie was the perfect voice to tell the story. And, yes, we tell the entire story. Pop Stoneman finally gets the credit he deserves for encouraging Ralph Peer to come to Bristol in the first place. Pop Stoneman is really a lot more behind the whole Bristol Sessions than people realize. He was already a big star in 1927.

Is there was one magic moment that stands out during the project?

Do I have to pick one?! There were many. I love the song “The Storms Are On The Ocean.” It’s one of my favorite songs that was recorded back in ’27 on the Sessions. Written long before then, I’m sure. That was my favorite one, so I was holding it back for Dolly. She liked it a lot, of course, but then she asked me to play her some more things just to see what else I had in mind. I played her “When They Ring Those Golden Bells.” And she immediately said, “That’s the one I want to do. I’ve been singing that since I was a little girl.” So that was a really neat moment, a bit of divine intervention.

I wanted Keb’ Mo’ on the project, but he was one of the few artists that I didn’t know. But my engineer John Caldwell knew him and picked up the phone and called Keb. We were in the studio at Station West, and when he called Keb was one block away carrying one of his guitars over to Joe Glaser. And Keb came straight to the studio and we recorded “To The Work.” And I had never met him before. He was a super nice guy and great player. And so that was another bit of divine intervention.

Keb had a young boy with him who was a protégé of his. He was even named after him. His name was Keb Hutchings McMahon. He calls himself ‘Keb’ H’ Mac’. While Keb and I were talking about what we were going to do on the record, he looked over at me and said, “It might be a good idea to let little Keb play on here, too.” I had heard little Keb and he was good, so we wound up putting little Keb on his first ever recording with Keb’ Mo’ doing “To The Work.” That was a special thing that I was able to give to somebody. Corbin Hayslett winning the contest and being on the project was another. Corbin is a great guy, and he’s an old soul. He’s 21 years old, but if he’d been born in 1927 he’d have been bigger than Babe Ruth. Babe hit 60 homeruns in 1927. That’s pretty big.

Are any of the descendants of any of the original artists on the project?

At 85 years old it’s really cool to have Jesse McReynolds on it and playing his granddaddy’s fiddle which was played on the original 1927 sessions. Charles McReynolds played the fiddle that Jesse is playing. In 1927 Charles played it on the original session in a group called The Bull Mountain Moonshiners, I believe. Jesse has recorded Johnny Goodwin and “The Girl I Left Behind” with just me and him standing in the studio with just guitar and fiddle and then also talking about it. And there’s also Jimmy Edmonds, whose granddaddy Norman Edmonds played on the original sessions. Jimmy is part of The Virginia Luthiers. They’re on the record, too, doing “Train On The Island” with Larry Cordle.

How about the musical arrangements—did you do all of them?

I did them all. There’s a couple of cases, like in Corbin’s case. Corbin sent his video for the contest of him doing “Darling Cora”with just him and a clawhammer banjo. It absolutely smoked off the screen. So, I cut Corbin live with a bass. It’s Corbin Hayslett along with Dennis Crouch playing bass, and its Corbin’s arrangement.

I gave Doyle Lawson the arrangement on “I’m Redeemed.” It’s the opening track. It was originally done by the AlcoaQuartet. It’s an old traditional hymn. Doyle went in and did it with his group. So, in other words, there are a few things. “Sweet Heaven When I Die”—Steve Martin and The Steel Canyon Rangers—we all basically arranged that together. But most of them I’m the arranger on.

Has anyone presented the thought of a documentary or a movie about the Bristol Sessions?

We’re doing it. It’s already in the works! We’ve got tons of footage from the project that is being put together that we hoped would be out at the same time to release in a package. I hope there will be a package that contains everything at some point. But the documentary is to follow, yes.

Is there a possibility that there might be a tour or a concert of some sort?

Yes, there is. We actually opened in Galax, Virginia last weekend. We did two days with about 10 of the artists off of the CD. There is talk of doing some things. We are going to do Larry’s Country Diner. On June 2, we’re doing Marty Stuart’s Late Night Jam and yes, there is talk of doing a theatre run or something like that. It’s a really cool thing for stage.