The event was hosted by Brenda Lee. Joshua Martin speaks on behalf of his father, Grady Martin, who was announced as the newest inductee into the Country Music Hall of Fame in the “Recording and/or Touring Musician Active Prior to 1980” category. Photo: Alan Poizner / CMA

Guitarist Grady Martin was part of Nashville’s A-Team, which helped define Nashville music during the Nashville Sound era. Martin will be inducted in the Musician category. By the age of 20, he had appeared on his first recording session, joined the Opry house band, and already hit the road several times. Over the next decade he would become one of Country Music’s most sought after live performers and held positions in the bands of western swing star Paul Howard, the Bailes Brothers, Little Jimmy Dickens, and led Red Foley’s band on ABC-TV’s “Ozark Jubilee.” The Veteran Era inductees this year are Jim Ed Brown and The Browns. Jim Ed and sisters Maxine and Bonnie rose to fame in the 1950s. Their song “Looking Back to See” became a No. 8 hit on Billboard‘s Country chart. They signed with RCA Records in 1955, working with Chet Atkins, and recording 250 sides for the label. The 1959 song “The Three Bells” topped the pop and Country charts, and rose to No. 10 on the R&B charts. The success of “The Three Bells” and following hits like “The Old Lamplighter” earned them performances on The Ed Sullivan Show, American Bandstand, and The Perry Como Show. They joined the Grand Ole Opry in 1963, and disbanded in 1967 when Maxine and Bonnie chose to retire to raise their families. Jim Ed Brown and The Browns (Maxine, left, and Bonnie) are announced as the newest inductees into the Country Music Hall of Fame in the “Veterans Era Artist” category. Photo: Alan Poizner / CMA

“This is an honor. I can’t wait to see our picture hanging up here in bronze,” said Bonnie.

“This is one of the biggest thrills I’ve had in my life,” said Maxine. “We never stopped dreaming the dream. We endured all those hardships because of our love of country music and our love of the artists. A hit record and awards don’t mean very much. They last about a year, but this award from the CMA will last a lifetime and we’re so proud of this.” Modern Era category inductees for 2015 are The Oak Ridge Boys. They earned their first No. 1 in 1978, and have sung harmonies for Johnny Cash, Leon Russell, Bill Monroe, and others. Their biggest hit came in 1981 with “Elvira,” followed by “Bobby Sue,” and “Trying To Love Two Women,” “Beautiful You,” “Fancy Free,” “Make My Life With You,” and others. “American Made” became a classic ad jingle.

They have released 40 albums, and sold in excess of 41 million copies.

“Thank you for deeming us worthy of the most prestigious honor to be bestowed on the Oak Ridge Boys,” said Joe Bonsall. “Thank you for your love and support.”

They thanked longtime manager, Jim Halsey, who they called “our godfather.”

“I’m not turning in my singing britches until we see how that goes,” said William Lee Golden. “Thank you, it’s been a great ride and hopefully it’s not nearly over.”

The inductions will take place during a medallion ceremony to be held later this year. With that induction, the Country Music Hall of Fame will have 127 members. DISClaimer: A Stack Of Worthy Work 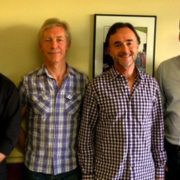