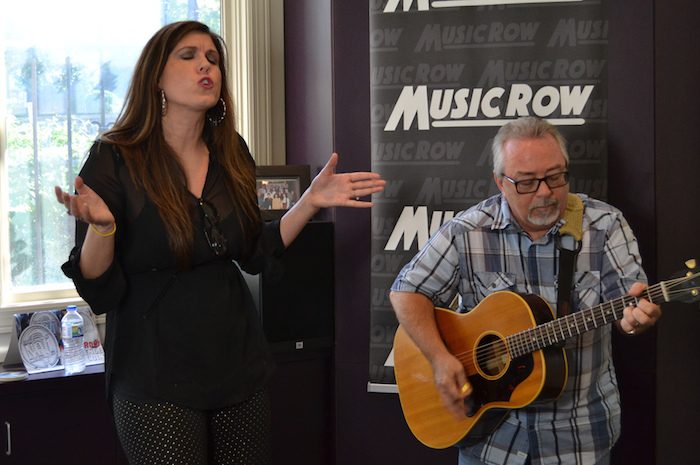 Greenville, S.C. resident and SkyTone Records artist Morgan Riley visited the MusicRow office to share songs from her upcoming 12-song project, Collage. “It’s a mixture of everything from country-pop to rock to soul,” says Riley. She offered acoustic takes on three songs from the album, including “Don’t Ask Me,” the ballad “It Wasn’t Me,” and up-tempo “Down South.”
A life-long entertainer, Riley moved to New York City at 18, and soon found herself performing pop and R&B standards, and recording at Hit Factory Studio. After re-discovering her Country roots, she moved to Greenville to begin sharpening her songwriting skills.
After answering a open call for aspiring artists on musicxray.com, Riley traveled to Nashville to begin networking. Her previous album, Affinity, caught the attention of SkyTone Records’ Frank Green. Green soon signed her to his label, and became a frequent co-writer. The duo’s co-writes are featured heavily on Collage. Riley makes frequent trips to Nashville for business and songwriting.
Riley recently released the video for her single, “Rowdy Shoutin’ Cowboys,” which was shot in Nashville. The project will release on Skytone Records on Sept. 30.
[slide]