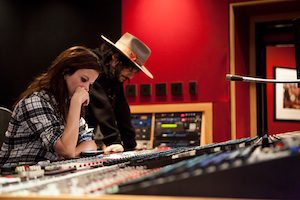 Martina McBride in the studio with producer Don Was.

Martina McBride is set to release her new album, Everlasting, out March 4, 2014, on her own label through Kobalt Label Services. MusicRow has confirmed that the singer is no longer a Republic Nashville artist; she joined Republic Nashville in 2010.
The project, produced by Don Was, finds the singer covering songs from an array of musical genres, and includes her renditions of the songs “Do Right Woman, Do Right Man” (Aretha Franklin), “If You Don’t Know Me By Now” (Harold Melvin & The Blue Notes) and the Jimmy Ruffin song “What Becomes of the Brokenhearted.”
The project was recorded at Nashville’s Blackbird Studios. Everlasting also features a collaboration with Gavin DeGraw on “Bring It On Home To Me,” originally performed by Sam Cooke.  A full track listing for Everlasting will be released in the coming weeks.
McBride recently wrapped her Joy of Christmas Tour with a performance at Nashville’s Ryman Auditorium. The singer will hit the road in 2014 to join reigning CMA Entertainer of the Year George Strait on his last tour.