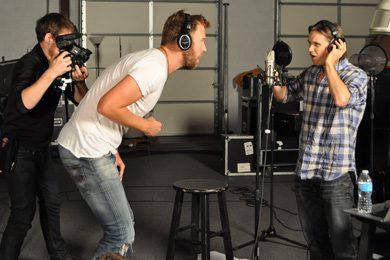 Commenting on “More Than the Stars,” recent ASCAP Foundation Champion Award honoree Ne-Yo said: “It’s really special for me to be a part of something that speaks so heavily to the art of songwriting and what it does to people… a kind of ‘We Are the World’ for songwriters. The song came out fantastic. The film came out fantastic. And I was happy to be a part of it.”
“More Than the Stars” will join the Why We Create Music film, both directed by Already Alive filmmaker and co-founder Michael Marantz. Ascap.com also features an interactive timeline that is revealing 100 Years of ASCAP’s history, one day at a time.
Featured in the song and music video are:
Aloe Blacc, soul singer-songwriter behind “I Need a Dollar” and Avicii’s international hit “Wake Me Up”
Claudia Brant, Latin Grammy-winning songwriter for Song of the Year
Carter Burwell, Oscar-nominated film composer renowned for scoring The Coen Brothers films
Amy Grant, Grammy and Dove Award-winning and all-time best-selling contemporary Christian singer-songwriter
Josh Kear, four-time Grammy-winning country pop songwriter, including Song of the Year, and 2013 ASCAP Country Music Songwriter of the Year and Song of the Year winner
Savan Kotecha, hit pop songwriter for Britney Spears, Usher, One Direction and Maroon 5, as well as vocal producer on The X Factor
David Lang, Pulitzer Prize-winning concert music composer and Bang on a Can co-founder
Lady Antebellum‘s Charles Kelley and Dave Haywood, seven-time Grammy-winning country pop singer-songwriters and Song and Record of the Year winners
Bear McCreary, Emmy-winning composer known for his work on The Walking Dead
Ne-Yo, three-time Grammy-winning R&B singer-songwriter
Stargate, Grammy-winning record producing and songwriting duo behind pop hits for Ne-Yo, Beyoncé, Katy Perry, Rihanna and others
Dan Wilson, Grammy-winning singer-songwriter-producer of Adele’s “Someone Like You” and “Closing Time” with his band Semisonic
Bill Withers, Grammy-winning R&B singer-songwriter of “Lean on Me,” “Ain’t No Sunshine” and “Just the Two of Us”
Watch the video below.