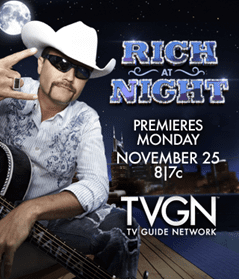 John Rich is adding talk show host to his resume’ next week when his new show, Rich At Night, premieres on Nov. 25 on the TV Guide Network (TVGN). Among the special guests lined up to appear on the new show are Wynonna, Kix Brooks, Wayne Brady, John Ratzenberger, and former fellow Muzik Mafia member Gretchen Wilson.
Rich is joined by co-host Aussie actress/singer Sophie Monk on the show, which features Rich’s Nashville home, along with various bars around the city. He’s appearing on Fox & Friends and Today this morning (Nov. 19) to promote the show, and will guest on Late Night With Jimmy Fallon tonight at 12:35 ET.
As one half of the well-known country duo Big & Rich, Rich is no stranger to TV, having spent weeks on the 11th season of the Celebrity Apprentice, where he was named winner of the competition and raised over 1.4 million for St. Jude Children’s Research Hospital.
For a sneak peak of Monday night’s show click here: http://tinyurl.com/oh72369.