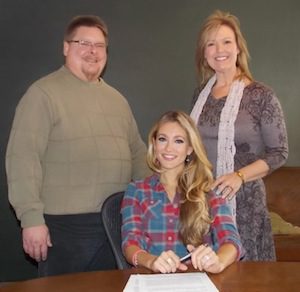 Whitney Duncan has signed a publishing deal with Given Music Publishing. Duncan has collaborated with songwriters including Hillary Lindsey, Gordie Sampson, Chris Tompkins, and Kara DioGuardi, and her songs have been recorded by numerous artists including Danielle Bradbery.
“Whitney is a proven and professional writer as well as a ‘Survivor,’ and I very much look forward to working with her,” said Given Music’s VP/GM Mike Sebastian. “She is a talented, gifted writer and a wonderful person, and she brings a lot to the Given Music Publishing team.”
She appeared on season 23 of Survivor: South Pacific  in 2011, where she lasted 28 days in the jungle of Samoa. She recently cut new sides with producers Dave Haywood of Lady Antebellum and Paul Worley, and will be releasing new music in 2014.