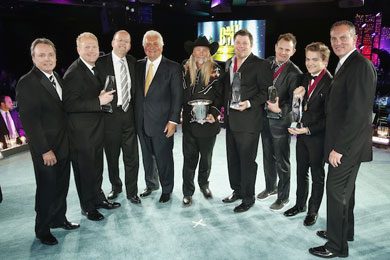 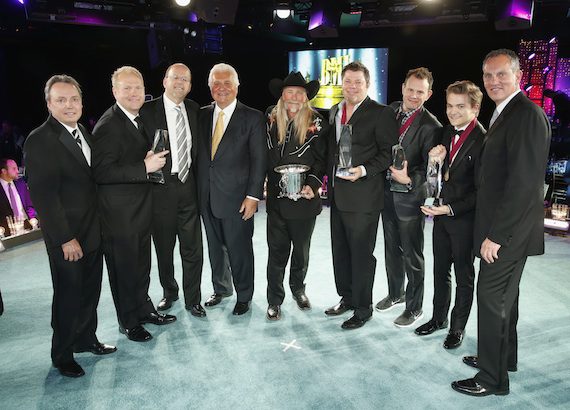 The event is called the BMI Country Awards, but nowadays it has less to do with presenting accolades and more to do with being a giant par-tay.
BMI executive Clay Bradley even dubbed it such. “This is the greatest party in country music,” he said. And it is.
On Tuesday evening (Nov. 5) at BMI’s Music Row headquarters, a throng of country publishers and songwriters schmoozed continuously from 5:45 p.m. to 9:00 p.m., when the actual award presentations began.
The schmoozers paid attention to the awarded songwriters for roughly an hour before resuming their schmoozing until 11:00 p.m. Indeed, their noise level nearly drowned out the night’s biggest winners. The schmooze brigade then left the awards banquet and descended to the building’s lobby for desserts, more schmoozing and music by the Harold Bradley A-Team Band with Mandy Barnett. This went on into the night.
One explanation for this orgy of socializing is the fact that there is annually no greater concentration of country stars and their teams at one gala. So many hands to shake, backs to slap and contacts to be made, you know.
“Is there anyone here?” asked Bob Doyle as he arrived on the red carpet. I directed him to the cocktail-party lobby. “Just throw a rock in there: you’re bound to hit a star,” I advised.
I wasn’t kidding. Chris Young, Florida Georgia Line, Miranda Lambert, Brantley Gilbert, Gregg Allman, Larry Gatlin, Clay Walker, Eric Church, The Eli Young Band, Greg Bates, J.T. Hodges, Kip Moore, Will Hoge, Keith Urban, Thomas Rhett and Toby Keith merely scratched the surface of the recording celebs in attendance.
Need more proof? Nashville TV series stars Sam Palladio and Charles Esten, Kix Brooks, Dustin Lynch, The Del McCoury Band, Lee Brice, Justin Moore, Dickey Lee, Paul Overstreet, the Duck Dynasty Robertson family members, Kacey Musgraves, Chris Jansen, The Henningsens, Josh Turner, Jake Owen, Gary Allan, Rory Feek, Rascal Flatts members, Andy Gibson and Jason Aldean were there, too.
Several of them were fashion faves. Ashley Monroe was a knockout in a gown with a strapless green suede bodice, a navy leather skirt and belt, a silver jeweled cuff and matching sparkly high-heeled pumps, accessorized by her handsome new groom, Chicago White Sox pitcher John Danks. Kimberly Perry of The Band Perry was in a stunning floral long-sleeved cocktail dress with white collar and cuffs. 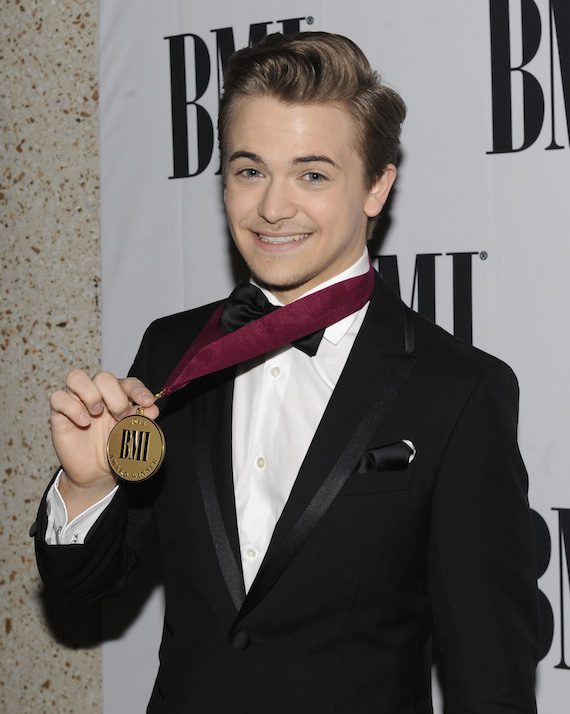 Several of the stars came to sing. To salute this year’s BMI Icon award winner Dean Dillon, lanky Luke Bryan began with a lively performance of “Down and Out.” Lee Ann Womack followed with a divinely soulful “Empty Glass.” She drew a standing ovation, as did Kenny Chesney’s version of “Holed Up in Some Honky Tonk.”
The Dillon tribute concluded with George Strait’s medley of the songwriter’s “Marina Del Ray,” “The Chair” (another s.o.) and “Here for a Good Time.” Strait has recorded 54 Dillon songs over the years. Which is, like, wow. “Congratulations, Icon!” King George exclaimed.
“When Del [Bryant] called me [to tell the Icon Award news], I started to cry, and I’ll tell you why,” said Dillon. “I live, eat, breathe and sleep songs….In the immortal words of Hank Cochran, ‘Isn’t this wonderful?’” Dean Dillon has an incredible 26 BMI songs that have been broadcast more than a million times apiece.
While we’re on the subject of the awards, themselves, Jody Williams, Del Bryant and incoming BMI president Michael O’Neill teamed up to present the Big Three. Del did the honors for the first one: The BMI Country Publisher of the Year was Sony-ATV. This is the 37th (!) time the firm has accomplished this feat.
The Songwriter of the Year was Rodney Clawson. “It’s a pleasure to sit in a room and write with the greatest songwriters in the world, every day,” said Clawson. “Thank you for believing in me. This is awesome.”
The Frances W. Preston Song of the Year went to “Wanted,” co-written by yet another singing star in attendance, Hunter Hayes, with his collaborator Troy Verges.
On either side of the Icon presentation, BMI honored its 2013 most-performed songs. The first 25 were announced before, and the second 25 were honored after.
“What an incredible year we’ve had,” said Jody. “There’s more interest in our music and our lifestyle than ever before. And the best thing is, your songs will live forever.” 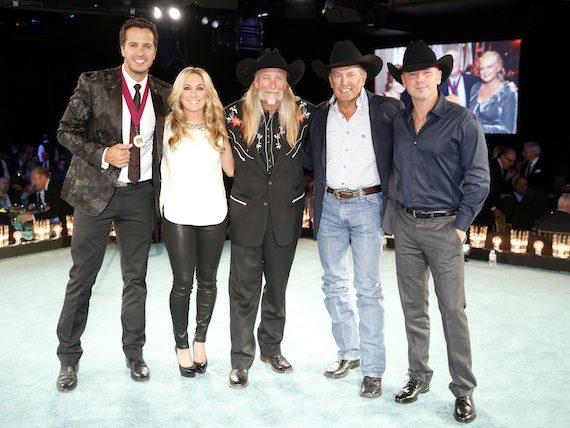 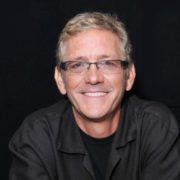 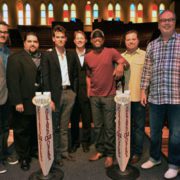 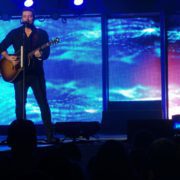 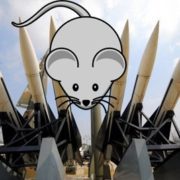