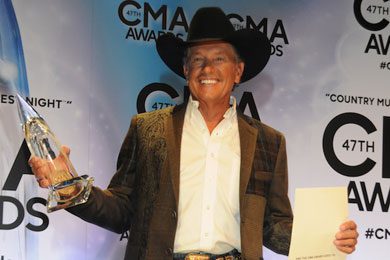 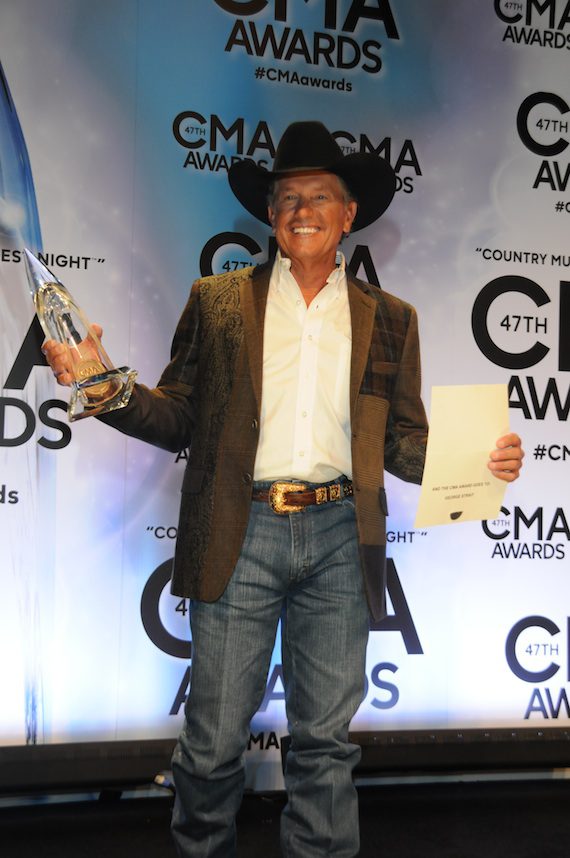 This is a very good week to be George Strait.

The 6,000 voters of the Country Music Association have spoken, and on Wednesday night (Nov. 6), they proclaimed Strait their Entertainer of the Year. On Monday (Nov. 4), he won ASCAP’s Founders Award, and on Tuesday (Nov. 5), he was in the spotlight for BMI’s salute to his chief songwriter, Dean Dillon.
“What? Never in a million years. Wow,” Strait blurted when his name was announced at the CMA Awards. “This blows me away. I cannot believe this. I’m just blown away to even be nominated again. Thank you so much. This means the world to me.
“Obviously, I didn’t prepare anything to say,” he added backstage. “I’m looking forward to my last year [on the road] next year.”
The only other person to win Entertainer of the Year after being inducted into the Country Music Hall of Fame is the late Eddy Arnold. At age 61, Strait is the oldest person ever to win Entertainer.
Blake Shelton and Miranda Lambert repeated as Male and Female vocalists, both for the fourth time. Little Big Town scored its second consecutive Group of the Year win. Mac McAnally won his sixth Instrumentalist CMA prize.
But the show also held a few surprises. The CMA voters showed real class in voting for Kacey Musgraves as Best New Artist over the more successful Florida Georgia Line.
“This first year for me has been just indescribable,” said Musgraves. “My grandma is in the audience tonight. She was my first booking agent. I feel so grateful.”
Another artistic, classy choice was “I Drive Your Truck” as Song of the Year over the commercial blockbuster “Cruise.” That selection was marred by a breach of award-show etiquette. Singer Lee Brice commandeered the mic even though he is not the song’s author. Then songwriter Jimmy Yeary took over. There was no time left for his co-writers Connie Harrington and Jessi Alexander to speak.
On the other hand, the classiest acceptance speech was Lambert’s. She was the only winner to recognize and praise her fellow Female Vocalist nominees. That’s probably a reflection of how aware country’s women are of their precarious status.
As expected, Florida Georgia Line won Duo and Single of the Year. Shelton (and producer Scott Hendricks) took home Album of the Year. The third double winner was “Highway Don’t Care,” which won Video and Musical Event awards for Tim McGraw, Taylor Swift and Keith Urban, plus video director Shane Drake.
Swift was also given the CMA Pinnacle Award. After being serenaded by Lennon & Maisy’s winsome “You Belong with Me,” she accepted her honor from presenters Urban, Strait, McGraw, Brad Paisley, Faith Hill and Rascal Flatts. All of them took her on the road as an opening act when she was a teenager.
“I didn’t know this was going to be all this,” said Swift to her mentors. “You guys all got up here and did this. I love you. You’ve made me feel so special.” Backstage, she and Hill both shed happy tears when Strait was announced as the night’s big winner.
The show had a number of musical high points. Lady Antebellum was rousing with the instantly catchy “Compass.” Florida Georgia Line was drawling and thumping on “Round Here.” One of the night’s best vocals was Shelton’s on “Mine Would Be You.” The Zac Brown Band teamed up with the furiously drumming Dave Grohl for their ultra cool, multi-layered “Dance Among the Living.” Little Big Town was audio-lovely and harmonically flawless on “Sober.”
Urban and Lambert teamed up for “We Were Us.” They had admirable energy and passion, but seemed somewhat vocally muffled. Hunter Hayes and Jason Mraz also had shaky audio on “Everybody’s Got Somebody But Me.”
A standing ovation greeted Swift after her acoustic performance of “Red” with Vince Gill, Alison Krauss, Sam Bush, Eric Darken and Edgar Meyer. Other standing ovations went to Eric Church’s moody, rocking, pyro-accented “Outsiders” and to Strait and Alan Jackson for their “He Stopped Loving Her Today” salute to the late George Jones.
Mugraves was adorable on the super witty “Follow Your Arrow,” which also received a huge ovation. The telecast bleeped out the word “joint” in her song, but left in “crack,” “hell” and “damned.” Go figure. 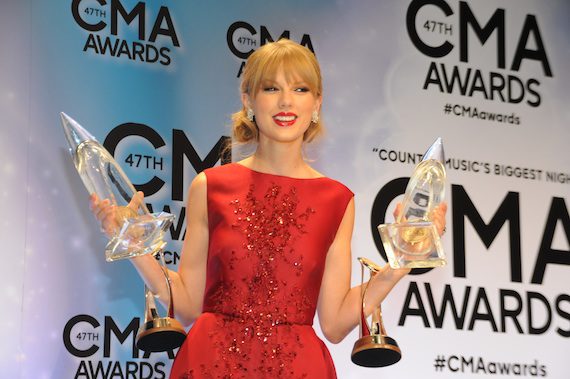 Bryan was the hardest working man in show business on Wednesday. He was up at the crack of dawn to sing for host Robin Roberts on Good Morning America and was still game to open the CMA Awards with “That’s My Kind of Night.” He said he tried to nap in between, but couldn’t. Throngs of happy fans cheered him on, downtown in front of the Bridgestone Arena, during his a.m. romp. The GMA telecast is also where the “Highway Don’t Care” award wins for Musical Event of the Year and Video of the Year were announced.
Also prior to the telecast, the CMA’s international awards were given to Jeff Walker, the BBC’s Bob Harris and Swift (for the second time). Thompson Square hosted pre-telecast honors for Musician of the Year and radio winners.
Speaking of the latter, why do we waste network television time by showing and announcing the radio winners? Terrestrial radio is only one of the delivery systems for music. Why not recognize cable TV, print journalists, the internet’s many platforms and/or satellite radio during the telecast?
The CMA Awards Show was co-hosted by Carrie Underwood and Brad Paisley, who also performed. These two become more amusing each time they host. Their opening bit included ditties about musical feuds, Obamacare and twerking, aided by Kellie Pickler and the Duck Dynasty Robertson family.
Later in the show, Paisley presented Underwood with an oversized foam-fangs “finger” that fans wave for the Nashville Predators ice hockey team. “Go Preds!” said Underwood as she waved it (she is married to the team’s Mike Fisher). “I don’t think Miley done it that way,” Paisley cracked. 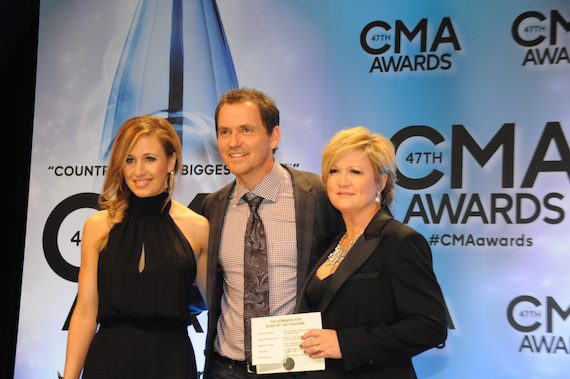 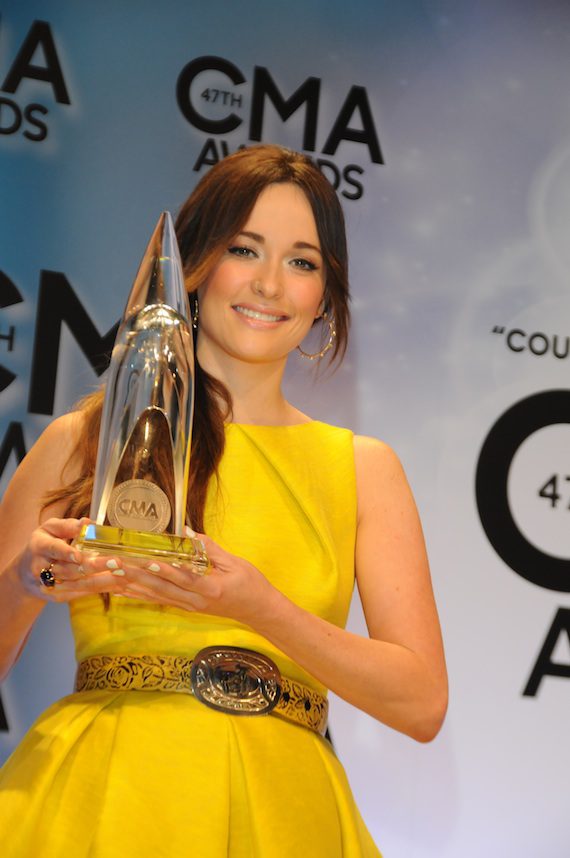 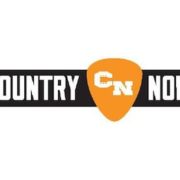 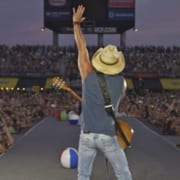 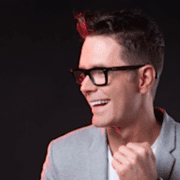 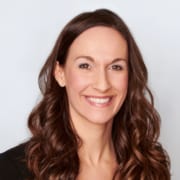