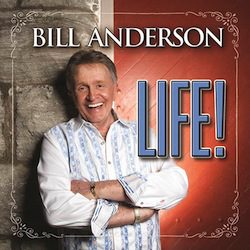 Bill Anderson has teamed up with some special guests for his upcoming new CD, Life, available digitally Nov. 12 on Red River Records. Willie Nelson, John Anderson, Vince Gill, Joey+Rory, and Dailey & Vincent all make appearances on the new CD, which will also be in stores Marh 4.
A prolific songwriter who continues to garner cuts and have radio hits, Anderson penned songs with Brad Paisley, Jamey Johnson, Jon Randall, (with whom he co-wrote “Whiskey Lullaby”), Buddy Cannon and many other renowned writers for the new project.