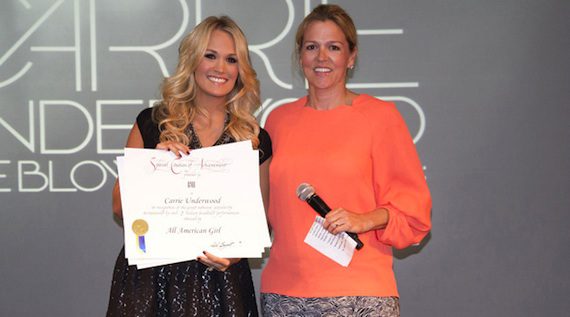 Carrie Underwood became a different kind of millionaire recently when BMI awarded her with their coveted “Million-Air” awards for songs reaching the one millionth play mark. At a reception at the Country Music Hall of Fame, Underwood received certificates for the one million performance achievements of “Mama’s Song” and “Good Girl,” and a separate award for “All-American Girl,” which has logged a staggering two million airs to date. The three tracks honored at the reception alone played back-to-back would total nearly 23 years of continuous play.
“With a catalog boasting more than 13 million performances, Carrie has become one of the most successful songwriters in country music today,” said BMI’s Vice President of Writer/Publisher Relations Jody Williams. “We at BMI could not be more proud and are excited to celebrate these continued incredible achievements with her,” said Williams.
Awarded to songwriters, composers and publishers whose songs accumulate over one million U.S. broadcast performances, the designation has been bestowed upon many revered songwriters, including Paul McCartney, Dolly Parton, and Roy Orbison. BMI Nashville presented the last “Million-Air” Awards earlier this year to songwriter Scotty Emerick to recognize his hits “I Love This Bar,” “Beer for My Horses,” “As Good As I Once Was” and “Big Blue Note.”