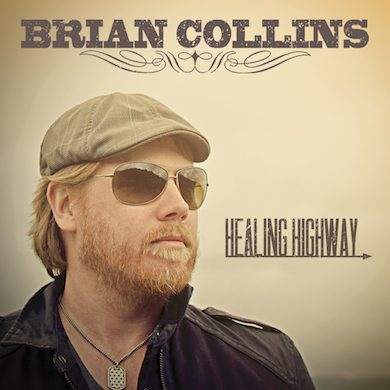 Hailing from the music hotbed of West Georgia, Brian Collins radiates a true southern soul. Humbled by his modest upbringing as the son of two truck-driving parents, Brian exudes passion and love in every corner of his career. The highly anticipated release of his album, “Healing Highway” is set for October with the lead-off single “Never Really Left” hitting radio airwaves in August.
Over the course of his career, Brian has worn many hats in the industry. Not only is he a top notch singer/songwriter and artist, but Brian has also been praised for his talents as a producer, engineer and graphic designer. Brian co-wrote every song on the new album and produced it alongside Mills Logan and Kenny Greenberg.
“I am very proud of this project,” said Brian. “We worked hard to write, record and produce material that captivates me as an artist and person… I think we nailed it.”
Inspiration for Brian’s songwriting comes from many different aspects of his life. In 1985, Brian’s younger sister, Karen Collins, passed away from Leukemia. Brian used his creative and artistic ability to heal the wounds of his family’s tragedy through a song he co-wrote with close friend and Zac Brown Band bass player, John Driskell Hopkins, titled “She Will Ride.” In January of 2013, Karen’s memory became an anthem to find a cure for cancer through the launch of the She Will Ride Foundation. The non-profit, founded by Brian and Blue Light Entertainment, aims at contributing financially to the determination of finding a cure for cancer and leukemia in this generation
Take a cross between Eli Young Band, Bob Seger, Bruce Springsteen, and Marc Broussard—and you have a sound unlike any other—you have something unique. And uniqueness describes Brian in every sense of the word. His honest lyrics capture the heart of every listener while the soulful quality of his voice gives meaningful expression to songs that bend the lines between Country and soul.
Brian’s hard working nature and undeniable talent has led him to share the stage with KISS, Will Hoge, Sister Hazel, James Otto, Colin Hay (of Men At Work), Zac Brown Band, the Smithereens, Marshall Tucker Band, Georgia Satellites, Edwin McCain, Blackberry Smoke, Alabama, Lynyrd Skynyrd and more. The depth of his songwriting and the magnitude of his perspective attest to Brian’s broad appeal and ever-growing fan base, which has led him to play over 150 dates a year.
A Brian Collins show offers a well-rounded, dynamic live performance that engulfs the senses and takes audiences on a notable journey. Most recently he had the privilege of playing on the Alabama & Friends Cruise and is on the bill for The Rock Boat 2015 cruise with Sister Hazel, The Bare Naked Ladies and Michael Franti & the Spearhead.
In 2005, Brian launched “Blue Light Studio” Not only did Brian make his vision of the company into a reality, but he also personally designed all of the recording rooms where he produced/engineered albums and tracks for hard rockers Skid Row, Tony Lucca, The Luchagores, Atlanta based rap artists T.I., Twista and Frank White, as well as acoustic rockers Nic Cowan and Tim O’Donovan. In 2013 Brian partnered with manager and music business developer Santos Vasquez and Belmont graduate Tommy Smith and formed the LLC “Blue Light Entertainment” a booking and publishing company. Since the launch, they have seen National fan recognition through touring and organized the BC Brigade (Brian’s Fan Club).