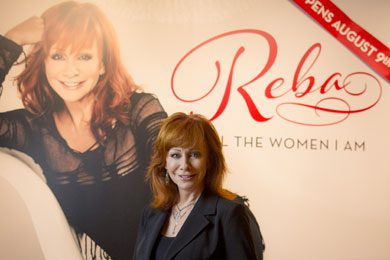 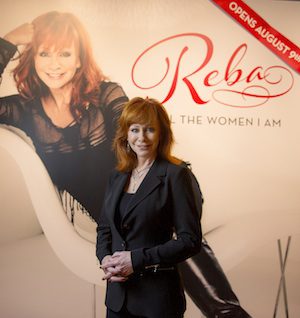 That’s because I save everything, myself. But as of Wednesday evening (Aug. 7), I am officially taking a backseat to Reba McEntire. I mean, the woman still has certificates and report cards from grade school, for crying out loud. Not to mention every dress she’s ever worn.
All this and more was revealed at the opening party for her Country Music Hall of Fame exhibit, “Reba: All the Women I Am.” You’ll flip at the splendor and the detail of this display. And she plans to add more and different items during its run. I hope she doesn’t swap out the Reba “Barbie” doll or the Reba lunchbox, both of which are currently in one glass case. And both of which I covet.
“It gives me a great feeling to know that y’all came out to see all the stuff I’ve saved over the years,” said the superstar to the opening-night party crowd. “I’m a pack rat. Just like my Momma.”
The exhibit includes mementos from Reba’s film and TV career, awards statuettes, vintage family photos, leather boots and cowgirl competition ribbons. A large video screen shows historic footage from her life.
“This must be like an ‘old home week’ to you,” I said to Sandi Spika Borchetta, who designed many of Reba’s most fabulous gowns in 1987-2001. Many of the ultra deluxe ones are on mannequins in the cases. They include the infamous, spangled, sheer-bodice, plunging neckline red number worn at the 1993 CMA Awards.
Costumer Sandi has also designed several of the eye-popping outfits worn by Taylor Swift. The designer’s date to the party was hubby Scott Borchetta, who is Taylor’s label guru.
Other power couples at the soiree included Dwight Wiles & Diana Johnson, David & Karen Conrad, Ray & Polly (Roper) Edenton and Kitty Moon & Pat Emery, not to mention Reba and her husband/manager Narvel Blackstock. They mingled with such uber fabulons as Gary Overton, Rod Essig, Tony Brown, Jo Walker-Meador, Kye Fleming, James Stroud, Harold Bradley, John Huie and Nancy Jones (who reports that a George Jones exhibit at the Hall of Fame is under discussion).
Following cocktails, we repaired to the Ford Theatre for the welcoming presentation. CMHoF chief Kyle Young greeted the standing-room-only crowd and introduced a songwriters’ salute to the copper-tressed diva.
Phillip & Amber White performed “I’m a Survivor.” In addition to being a big country hit, Phillip’s co-written song served as the theme of the long-running TV sit com Reba. “I was scared to death,” said Amber, who had to sing it in front of its originator, one of country’s most iconic vocal stylists.
Songwriter Richard Leigh talked of being orphaned and raised by four fathers and three mothers through foster and adoptive homes. The experience led to him to co-write “The Greatest Man I Never Knew,” the Reba hit he performed. The superstar rose from her front-row seat to hug the tunesmiths who provided her with these hits.
The Band Perry, Kelly Clarkson and Blake Shelton sent in congratulatory videos, which were screened for the audience. Young announced that Reba will be at the Hall on Saturday (Aug. 10) at 2:30 p.m. to be interviewed about her spectacular career by Michael McCall. Needless to say, this gig will be packed. On Sunday (8/11), the museum will air the documentary GAC’s Backstory: Reba McEntire at 2 p.m.
Upon exiting the Ford Theatre, we had the option of either immediately touring the exhibit or schmoozing and snacking in the Conservatory. We chose to start with the latter and avoided the crowd by going upstairs to tour the displays later. Hors d’oeuvres, designer salads, cheeses and pork carving stations awaited, not to mention the “Reba” cocktail (cranberry juice, orange liqueur and champagne) and the “Reba” cornbread muffins.
Working the room were Holly Bell, Hunter Kelly, Katie Gillon, Kay West, Bill Carter, Bill Denny, Bob Moore, Bob Paxman, Mike Milom, Ralph Emery, Chase Cole, Vernell Hackett, Bruce Bouton, Lon Helton, Whitney Daane, Don Light, Eric Parker, Leigh Reynolds, Kirt Webster, Sandy Knox, Jennifer Bohler, Chuck Dauphin, Barry Mazor, Victoria Shaw and Jeff Walker. Nancy cartoonist Guy Gilchrist talked of his lifelong love of songwriting. In case you haven’t noticed, the strip’s character Sluggo has become a songwriter this week.
“Thank y’all for all your love and support,” said Reba. “I hope you enjoy the exhibit….It’s just a little piece of my life, and you’re here tonight because you’re a part of it. I wouldn’t be here without you, and I wouldn’t want to be here without you.”
“Reba, we will love you forever,” responded Kyle Young. “This has been a joy…..Thank you, thank you, thank you.” 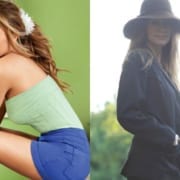 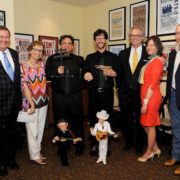 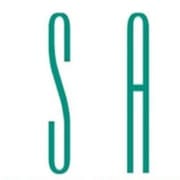