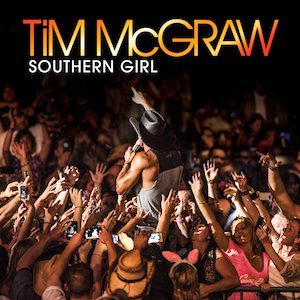 Tim McGraw has enlisted the help of country radio stations nationwide to get the word out about the release of his latest music video, “Southern Girl.” McGraw will premiere the clip on country radio station websites nationwide, simultaneously starting at 4 p.m. ET on July 23, 2013. Immediately following the premiere, McGraw will host a twitter chat with fans via @TheTimMcGraw.
“Southern Girl” is the fourth single from McGraw’s Big Machine Records debut project, Two Lanes of Freedom.
“When we started talking about a video concept for ‘Southern Girl,’ I knew that this song belonged to the fans who have been out at our live shows all summer,” says McGraw. “We brought cameras out on the road and turned them around on the crowd, and they really helped us capture the fun summer groove of this song. It seems fitting that country radio would get first crack at this video because they have been such a huge part of making this tour blow up and be so special.”
The entertainer’s Two Lanes of Freedom 2013 Tour will wrap with stops in Toronto, Ontario (July 25), Bethel, N.Y. (July 26) and Virginia Beach, Va. (July 27).