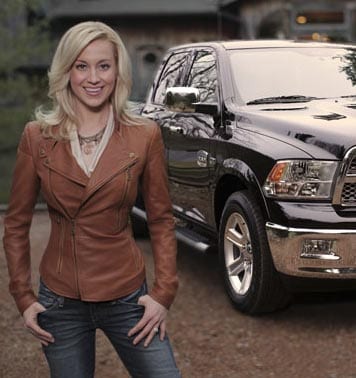 On Tuesday (Jan. 22) Kellie Pickler will be the first of five artists to have their 2012 Dodge Ram Laramie Longhorn truck auctioned as part of Dodge’s “Road to the Ram Jam.”
Five trucks in all will be sold throughout the next three months, to benefit select charities. Other artists taking part include Brantley Gilbert, whose truck will be auctioned off on Feb. 5, Billy Currington (Feb. 19), Zac Brown Band (March 5), and Easton Corbin (March 18).
Pickler’s proceeds will go towards the USO Warrior and Family Care program’s long-term effort to help wounded, ill and injured troops, families and caregivers in recovery.
“I love everything there is to love about my Ram Truck,” said Pickler. “And I have to be honest I am a little sad about giving it up but its for a great cause, and we really want to raise a lot of money for the USO, so please log on and bid.”
Gilbert has selected Iraq and Afghanistan Veterans of America (IAVA) as his charity, while Currington selected Team Rubicon. Zac Brown Band’s proceeds will support Camp Southern Ground, and Corbin is directing funds towards the Freedom Alliance Scholarship Fund.
“The Road to the Ram Jam” series included exclusive video, prizes, free music downloads, as well as a chance to win trips for two to the exclusive Ram Jam concert, held Dec. 29, 2012 in Nashville, Tenn. The show featured performances by all five participating artists. Watch highlights from the concert’s live stream here.
Fans will have two weeks to bid on each truck. To get more information on Pickler’s truck, visit ebay.