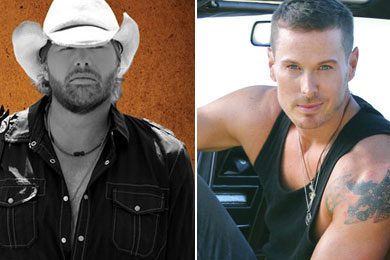 What a sonic harvest we have this week.

Good luck, radio programmers. You’re going to have to make room for a heaping helping of new sounds. The Zac Brown Band has the most beautifully produced single of the week. The Band Perry has the most refreshingly original sound. Amy Rose turns in the finest vocal performance. Kelly Clarkson has the coolest groove. And Tim McGraw is playing at the top of his game. All of these folks deserve massive airplay.

For the Disc of the Day, I am going with the masterful new effort by Toby Keith. He’s playing the part of a bartender with a big shoulder to cry on in “Hope on the Rocks.” And he makes you believe every word of it.

Like Toby, Phoenix Stone writes and produces his own single, as well as singing it well. So he’s taking home this week’s DisCovery Award.

TIM McGRAW/One of Those Nights
Writer: Luke Laird/Rodney Clawson/Chris Tompkins; Producer: Byron Gallimore & Tim McGraw; Publisher: Universal-Careers/Big Red Toe/Amarillo Sky/Big Loud Bucks/Big Loud Songs/Angel River, BMI/ASCAP; Big Machine
—The sound of young love. He and his babe head for the party, dance to a slow tune and get it on later. The whole thing is wrapped up in echoey, wistful nostalgia. Superbly listenable.

TOBY KEITH/Hope on the Rocks
Writer: Toby Keith; Producer: Toby Keith; Publisher: Tokeco, BMI; Show Dog Universal (track)
—Forget what I implied last week. I still do dearly love “Cold Beer Country,” and the label did send it out as a tune to be listened to, but it is NOT the new single. This is. It is the moody, meditative title tune of Toby’s album. The disillusioned and downtrodden find their way into the bartender’s establishment to drown their sorrows. It is superbly written, and he sings the fire out of it. This man is a hoss.

AMY ROSE/I Just Want You to Know
Writer: Gottwald/Sandberg; Producer: After Tuesday Productions; Publisher: Kasz Money/Universal, ASCAP; Wild Rose (www.amyrosemusic.com)
—This was a 2006 hit for The Backstreet Boys, and her version doesn’t countrify the song all that much. That said, her sultry, range-y singing voice is beyond excellent.

ZAC BROWN BAND/Goodbye in Her Eyes
Writer: none listed; Producer: none listed; Publisher: none listed; RPM Entertainment (ERG)
—When they hit those chorus harmonies, I rose right out of my chair. Man, these guys can sing. This is one thrilling, gorgeous and deliciously melodic little record.

JOSIE BRANDON/Crazy Week
Writer: Josie Brandon; Producer: Ian Spanic & Josie Brandon; Publisher: Josie Brandon, ASCAP; Tiger (CDX) (www.josiebrandonmusic.com)
—The song won’t win any contest prizes, that’s for sure. She sings it as loud as she can, but there’s no getting around its lameness.