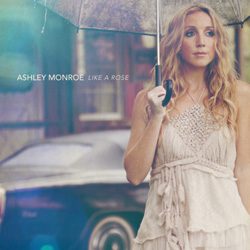 Ashley Monroe’s full-length project, Like A Rose, will be released by Warner Nashville on Mar. 5 to retail and digital outlets.

The 26-year-old singer’s solo project, produced by Vince Gill and Justin Niebank, features a duet with Blake Shelton titled “You Ain’t Dolly (And You Ain’t Porter).”

“We just got the band in a circle and started playing the songs,” Monroe said. “Once we felt like we had a feel for it, I’d do my vocal live—I never went back in to do a second vocal. It felt like a big old family, the way records used to be made.”

Notable co-writers include Guy Clark for the album’s title track, Little Big Town’s Karen Fairchild on “You Got Me,” Jon Randall Stewart for “She’s Driving Me Out Of Your Mind,” and Shane McAnally with “Two Weeks Late.”

Additional album tracks are “Monroe Suede,” “Morning After,” “Weed Instead of Roses,”and a new rendition of “Used” from her 2009 Satisfied album, which yielded two singles, including a duet with Ronnie Dunn.

Her Columbia Nashville side project, Pistol Annies, features Angaleena Presley and Miranda Lambert, whose “Heart Like Mine” Monroe co-penned. The trio’s 2011 project Hell on Heels, continues to produce singles as the band prepares to record a sophomore album.