The big sales news this week (according to Nielsen SoundScan) was Mumford & Sons’ monster 600k debut, Babel. The group scanned an incredible 70% in digital format (420k). It was the highest first week album tally since Drake’s Take Care in Nov. 2011 which logged 630k. Also the largest digital debut since Lady Gaga’s Born This Way in May 2011 (662k). Also significant was Taylor Swift’s new track “Begin Again,” downloaded over 299k times this past week which earned it the top chart position across all track charts.

Overall the country album sales chart remained tepid as it slipped a wee bit deeper into the minus column. But there is activity on the horizon and possibly some new wrinkles on the sales chessboard.

It’s purely speculative at this point, because no one is talking, but Billboard’s recent chart pricing rule may have created a few unintended consequences. You’ll recall last year digital retailers such as Amazon and Google began offering deep discount sale prices on superstar releases such as Lady Gaga, and the chart publication responded. According to Billboard’s Nov. 21, 2011 policy, “Unit sales for albums priced below $3.49 during their first four weeks of release will not be eligible for inclusion on the Billboard album charts and will not count towards sales data presented by Nielsen SoundScan.”

When a digital retailer decides to sale price a new superstar album at 99¢ or $2.99 it is a calculated move. In most cases they must still pay full wholesale price to the label and therefore lose money on each unit sold. The retailer accepts losing one or two million dollars on this “loss leader” promotion because, in exchange, it gets bona fide customers who set up accounts and get their credit cards into the system. Actually, it turns out to be pretty powerful advertising for the retailer when the album/artist is powerful enough to bring in new customers. Upcoming country music releases from Taylor Swift (10/22) and Jason Aldean (10/16) might just be the kind of product that would fit that profile.

Deep price discounts devalue music in the long term, but short term no one gets hurt, because labels, artists and songwriters are getting paid their regular rate and the pricing boosts unit sales.

But wait.
With the introduction of the new chart rule, units priced below $3.49 won’t count. Not on the chart and not on the SoundScan numbers. For a superstar, wanting to show great sales numbers, losing some possibly large chunks of digital sales could make a very strong launch look less successful. Ouch!

So I can’t help but wonder if this well-meaning, but badly worded $3.49 chart edict has armed retailers with a new weapon, possibly setting off a new round of back room negotiations in the process. The risk of uncounted chart sales could pressure labels to offer incentives that previously weren’t necessary.

Frankly, I don’t support cut rate pricing, especially on great, proven music. But, when it comes to charts it’s also a dangerous precedent to start messing around with reality and arbitrarily count some sales while ignoring others. A better solution might be to gather pricing information and report how many units were sold at various price points.

What are your thoughts? Leave ‘em below or email me at [email protected].

On The Charts
Jake Owen bounded onto the No. 2 position on this week’s Top current Country chart with his Endless Summer 4 song EP (17k; 94% digital; $3.99 at Amazon and iTunes). Little Big Town retained its firm grip on the Top spot for a third week adding almost 34k new units to an RTD of 197k. 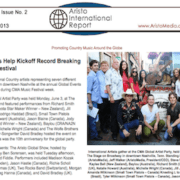