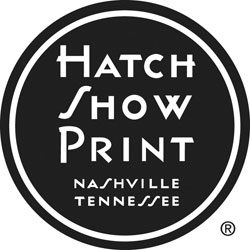 Hatch Show Print, the venerable letter press shop owned and operated by the Country Music Hall of Fame and Museum, is getting a new home. In late 2013, Hatch will move from its current location at 316 Broadway into a new, custom space inside the expanded museum.

“Hatch Show Print’s move to our expanding museum campus is the logical next step in our decades-long effort to preserve the shop,” said Museum Director Kyle Young. “It is entirely fitting that the shop, with its venerable history and invaluable collection of carved wood blocks, will reside permanently at the museum. For more than 20 years, the museum has labored to safeguard Hatch and its legacy, and this is the culmination of that work.”

Founded in 1879, Hatch is one of the country’s oldest letterpress shops and has a history closely associated with early country music stars and Southern entertainment. The shop has moved seven times over the last 133 years. In 1986, it was purchased by Gaylord Entertainment Company who asked the museum to curate it. In 1992, the shop was donated to the museum and moved to its current Broadway digs. Jim Sherraden serves as the shop’s Curator and Manager.

“Hatch will continue to operate as it always has,” added Young. “In its new space on the museum’s first floor, Hatch will have an expanded production area with an adjacent retail site. Floor-to-ceiling glass windows on one wall of the production space will allow visitors to watch as designers lay out type and print posters on the letterpresses. We’ll even have a dedicated design space where Hatch staff can offer hands-on demos to visitors at designated times.”

Admission to the store will be free, and a new entrance on 5th Ave. S. will give outside visitors access.