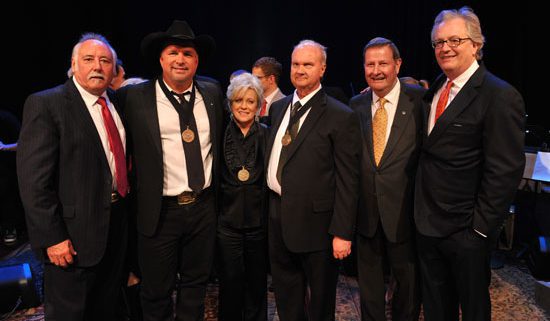 This year’s Medallion Ceremony inducting Hargus “Pig” Robbins, Connie Smith and Garth Brooks into the Country Music Hall of Fame was noteworthy and special for a number of reasons.

First and most obvious was the caliber of the inductees. Second was the quality of its musical performances. Third was the welcome and supportive attendance of an unusually large number of prior inductees.

Among those offering the most outstanding tributes in song were Vince Gill & Jeff White, Gene Watson, The Quebe Sisters Band, The Whites, Lee Ann Womack, Bob Seger and honorees themselves, Connie Smith and Pig Robbins. Chairman of the Board Steve Turner welcomed the crowd, saying, “We gather here for powerful words and music.” CMA CEO Steve Moore praised all three inductees. The CMA underwrites this annual event.

Young added to Turner’s remarks, stating of all three inductees, “They are known as remarkable human beings as well as remarkable artists.” He then proceeded with the presentations.

Tennessee native Hargus Melvin Robbins, a beloved member of Nashville’s “A-Team” of session musicians, went blind at age 3 after an accident with a knife. He acquired his nickname while attending Nashville’s School of the Blind. Early recording efforts were as “Mel Robbins.”

When Floyd Cramer went off on a solo career, the piano slot in the A-Team opened up for Robbins. As a session musician, his first hit was 1959’s “White Lightning” by George Jones. With John Hobbs handling the rapid-fire keyboard work, Ronnie Dunn performed the song using Mason jars full of clear liquid as props. Joining Hobbs was the rest of the All-Star Medallion Band – Paul Franklin, Eddie Bayers, Brent Mason, Michael Rhodes, Deanie Richardson, Biff Watson, Dawn Sears and Jeff White. This is their eighth year to perform at the ceremony.

Crystal Gayle’s “Don’t It Make My Brown Eyes Blue” is also noted for its distinctive Robbins piano notes. Gordon Mote accompanied her brilliantly as she recreated the classic.

Young noted that a who’s-who of country stars has benefited from the session musician’s keyboard work. “I Fall to Pieces,” “Back in Baby’s Arms,” “Detroit City,” “King of the Road,” “The Gambler” and “Any Man of Mine” are just a few of the standards he’s played on. Robbins has also backed Bob Dylan, Joan Baez, Neil Young and a host of other pop stars.

The first big ovation of the night went to Gene Watson’s “Fourteen Carat Mind,” with Robbins-style piano provided by Dirk Johnson. Watson nailed the song. I’ve been a loyal fan and wasn’t surprised, but you could tell he was a revelation to many in the crowd.

Fellow session star Charlie McCoy presented Robbins’ medallion. “Tonight, we really got it right,” said McCoy. “He’s not only a great musician, he’s got an amazing memory.” McCoy recalled an electrical black-out that once occurred at the Quonset Hut. “Anybody that wants to go to the bathroom, I’ll take you there for a dollar,” wise-cracked Robbins.

“I’m so honored to become a member of this organization, with Harold and Charlie and Floyd,” said Robbins. “I don’t know how many times I can say Thank You.”

He took the piano bench to back Ronnie Milsap, who initially sat on his stool not facing the audience. After he was adjusted, Milsap quipped, “Pig and I are driving home tonight!”

“Congratulations, Mr. Pig Robbins, you are now in the Country Music Hall of Fame, where you belong!” Milsap added. He sang “Behind Closed Doors,” which also features some of Robbins’s most memorable piano work. Robbins was awesome in reviving it with his still-dexterous digits. Young began to relate honoree Connie Smith’s bio, then called The Quebe Sisters Band to the stage to sing and swing Smith’s breakthrough hit, “Once a Day.” The Quebes are from Ft. Worth, but regularly come to Nashville to perform on the Opry and on the TV show of Smith’s hubby, Marty Stuart. The gals harmonized flawlessly and dazzled the attendees with their triple fiddling.

The Whites are Smith’s buddies on the Opry. “We learned your songs off the radio,” said Sharon White. “They were playing them so much, we learned it in one day,” added Cheryl White, referring to Smith’s “Just for What I Am.” “You were the road map for so many girl singers,” Cheryl added. “You have been a sister to us.” The family sang a spirited version of “If It Ain’t Love (Let’s Leave It Alone)” in Smith’s honor.

Lee Ann Womack provided a torchy “You’ve Got Me (Right Where You Want Me),” which Smith co-wrote. “All the girl singers want to sing like Connie,” said Womack. “She delivered with such class.”

Merle Haggard did the induction honors. “If you’re talking about a country singer, there just isn’t no better,” he said.

“I just wanted to sing, and I just wanted to feed my kids,” said Smith. “I truly believe this was my destiny. God meant for me to be a country girl singer….Most of all, I want to thank the Lord. Because He’s there even when you think you don’t need Him.” Her awesome vocal sustains and dynamics were on full display as she sang “When I Need Jesus, He’s There.”

Young noted that Garth Brooks, “Took country music into the stratosphere. No one sold more records in the 1990s than Garth Brooks.” George Strait saluted Brooks with “Much Too Young (To Feel This Damn Old).”

“What great performances tonight,” exclaimed Bob Seger. “What fun! Thank you.” Keeping Taylor’s stellar backing trio, he delivered “That Summer” with enormous élan. Come to think of it, the Brooks hit does kinda sound like a Seger song.

Strait inducted Brooks: “Thank you, Garth, for letting me be a part of this special night for you. Passion describes him the best. He blew it up. You can see it in a lot of the young acts out there today who were influenced by you.”

In his acceptance, Brooks did shout-outs to Seger, Strait, Taylor and George Jones, to his business team, to his session instrumentalists, to his producers and to his fans. “Country music has the greatest and most loyal audience,” he said. Brooks concluded with a heartfelt homage to daughters Taylor, August and Allie, as well as to wife Trisha Yearwood.

The night’s performers, as well as all of the Hall of Famers, took the stage for the finale “Will the Circle Be Unbroken.” Bob Seger looked like he was having the time of his life. Seger, Smith, Brooks, Brenda Lee, Emmylou Harris and others passed the mic around for lead-vocal turns. Bass harmonizing Ray Walker monopolized one mic, as usual. At the post-ceremony cocktail supper, we dined on succulent beef tenderloin and/or tender turkey breast slices with a variety of toppings, superb wilted lettuce salad, equally yummy deviled eggs, roasted veggies, a variety of delish cheesy pastas in martini glasses, dessert fruit tortes and pumpkin-mousse squares. Then off into the balmy fall night we departed, with our tummies, as well as our hearts and spirits, full.