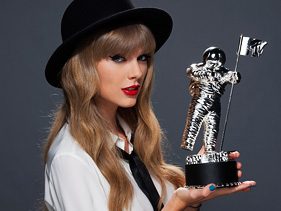 Taylor Swift made music history today (8/22) when her single “We Are Never Ever Getting Back Together” debuted with sales of 623k downloads (Nielsen Soundscan). This feat earned her the record for best digital sales week by a female artist. It also ranked her second in overall single-week sales, behind Flo Rida’s 2009 hit “Right Round” which moved 636k copies.

In more Swift news, she will perform at the Sept. 6 MTV VMA Awards, where she is set to debut a song from her upcoming fourth studio album Red. The show will air at 8 PM/ET.

Swift has also opened a contest allowing one college or high school to win an acoustic concert with her this fall as part of VH1’s Storytellers series. Through Sept. 23 students can vote for their school and find details at www.taylorswiftoncampus.com. Additionally, the top five schools with the most votes will each receive a $10,000 grant for their music department from Swift and Chegg’s philanthropic program, Chegg for Good, which inspires students to be a catalyst for change. VH1 Storytellers: Taylor Swift will air Sat., Nov. 11 at 6 PM/ET.