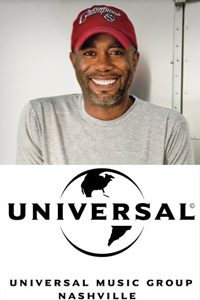 Universal Music Publishing Group (UMPG) and Darius Rucker have extended their worldwide publishing agreement. The contract encompasses his previous works and his next album, due in 2013.

“Darius has raised the bar with his upcoming album and we look forward to many more years of hit songs,” said Kent Earls, UMPG Nashville EVP/GM.

“UMPG has been a partner from the beginning and they are as passionate about my music as I am,” shared Rucker. “For me, that’s what’s it’s all about.”

Rucker has released two albums with Capitol Nashville including his platinum-selling debut album, Learn to Live, and 2010 sophomore release Charleston, SC 1966. Collectively, the projects have produced five No. 1 songs, each co-written by Rucker, including “Don’t Think I Don’t Think About It,” “It Won’t Be Like This For Long,” “Alright,” “This” and “Come Back Song.” Rucker’s first single off his upcoming album, “True Believers,” is set to impact radio this month.

Rucker, managed by McGhee Entertainment, has sold over 25 million albums – both as a solo artist and as a member of the band Hootie & the Blowfish. 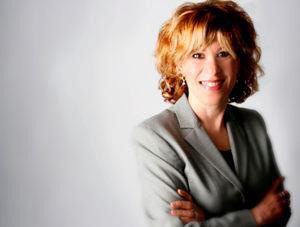 Music industry veteran Connie Baer has re-joined The Gary Group as Vice President of Strategic Initiatives and will be based in Nashville, marking the marketing agency’s first permanent Music City presence. In her new role, Baer will be responsible for creating and executing campaigns for its clients, as well as building new relationships in the Middle Tennessee area.

“We continue to be very committed to supporting our Nashville clients,” says Rick Rogers, President, The Gary Group. “Given today’s marketing challenges and emerging creative and digital technologies, we are stepping up our efforts to help our clients capitalize on opportunities with urgency. We are thrilled to have Connie back with us. She is one of the industry’s leading creative thinkers. With Connie’s tremendous experience in music marketing, promotion and distribution as well as so many other facets of the entertainment industry, along with her personal experience and knowledge of Nashville, we will provide our clients an undeniable marketing edge going forward.”

Baer served as VP Promotion/Marketing at The Gary Group’s Los Angeles offices for over a decade and worked on campaigns for numerous brands including record labels, artists, casinos, HBO, AT&T, Folgers and more. She moved to Nashville to assume the VP Marketing post at Sony Music, and also spent time with Giant Records, Imprint Entertainment, Watkins College of Art, and peermusic.

Andy Moats has been promoted to Bank Group Director and is responsible for management of the bank’s Private Client Banking team, Music & Entertainment Division, Business Banking, as well as oversight of retail banking growth and client service. He joined Avenue Bank in 2006 and brings more than 12 years of commercial banking experience. He remains Executive Vice President and Chief Credit Officer, with continued responsibility for management of Credit Underwriting and Credit Strategy.

Aaron Dorn has been named Vice President, Director of Concierge Banking, responsible for management of the bank’s retail banking team and four branch locations. He was one of the original group of employees who started Avenue Bank in 2006. In 2009 he joined the United States Marine Corps, and returned to Avenue Bank upon completion of his military service in June 2012.

Mallory Bishop has been promoted to Assistant Vice President, West End Branch Manager. She joined Avenue Bank as a Concierge Banker in 2009.

Chris Schlueter has been promoted to Business Banking Manager and is responsible for business development and management of the bank’s new team dedicated to small business owners and their companies. He most recently served as the Branch Manager of the bank’s West End location, the role he held since the branch location’s opening in 2008.

John Moore has been promoted to Senior Vice President, Private Client Banking Manager. He joined Avenue Bank when it opened in July 2007. 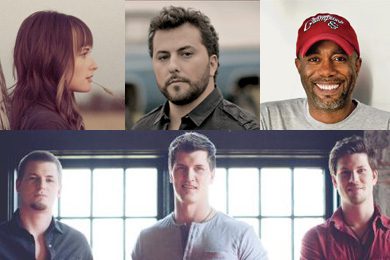 There’s a star in our winner’s circle, but the day belongs to little lights who twinkle a little less brightly.

Darius Rucker rides away with a Disc of the Day award for singing and co-writing the pulse quickening “True Believers.” It’s a song for lasting lovers everywhere.

But right behind him is a gaggle of unknowns, clamoring to be heard. Three of them are getting DisCovery Awards this week. Our Female DisCovery is Kacey Musgraves, who has an outstanding song. I first heard “Merry Go ‘Round” when she sang it earlier this year at CRS. It and she both blew me away then, and they did so again today.

The Male DisCovery Award goes to Tyler Farr, who has the outstanding voice, as well as a finely crafted song. “Hello Goodbye” pushed all my buttons.

The Group DisCovery Award goes to a sibling trio called High Valley. Their debut disc scores points for production excellence, as well as vocal performance. High Valley has already had several hits and awards nominations in its Canadian homeland.

LISA MATASSA/Somebody’s Baby
Writer: Kelly Archer/Casey Koesel/Justin Weaver; Producer: Tony Bruno; Publisher: Pubple Cape/ole/Major Bob/Music of Stage Three, BMI; 9 North/
itishwhatitis (www.lisamatassa.com)
—Mama sends her on her way with uplifting advice and assurance that home will always be there. Matassa attacks this tempo tune with gusto and admirable self assurance. Tell that rock guitarist to get out of her way.

HIGH VALLEY/Love You For a Long Time
Writer: Jared Crump/Ben Stennis/Brad Rempel; Producer: Phil O’Donnell & Jeremy Spillman; Publisher: Pickin’/BMG Chrysalis/Songs of Kickingbird/Bug/Songs of Windswept Pacific/Big Brave Bendito/Centricity, BMI/SESAC/SOCAN/ASCAP; Eaglemont (www.highvalleymusic.com)
—Male trio harmonies atop a beefy, rocking track. If you’re not bopping along by the second chorus, there’s something wrong with your rhythm mojo. Loved it, loved it, loved it.

THOMAS RHETT/Beer with Jesus
Writer: T. Rhett/Rick Huckaby/Lance Miller; Producer: Jay Joyce; Publisher: EMI Blackwood/Cricket on the Line/Songs of Stylesonic/Melvin’s Pistol/Melvin’s Bullets/13th Avenue/I-40, BMI/SESAC; Valory Music
—Awesome. Only in country music will you find a song this simultaneously poignant, wry, emotionally honest, courageously creative and heartfelt. Rhett’s drawling, countryboy delivery of it is completely believable and absolutely perfect. This is the kind of thing we do best.

ATTERBERRY STATION/Fool’s Game
Writer: none listed; Producer: Cody Braun; Publisher: none listed; AS (track)
—Country rock, served up with relentless guitar grooves and steady-as-she-goes rhythmic propulsion. Roll on down the highway with this cranked up in your car speakers.

DARIUS RUCKER/True Believers
Writer: Darius Rucker/Josh Kear; Producer: Frank Rogers; Publisher: Universal/Cadaja/Global Dog/Big Yellow Dog/Lunalight, ASCAP; Capitol (CDX)
—Surprisingly stirring. He really gets inside this thumping ode to an enduring love story. The chorus has more hooks than a tuna boat. The underscored strings at the bridge tickle your heartstrings and by the time of the final guitar chimes, you’re a complete goner.

CRAIG MORGAN/More Trucks Than Cars
Writer: Craig Morgan/Phil O’Donnell/Craig Wiseman; Producer: Craig Morgan & Phil O’Donnell; Publisher: Big Loud Shirt/Big Loud Bucks/Sixteen Stars/Rooster Pecked/CMOGO, ASCAP/BMI; Black River (CDX) (615-780-3079)
—The lyric touches on all the backwoods cliches about how much better country folks are than city dwellers. He can do better, and has. Just so you know, neither grits nor biscuits are on my list of favorite foods. 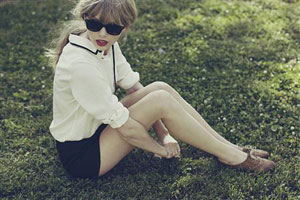 Taylor Swift will receive the CCMA Generation Award, a new accolade created in conjunction with the Canadian Country Music Association’s 30th anniversary. The award is designed to honor an artist expanding the global popularity of country music.

“With her increased and continual success on the international scene, Taylor Swift embodies every aspect of the CCMA Generation Award,” said Ted Ellis, Chair of CCMA Board of Directors. “Since 2010, she has not only become the biggest-selling country artist in Canada, she is also one of the top selling artists in the world, across all genres. Taylor has already been recognized with over 100 prestigious international industry honors (including three previous CCMA awards for Top Selling Album) and she maintains a connection with her 200 million fans online daily.”

She will attend the 2012 CCMA Awards in Saskatoon, which will be broadcast live across Canada on Sun., Sept. 9 at 8 PM/ET on CBC, with encore airings on CMT Canada starting at 10 PM/ET.

Swift will also debut the music video for her current single “We Are Never Ever Getting Back Together” on Thursday (8/30). The video will air simultaneously on MTV and CMT at 7:49 PM/ET. 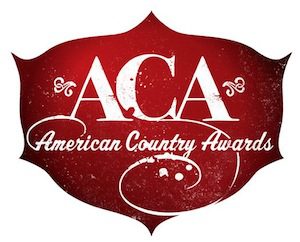 Trace Adkins and Kristin Chenoweth will return as hosts of the third annual American Country Awards, airing from Las Vegas’ Mandalay Bay this December on FOX. Nominations will be announced soon.

The American Country Awards gives fans the opportunity to vote for their favorite artists in traditional awards categories as well as other areas including touring.

“The ACAs honor the best and brightest of country music, from the hotshot breakthrough artists to the icons,” said Adkins. “I’m looking forward to cutting loose again with Kristin, who’s quite the firecracker comedienne, while we also take viewers through an evening of great music and awards.”

“I’m excited to return to the ACA stage with Trace and his big personality and even bigger boots,” said Chenoweth. “We had a blast last year and I plan to pull out all the stops to make sure everyone has a good time!” 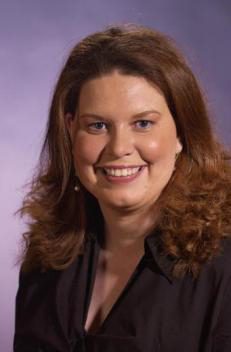 Jill Napier has joined business management firm Martin, Allbee & Associates where she will oversee accounts payable for all of the firm’s clients.

“I have known Jill for many years through SOURCE and Leadership Music and knew all her peers have the highest regard for her. She is a strong addition to our already accomplished team,” said Lainie Allbee, General Manager of Martin, Allbee & Associates.

Napier’s civic and industry involvement includes Administrative Director for the newly formed Nashville chapter of the Association of Independent Music Publishers, Leadership Music, SOURCE Treasurer and Foundation Award board member, Copyright Society of the South board member, Hats Across The Row committee member and the Music City Tennis Invitational.

She can be reached at [email protected].

The Tennessee Radio Hall of Fame is accepting nominations for its 2013 class until Fri., Oct. 1. To submit a nomination, click here to access the form. 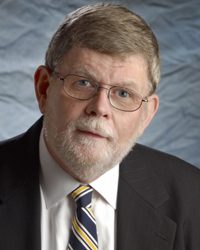 A complete package of consulting services including recurrent and gold lists, a confidential weekly music memo, market-specific recommendations, email reminders, and music calls are available to clients in addition to the playlist. 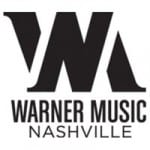 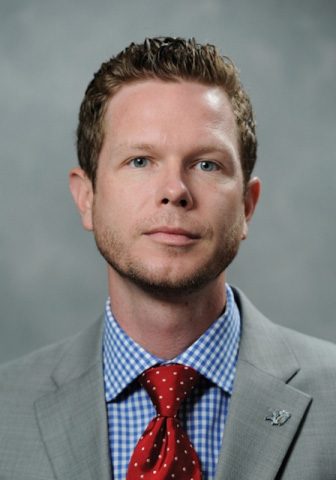 Country Radio Seminar has announced the hiring of Bradford Hollingsworth as Director of Brand Marketing and Strategic Partnerships.

Hollingsworth joins the Country radio organization as a former account executive with the Nashville Predators, where he excelled in corporate sponsorship sales and worked with brands including Delta Dental, Goo Goo Cluster, Gaylord Entertainment, Patron Spirits and Ticketmaster, among others. Prior to his position with the Predators, Hollingsworth served in a similar marketing and sponsorship post with the Detroit Pistons.

“I am extremely excited to have Bradford join our CRS team in the role of Director Brand Marketing and Strategic Partnership,” said CRS Executive Director Bill Mayne. “He brings a wealth of energy, creativity, passion and expertise to join with Michelle Kammerer in providing our partners and sponsors the best service and branding opportunities for CRS 2013 and beyond!” 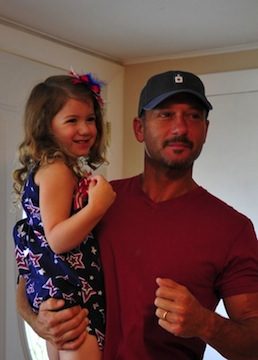 Tim McGraw presented 25 mortgage-free homes to veterans through his Operation HomeFront initiative during his summer tour. He wrapped the program at last weekend’s concert in Boston. At each tour stop the veteran and his or her family had the opportunity to meet McGraw.

“Each family had touching stories and made an indelible mark on me,” said McGraw. “The need to take care of the men and women who fight and sacrifice so much for us is great, and this program is only making a dent. I definitely hope to do more down the road.”

After wrapping the record-breaking Brothers of the Sun Tour with Kenny Chesney, McGraw is preparing for Soul2Soul at The Venetian in Las Vegas with Faith Hill, running December 2012 through April 2013.