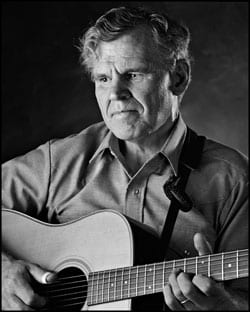 Born Arthel Lane Watson in Deep Gap, NC, he was bestowed with the nickname “Doc” during a live broadcast when the announcer said he should have an easy nickname and an audience member shouted out “Call him Doc!” The name stuck with him the rest of his life.

Watson was blind since before he was one year old, and attended North Carolina’s school for the visually impaired in Raleigh. When he was 13, he taught himself how to play “When The Roses Bloom in Dixieland” on a borrowed guitar, and his father bought him a $12 Stella as reward.

In 1947, he married Rosa Lee Carlton, daughter of fiddler Gaither Carlton, and they had two children Eddy Merle and Nancy Ellen. Watson’s first paying gigs were with a local rockabilly/swing band, but he became a full-time professional with the folk/traditional music revival of the 1960s. His self-titled solo debut appeared in 1964, and he was represented until his passing by Folklore Productions.

Watson and his son Merle began touring together in the late 1960s, with Merle playing guitar and banjo in addition to serving as driver. During this time the pair began to reach a worldwide audience, helped by collaborations with Flatt & Scruggs, Chet Atkins and the Nitty Gritty Dirt Band. Merle passed away in 1985 after an accident on the family farm, but his legacy has been carried on with the annual MerleFest music festival in Wilkesboro, NC.

Over the course of his career, Watson recorded more than 50 albums and won eight Grammy Awards, including a Lifetime Achievement Grammy. He was also a recipient of the National Medal of Arts, and a National Heritage Fellowship. In 2011, a life-size statue of Watson was unveiled in Boone, NC on the spot where he used to play for tips. At his request, the statue’s inscription reads “Just One of the People.”

His unique and innovative style of guitar picking influenced scores of guitarists who followed, and his repertoire of American music was vast. President Bill Clinton said, in awarding Watson the National Medal of Arts, “There may not be a serious, committed Baby Boomer alive who didn’t at some point in his or her youth try to spend a few minutes at least trying to learn to pick a guitar like Doc Watson.”