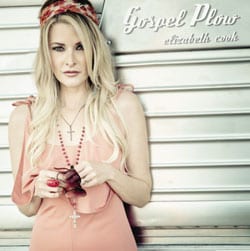 Elizabeth Cook will release her Gospel Plow EP on Tuesday, June 12, and is hitting the road this summer to support the release.

Cook was inspired to record Gospel Plow after participating in the California-based Strawberry Music Festival’s Sunday morning gospel show in 2011 and being moved by the music. The resulting collection features six of Cook’s favorite Southern gospel songs and a cover of Velvet Underground’s “Jesus.”

On Wednesday, June 13, Cook will perform on The Late Show With David Letterman. She previously appeared on the show as a sit-down guest. Additionally, she and her band (featuring her husband Tim Carroll on guitar and Bones Hillman of Midnight Oil on bass) will be on tour throughout summer. Full dates here.