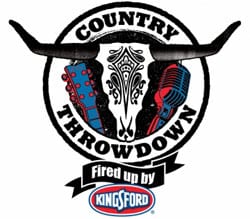 The public can nominate a military family whose family member is active duty military or received an honorable discharge within the last two years, resides in the continental United States, and served or is serving any branch of service, including the Guard and Reserve. Nominations will be received from May 24 through June 25.  Check contest rules for specific entry periods.

Concert locations include Glen Allen, VA (June 13), Pittsburgh (June 16), Milwaukee, WI (June 28), Chicago (June 30), and Nashville (July 8). Winners selected for each city will be flown courtesy of Southwest Airlines, receive hotel accommodations, four tickets to the concert, a chance to stand side stage, a meet and greet with Gary Allan, and a pair of the Boot Campaign’s “Give Back Boots.”

“As we roll into our third summer of Country Throwdown, the team put together a can’t-miss package for true country fans, and we’re excited to spotlight some of country music’s greatest acts,” said tour co-founder and co-producer Sarah Baer.