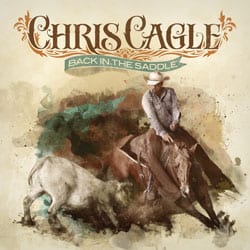 Bigger Picture Group artist Chris Cagle will release his fifth studio album, Back In The Saddle, on June 26, 2012. The album is his first since joining Bigger Picture’s artist roster.

Back In The Saddle was produced with Keith Stegall (Zac Brown Band, Alan Jackson) and features Cagle’s current single “Got My Country On.” Cagle wrote five of the 11 tracks on the album, which also features contributions from Danny Myric, Kim Tribble, the Warren Brothers and more.

“The experience I’ve had making this record has rekindled the passion I had for music when I recorded my first record,” says Cagle. “Back In The Saddle is my life! I wouldn’t change anything about it; it is a record that I can live or die by and be content. I have given the fans my heart and soul, if it’s not good enough, I can live with it. If it is good enough, well then, I can’t wait to see what happens!”

Cagle will be in Nashville for CMA Music Festival next week before heading back out on the road to visit radio and play concert dates. He is scheduled to host his 2nd Annual Unbridled Concert on Friday, June 8 at the Wildhorse Saloon. The event benefits Saddle Up, a therapeutic horseback riding program for physically and mentally challenged children. More info here.