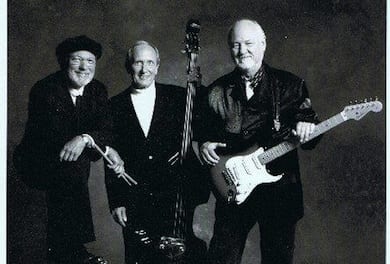 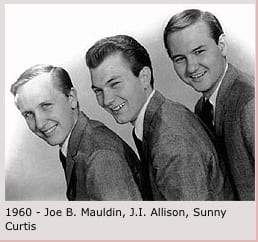 Middle Tennesseans Jerry Allison, Sonny Curtis and Joe B. Mauldin will be among those entering the Rock and Roll Hall of Fame next month.

They are being inducted, along with the late Nikki Sullivan, as members of The Crickets. They recorded such hits as “That’ll Be the Day” and “Peggy Sue” with Buddy Holly. Following his 1959 death, the band continued to tour and record well into the 1990s. See full bio here. The Crickets were inducted into Nashville’s Musicians Hall of Fame in 2008.

The band is among several being honored with special inductions, including The Miracles, The Comets, The Blue Caps, The Famous Flames and The Midnighters.

The frontmen of all six bands have already been enshrined as solo members of the Hall. The Crickets’ Buddy Holly and The Famous Flames’ James Brown were inducted in 1986. The Miracles’ Smoky Robinson and The Comets’ Bill Haley were inducted in 1987. Hank Ballard of The Midnighters joined the Hall in 1980, and Gene Vincent was inducted in 1998 without his Blue Caps.

The six new inductions are the result of “a special Rock and Roll Hall of Fame committee review,” according to a recent press release from the organization. The bands’ names will be placed alongside their lead singers.

“These inductees are pioneers in the development of the music we call rock and roll,” said Joel Peresman, president and CEO of the Rock and Roll Hall of Fame Foundation. “As part of our mission to recognize the most impactful, innovative and influential artists in rock, the committee brought forth these six groups who belong in the Hall of Fame.”

This month’s Goldmine magazine says that these six inductions, “right some pretty serious wrongs.” The magazine and its readers have frequently criticized the Hall of Fame for its oversights.

Among those often cited as being repeatedly overlooked by the Hall are Chicago, Kiss, Linda Ronstadt, Paul Revere & The Raiders, Rush, Connie Francis, Neil Sedaka, The Moody Blues, The Monkees, The Clovers, Deep Purple, The Guess Who, Heart, Grand Funk Railroad, Bon Jovi and The Doobie Brothers. None of them have been made Hall of Fame members. Until now, The Miracles and The Crickets were on this list as well.

The 2012 Rock and Roll Hall of Fame inductions will take place in Cleveland’s Public Hall on Saturday, April 14. 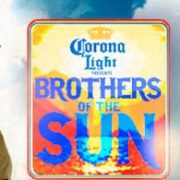 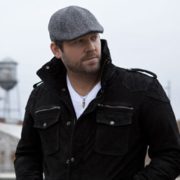 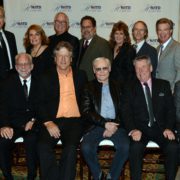 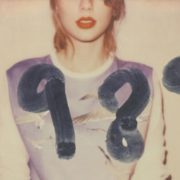 Lee Brice: Singing It, Selling It, Living It