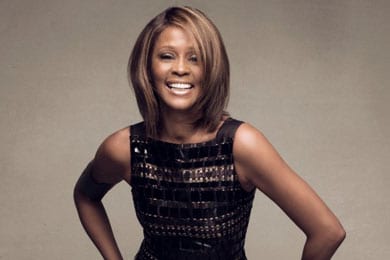 Pop superstar Whitney Houston passed away at the Beverly Hilton hotel on Saturday, Feb. 11. She was 48 years old. Cause of death has not yet been determined.

One of the greatest singers to step in front of a microphone, Whitney Elizabeth Houston was born in 1963 to a musical family that included her gospel singer mother Cissy Houston, cousins Dionne Warwick and Dee Dee Warwick, and godmother Aretha Franklin. She was discovered by Arista Records head Clive Davis in New York City, who helped propel her on to stardom.

Over the course of her career, she released seven studio albums and three movie soundtracks, all of which have Gold or higher sales certifications. Her numerous accomplishments include earning six Grammys, two Emmy Awards, and many other awards. Houston’s run of seven consecutive No. 1 singles on the Billboard Hot 100—”Saving All My Love For You,” “How Will I Know,” “Greatest Love of All,” “I Wanna Dance With Somebody (Who Loves Me),” “Didn’t We Almost Have It All,” “So Emotional,” and “Where Do Broken Hearts Go”—is still unmatched.

Houston landed her first acting role as the star of The Bodyguard (1992). Her version of Dolly Parton’s “I Will Always Love You,” featured on the blockbuster soundtrack, went on to become the best-selling single of all time. The soundtrack won the 1994 Grammy Award for Album of the Year.

“Mine is only one of the millions of hearts broken over the death of Whitney Houston,” commented Dolly Parton. “I will always be grateful and in awe of the wonderful performance she did on my song and I can truly say from the bottom of my heart, Whitney, I will always love you. You will be missed.”

Houston’s work also intersected with Nashville’s gospel community on The Preacher’s Wife soundtrack, one of the best-selling gospel albums in history. Houston starred in the film and performed songs on the soundtrack that were penned by Kirk Franklin and Dottie Rambo, among others.

She married R&B singer Bobby Brown in 1992, and gave birth to her only child Bobbi Kristina Houston Brown in 1993. Their tumultuous relationship was beset by rumors of drug use, and the couple divorced in 2007. Houston mounted a comeback in 2009 with singles “I Look To You” and “Million Dollar Bill,” coming clean about her past drug use in an interview on The Oprah Winfrey Show.

Houston had performed at Grammy nomination party in Los Angeles for R&B singer Kelly Price on Thursday (Feb. 9), and was slated to attend a pre-Grammy party Saturday thrown by Clive Davis in the hotel where she died. Bobby Brown was scheduled to perform with his group New Edition in Nashville Sunday night (Feb. 12), but pulled out of the show last minute to join his daughter in Los Angeles.